“I am a 14-year-old!” the boy in the video footage screams, as the cop continues to hold him and the dog bites him. 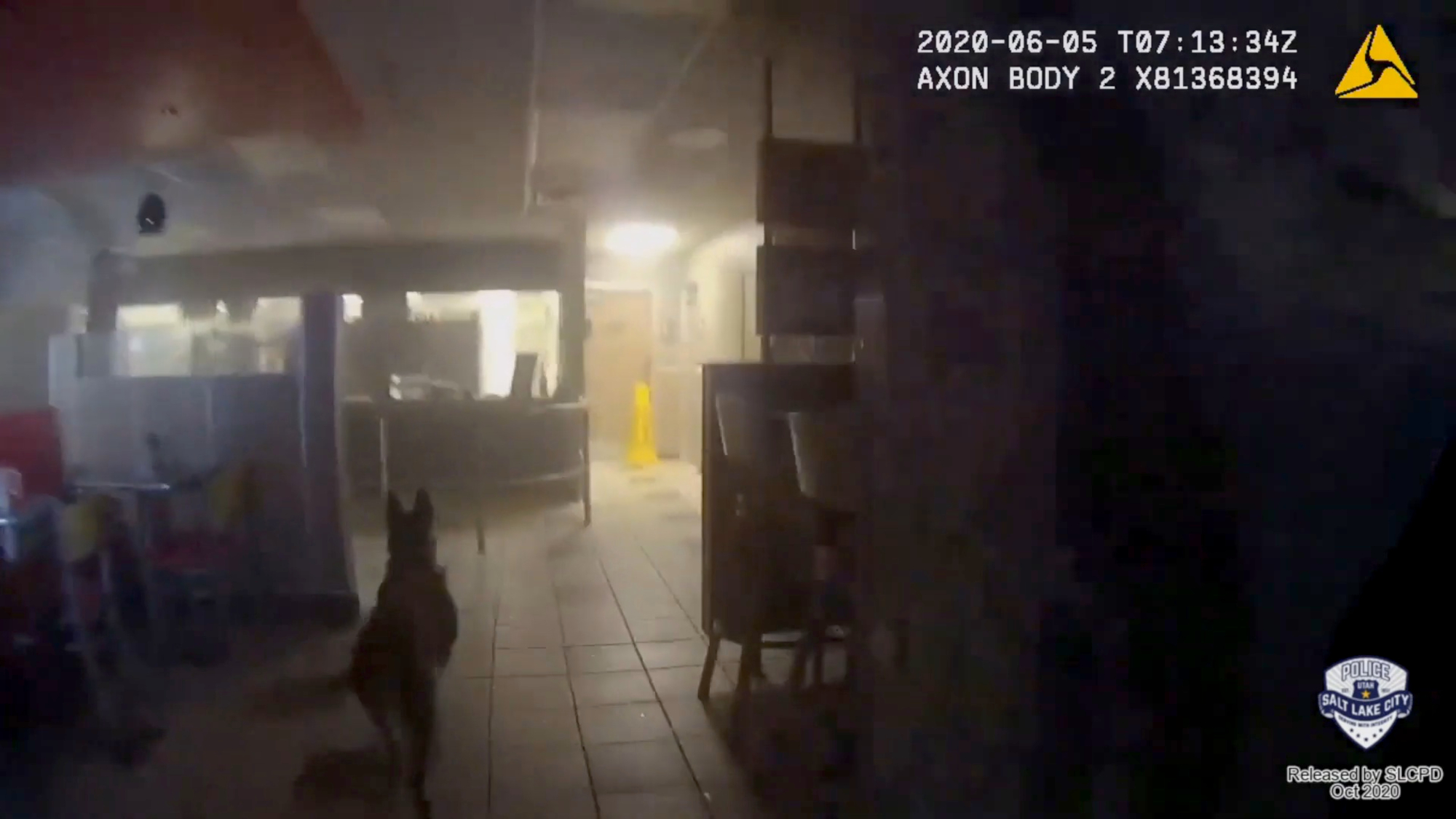 The police officer and K9 entering the place where the suspect is located. (Newsflash)

Police have released footage “in the interest of being transparent” showing an officer ordering a K-9 unit to bite a schoolboy suspect.

Officers from the Salt Lake City Police Department captured the moment they detained an unnamed juvenile suspect in Salt Lake City, Utah, on June 5. The video, however, has just been released by police, following an audit that investigated 34 cases of the department’s K-9 Apprehension Program spanning back to 2016.

The footage shows the moment the K-9 handler, whose name has not been given, stands at the door of the establishment and yells at the suspect inside, warning him of the police dog if he fails to comply.

“He has scissors in his hands,” an officer is heard saying, stopping the handler from deploying the dog but keeping it on high alert.

The person inside yells back at the police and refuses to exit. The handler deploys the dog after an officer notes the suspect “dropped the scissors” and commands the dog to find the suspect.

The cops follow the K-9 unit into the establishment, which appears to be a restaurant, where they find the suspect standing on a counter.

“I don’t have a weapon,” the teen is heard yelling as the handler commands the dog to attack.

The handler approaches the suspect, takes him down, and then pins him against the floor as the police dog begins its attack.

“I am a 14-year-old!” the boy screams as the cop continues to hold him and the dog bites him.

The juvenile suspect was found trying to start a fire when he was detained by police. No further information was given on the case.

However, the police department reported the “K-9 Apprehension Program and the four dual-purpose dogs associated with it remain suspended indefinitely,” according to a statement released with the footage.

“Officers involved in the cases have been placed on administrative leave pending the outcomes of the investigations,” it added.

Authorities are now “taking initiatives to conduct similar audits in all divisions of the police department,” according to Salt Lake City Police Chief Mike Brown.

Of the 34 cases that were investigated, 19 were referred to the District Attorney’s Office for further review. It is not known when the investigations will conclude.

The release come amid national discussion about policing and criminal justice, sparked by the May death of Minneapolis resident George Floyd while in police custody. The incident set off a wave of protests and counter-protests, fueled as well by the cases of Breonna Taylor, who was shot in March by police with a search warrant during a raid shortly after midnight, and Ahmaud Arbery, whose March death was captured on video.

Only after the video went viral in May did police arrest the three white men suspected of shooting Arbery while he was out jogging.