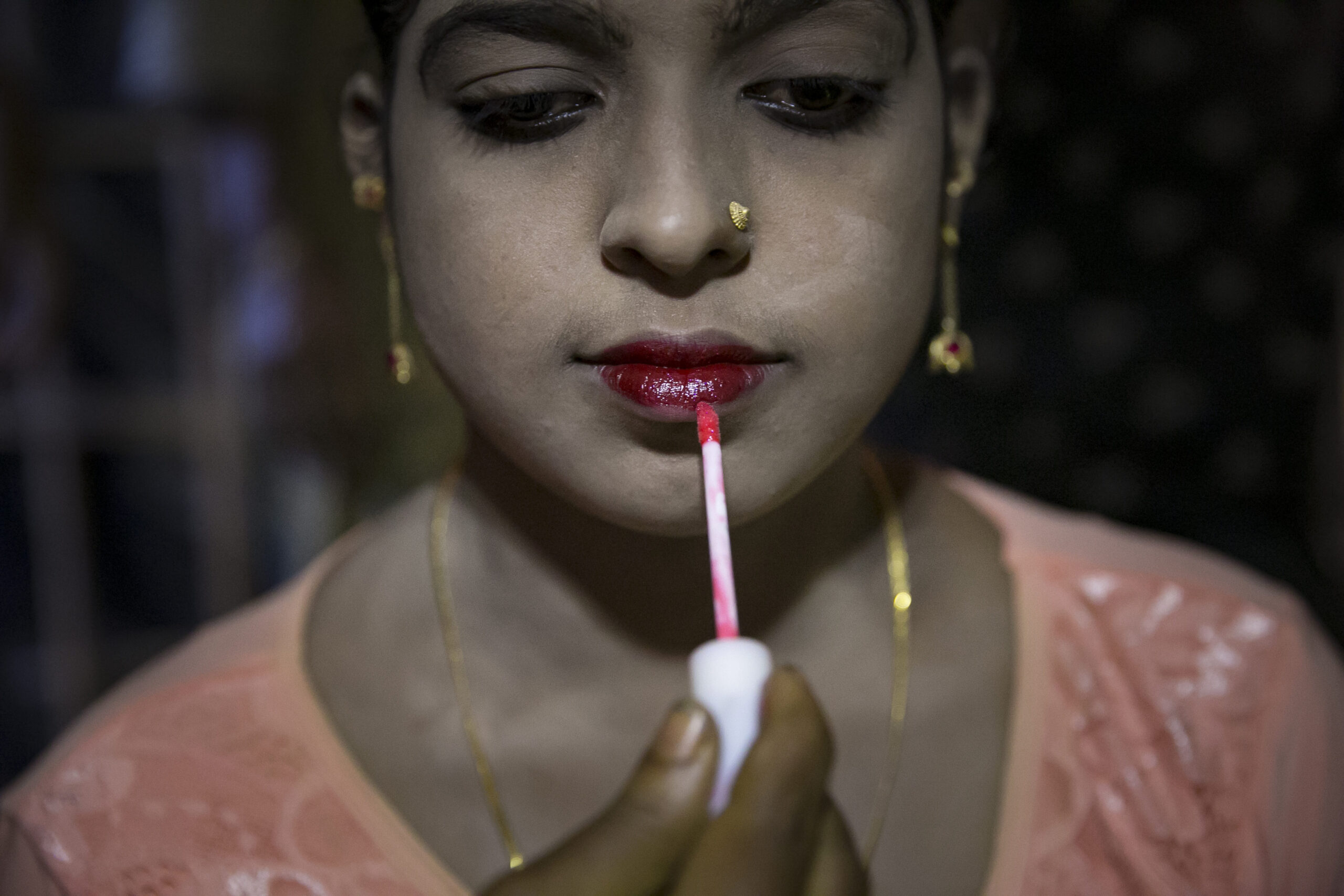 Nur Begum, who doesn't know her age but thinks she is between 14 and 16 years old, has her makeup done on the day of her wedding to Rayeed Alam, 20, in a Bangladesh refugee camp November 30, 2017 in Cox's Bazar, Bangladesh. (Allison Joyce/Getty Images)

Hindutva groups in India have trolled jewelry company Tanishq into withdrawing an advertisement depicting a Hindu woman married into a Muslim family, sparking a debate over censorship and religious sensitivity in the country.

The video shows a baby shower hosted by a Muslim family for their Hindu daughter-in-law.

The advertisement, however, has ruffled feathers of staunch right-wing Hindu groups, who have described it as an example of “love jihad” — a conspiracy theory which claims that Muslim men marry Hindu women solely for the purpose of converting them to Islam.

With #boycotttanishq trending on Twitter on Oct. 13, the company — part of the 152-year-old Tata conglomerate — pulled the ad, though the video is still up on YouTube.

A showroom of the company in the western Indian state of Gujarat received threats after the ad went live last week, and the manager reportedly was asked to write an apology note.

Prime Minister Narendra Modi was the chief minister of Gujarat from 2001 to 2014, and the state is still governed by his Bharatiya Janata Party (BJP).

Vishwa Hindu Parishad, a Hindu organization with close links to the BJP, is among those who have raised objections to the ad.

“The problem is not with love marriage but with the way the ad has been made,” Girish Bharadwaj, a spokesperson for VHP, told Zenger News.

“The commercial shows how a Hindu girl married into a Muslim family is treated well during the baby shower,” he said. “The reality in India, especially in south India, is that after the child is born, the girl is abandoned. That is why we are opposing it.”

Cases of women being abandoned in India by their husbands is not uncommon, but there is little evidence of Muslim men being responsible for it.

The National Investigative Agency, on the direction of the Supreme Court of India, in 2018 investigated 11 interreligious marriages in the southern state of Kerala, after several reports of “love jihad.” The investigation concluded that there was no evidence of forced religious conversion.

Bharadwaj and several others allege that the Tanishq ad was commissioned by the company’s brand manager, Mansoon Khan. After vicious trolling, Khan deleted his social media accounts.

Media experts say that the ad might prove costly for Tanishq’s brand image.

“This commercial was not about the product; it was all about the scenery,” said Ajay Chhabra, a senior marketing expert. “I think a better way could have been to show people of all faiths greeting a couple getting married with an Ekatvam jewelery. That way, nobody’s religious sentiments would have been hurt.”

Chhabra said in India, where religious sentiments are outraged at the slightest provocation, it is essential to keep religion out of campaigns.

This is not the first time that ads have been at the receiving end of brickbats from religious groups.

Surf Excel, a detergent from Hindustan Unilever, was attacked for “hating Hindu sentiments” last year during Holi, the festival of colors, when its ad showed a Hindu girl protecting a Muslim boy from being attacked with colors on his way to a mosque.

Many felt that the ad depicted Hinduism in a bad light and #boycottsurfexcel was trended on social media.

Gautam Shahi, a lawyer specializing in regulatory laws, said that according to advertising regulations in India, advertisers should not depict anything that is likely to promote disharmony or feelings of enmity and hatred between people of different religions.

“Section 19 of the (1995) Act prohibits advertisements that are likely to promote disharmony or feelings of enmity, hatred or ill-will between different religious groups,” he said. “Similarly, Rule 7 of the (1994) Rules states that advertisements should not offend religious susceptibilities of the subscribers or contain references that hurt religious sentiments.”

Ashish Bhasin, CEO of APAC and India chairman of Dentsu Aegis Network, said social media is the biggest platform for real-time feedback for marketers and advertisers.

“In advertising, one cannot always please everyone,” he said. “It is important to take feedback one gets from the consumers and take it forward.

“There is no point in wasting millions of rupees on an advertisement that is working negatively,” he said.