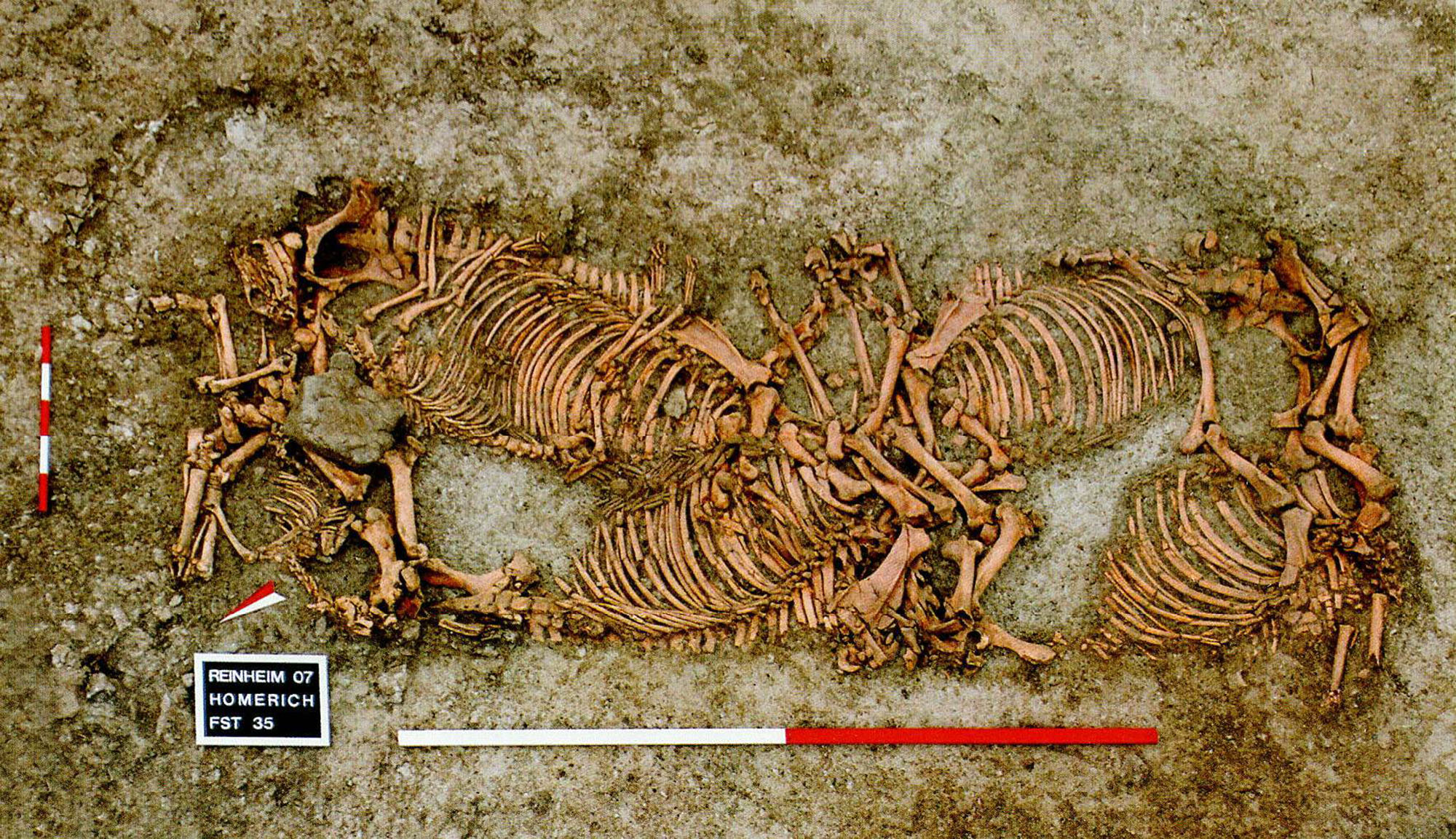 The horse grave as it was in 2007 in an unknown location on an unknown date. (State Monument Office of Saarland/W. Reinhard/Realpress)

A mysterious royal grave featuring the remains of four headless horses and their human master have been put on public display for the first time in Germany.

They were exhibited last weekend at the Saarland Museum for Pre- and Early History in Saarbruecken.

The grave site was first uncovered 13 years ago and the remains — which also included two hunting dogs — have undergone a painstaking restoration by an archeological team in Saarland, Germany.

The horses are part of an elaborate ancient grave site believed to be of a Merovingian prince.

The headless horses are thought to have been part of a hybrid Pagan-Christian burial subsequently raided by medieval grave robbers.

The bones were dug up during excavations at the Homerich site in Reinheim that included a large aristocratic burial mound dating back to the Merovingian Empire of the 7th century.

“The horses were found in 2007 exactly as they are now, repositioned and documented using photogrammetry of the excavation, which made the restoration possible without any loss of friction,” archaeologist Constanze Hopken, of the country’s Regional Office for the Preservation of Monuments, told Zenger News.

The bones were meticulously put back together during a months-long restoration workshop, thanks to the expert assistance of two veterinarians, an animal osteopath and an equestrian.

During the burial ceremony itself, the animals were led one after the other to or into the pit and killed there. “It’s not clear why the horses were beheaded; perhaps the heads were displayed on poles next to the grave to show the richness of the grave,” Hopken said. “But ritual reasons are also possible.”

The grave was raided sometime during the Middle Ages, but archeologists have concluded the horses belonged to a high-profile individual, likely a prince.

“It was a person who was socially very high in society,” Hopken said. “Given the age and condition of the horses and the hunting dogs, one can assume they were well-trained.”

The center of the grave originally contained the body of a man, whose bones have since eroded, along with his armor, sword and shield.

“The Merovingians were Christians, but they gave their dead their possessions from this world to be used in the hereafter, so the dead could lead a similar life there as well,” said Hopken. “One can only expect such a sumptuous gift from a very high-ranking personality who wanted to present himself accordingly in the afterlife.”

The most successful Merovingian leader was Clovis, who ruled from 482 to 511, creating an empire that, despite being divided several times, lasted centuries.