Amy’s Got a Gun: In Senate Hearing, Barrett Tackles Second Amendment and Says She Owns a Firearm 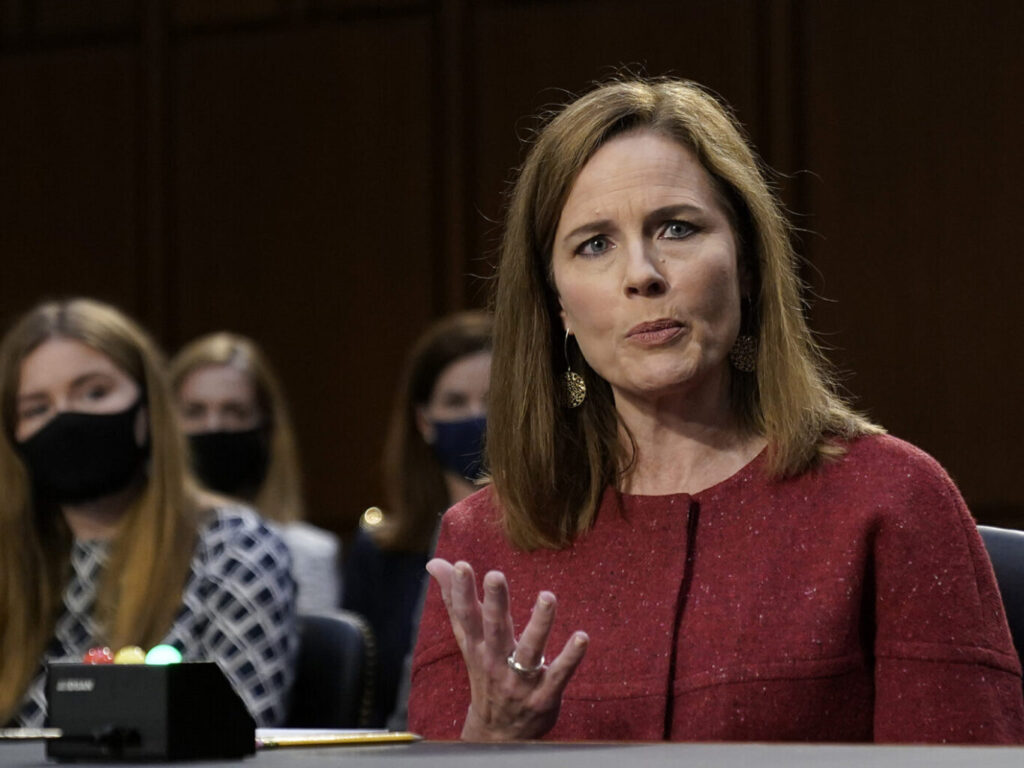 Supreme Court nominee Judge Amy Coney Barrett participated, with her family behind her, in the second day of her Senate Judiciary committee confirmation hearing on Capitol Hill on October 13, 2020 in Washington, DC. Barrett was nominated by President Donald Trump to fill the vacancy left by Justice Ruth Bader Ginsburg who passed away in September. (Drew Angerer/Getty Images)

“We do own a gun,” Barrett said Tuesday of herself and her husband Jesse. She would later defend her minority opinion in a Wisconsin case,  in which she argued nonviolent felons are entitled to own guns under the Second Amendment to the U.S. Constitution.

South Carolina Republican Sen. Lindsey Graham, chairman of the Judiciary Committee, asked whether Barrett would be able to “fairly decide a case even though you own a gun.”

“Judges can’t wake up one day and say ‘I have an agenda,’ ‘I like guns,’ ‘I hate guns,’ ‘I like abortion,’ ‘I hate abortion,’ and walk in like a royal queen and impose their will on the world,” Barrett said. Justices must wait for active legal cases “to wind their way through the process,” she said, referring to cases that can spend years advancing through state courts, federal district courts and federal circuit courts of appeal.

Organizations that advocate for stricter government control of gun ownership in the U.S. said Tuesday that they oppose Barrett’s nomination.

Shannon Watts, founder of Moms Demand Action for Gun Sense in America, said: “Amy Coney Barrett’s alarming interpretation of the Second Amendment would make her an ideal Supreme Court Justice for the NRA [National Rifle Association] but a terrible one for the safety of the American people.”

Connecticut Democratic Sen. Richard Blumenthal said Monday during a day of opening statements that “an activist judge on the bench, doing what Congress could not do, would … strike down common-sense gun safety laws.”

“If your views on the Second Amendment are adopted by the Supreme Court, it would imperil common-sense state laws like Connecticut’s all around the country,” Blumenthal said to Barrett, who wore a mask and remained silent.

Barrett has defenders both inside and outside the Senate.

Robert A. Levy, publisher of the Cato Supreme Court Review, said Tuesday that “Barrett, unlike many of her colleagues on the circuit courts, takes the Second Amendment seriously, using the text, structure, and history of the Constitution to understand and apply the rights protected.”

Second Amendment Foundation founder Alan Gottlieb said Barrett “is eminently qualified to take a seat on the highest court in the nation. Our research shows her to be an outstanding candidate and we hope the U.S. Senate can quickly vote to confirm her.”

The U.S. Supreme Court decides questions involving the constitutionality of law, granting a hearing to only a tiny fraction of the cases it considers. Most are rejected without comment, allowing an appeals court’s rulings to stand. Some are sent back to lower courts with instructions to revisit parts of rulings.

Barrett clerked for the late Justice Antonin Scalia and said Tuesday that she shares his view that the meaning of the Constitution’s language is not meant to evolve. That philosophy is known as “originalism.”

“I interpret the Constitution as a law … I interpret its text as text, and I understand it to have the meaning that it had at the time people ratified it,” Barrett told the Senate panel. “So that meaning doesn’t change over time, and it’s not up to me to update it or infuse my own policy views into it.”

The Second Amendment, written in 1791, reads: “A well regulated Militia, being necessary to the security of a free State, the right of the people to keep and bear Arms, shall not be infringed.”

Barrett was in the minority on a 2019 decision in the Seventh District Court of Appeals in which the other two members of a three-judge panel ruled that a man who served a sentence for a single count of mail fraud in 2004 had forfeited his right to own a gun in Wisconsin because his criminal offense was a felony.

The case, Kanter v. Barr, drew a lengthy dissent from Barrett, who wrote that Second Amendment rights should be denied only to felons who are adjudicated as dangerous.

“I mean, felonies cover a broad range of things,” Barrett said Tuesday, “including selling pigs without a license, in some states, redeeming too many bottle caps in Michigan.”

“Felonies now cover broad swaths of conduct, not all of which seems indicative of whether someone’s likely to abuse a firearm,” she said.

Illinois Democratic Sen. Dick Durbin had questioned her about what he called an epidemic of “people being killed on the streets of Chicago because of the proliferation of deadly firearms.”

Left unmentioned was the 2010 Supreme Court case McDonald v. City of Chicago, in which the justices ruled the individual rights granted by the Second Amendment can be enforced on state and local governments. That case led Chicago to permit firearms ownership—with a permit issued by the city.

City-wide, more than 3,300 people have been shot this year in Chicago, according to a tally kept by the Chicago Tribune.

When he announced his intention to nominate Barrett, President Donald Trump said that “rulings that the Supreme Court will issue in the coming years will decide the survival of our Second Amendment, our religious liberty, our public safety and so much more.”

If Barrett is confirmed, she will be Trump’s third Supreme Court appointment in fewer than four years. The president’s choice of young judges suggests his impact on future court rulings will be felt for decades since federal judges serve lifetime appointments.