Ahmadi Professor Gunned Down in Peshawar

Ahmadiyyas, a minority community declared by law as non-Muslims in Pakistan, face religious persecution and discrimination. 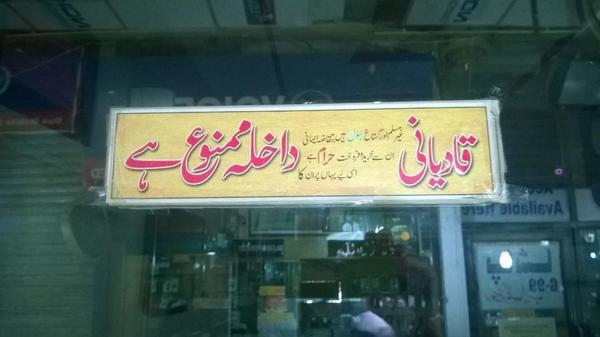 A sticker at a shop in Lahore, Pakistan, from 2019, reads "Ahmadis are not allowed. They are non-Muslims and it is forbidden to do business with them." (Courtesy: Ahmadiyya Press.)

The targeted shooting death of an Ahmadi professor last week is the latest incident in the long history of persecution of the minority community, declared non-Muslims under Pakistani law and denied religious rights.

Following an alleged altercation over religious matters a day earlier, Naeemduddin Khattak, a faculty member at the Government Superior Science College in Peshawar, was shot dead in broad daylight in Peshawar on Oct. 5.

Naeemduddin was killed in his car by two people riding a motorcycle, police said. The suspects stopped the car and fired at Naeemduddin. One suspect has been arrested and another — reportedly a professor at the University of Agriculture in Peshawar — is on the run, police said.

Khattak is the second Ahmadi to be killed in Peshawar in just over two months. In another incident, a mob besieged the residence of an Ahmadi on Sept. 10 over an argument about a public event. The family was rescued and moved to an undisclosed location by police.

Ahmadis are members of the Ahmadiyya community, a religious movement that considers itself to be Muslim and follows the teachings of the Quran. They believe that Ghulam Ahmad — founder of the movement — was a Mahdi, or prophet.

According to the hadith — the collected traditions of the Prophet Muhammad based  —  the Mahdi would appear during the second coming of Jesus Christ and bring justice and equity to the world before the Day of Judgment.

However, this is disputed by Sunni and Shia Muslims, who believe Prophet Muhammad was the last prophet. Many consider Ahmadis to be heretics. There are about 4 million Ahmadis in Pakistan, which has the largest population of Ahmadis in the world.

Saleemuddin, spokesman of the Ahmadiyya community in Pakistan, said Khattak’s death was part of the targeted killings of Ahmadis in Peshawar. Police also said that the initial investigation suggests he was killed because of his religious beliefs.

Human rights activist Farzana Bari, who knew Khattak, said extremism is on the rise in Pakistan and that the Ahmadis are being selectively targeted.

“While we have successfully managed to neutralize the extremists such as Taliban, the state has failed to control religious extremism in the society,” said Bari. “He was a soft-spoken, educated man. Killing an educated man like Khattak shows these extremists want to wipe out the professionals, whether they are the Ahmadis or Shiites.”

Saleemuddin said three Ahmadis have been killed in Pakistan this year.

“Since 1984, 271 Ahmadis have been killed in Pakistan,” he said. “Even after death, the Ahmadis are not at peace. The objections over the burial of the Ahmadis in common graveyards have resulted in 42 bodies been exhumed and re-buried in graveyards specifically allocated for them.”

About 25 places of worship of the Ahmadis have either been set on fire or damaged, while another 29 have been demolished, according to data provided by the community in Pakistan.

Discrimination against the Ahmadiyya community in Pakistan was sanctioned by the state in 1974, when a constitutional amendment adopted by the government of then-prime minister Zulfikar Ali Bhutto declared them non-Muslim. The situation worsened after the government of President Zia-ul-Haq passed Ordinance  XX of 1984 which severely restricted Ahmadis’ religious rights.

The ordinance prohibits Ahmadis from calling themselves Muslims, either directly or indirectly; referring to their faith as Islam; preaching or propagating their religious beliefs; inviting others to accept the Ahmadiyya teachings; insulting the religious feelings of the Muslims; calling their places of worship “mosques” or “masjid;” and worshipping in non-Ahmadi mosques or public prayer rooms, among other things.

The entire population of Rabwah, the Ahmadiyya headquarters in Pakistan, was charged for preaching their religion in December 1989 and for celebrating with earthen lamps in June 2008.

Over a period of time, public spaces for the community have shrunk.

As the executive and legislative branches of government have failed to ban persecution of the community, anti-Ahmadi sentiment has been emboldened.

The current government of Prime Minister Imran Khan, whose slogan is “Naya Pakistan” (New Pakistan) has failed to protect the community from such sentiments. Though Khan had appointed an Ahmadi, Atif Mian, to his Economic Advisory Council in 2018, the government, under pressure from Muslim groups, forced Mian to step down.

Antagonism against the community has spread to such an extent that a major plaza in Lahore has stickers prominently displayed at almost every shop, reading, “We do not do business with the Ahmadis and the Ahmadis are not allowed to enter.”

Further, Muslims refuse to rent out their houses to Ahmadis, and many local shopkeepers refuse to sell goods to them.

Sandeela Akram is an Ahmadi who had to move with her husband into an expensive house in Islamabad because they could not find a house to rent in the middle or low-income areas of the city for fear of persecution.

“We decided to rent a house in a posh area of Islamabad to avoid being identified as an Ahmadi,” Sandeela said. “People in the middle and low-income areas always try to find the faith of others. Once they know we are Ahmadis, they go for social boycott and sometimes it even becomes a security risk.”

She said they were paying 25,000 rupees ($153) more than they could afford just to have people off their backs.

“A cost we have to pay to live peacefully and practice our faith,” she said.