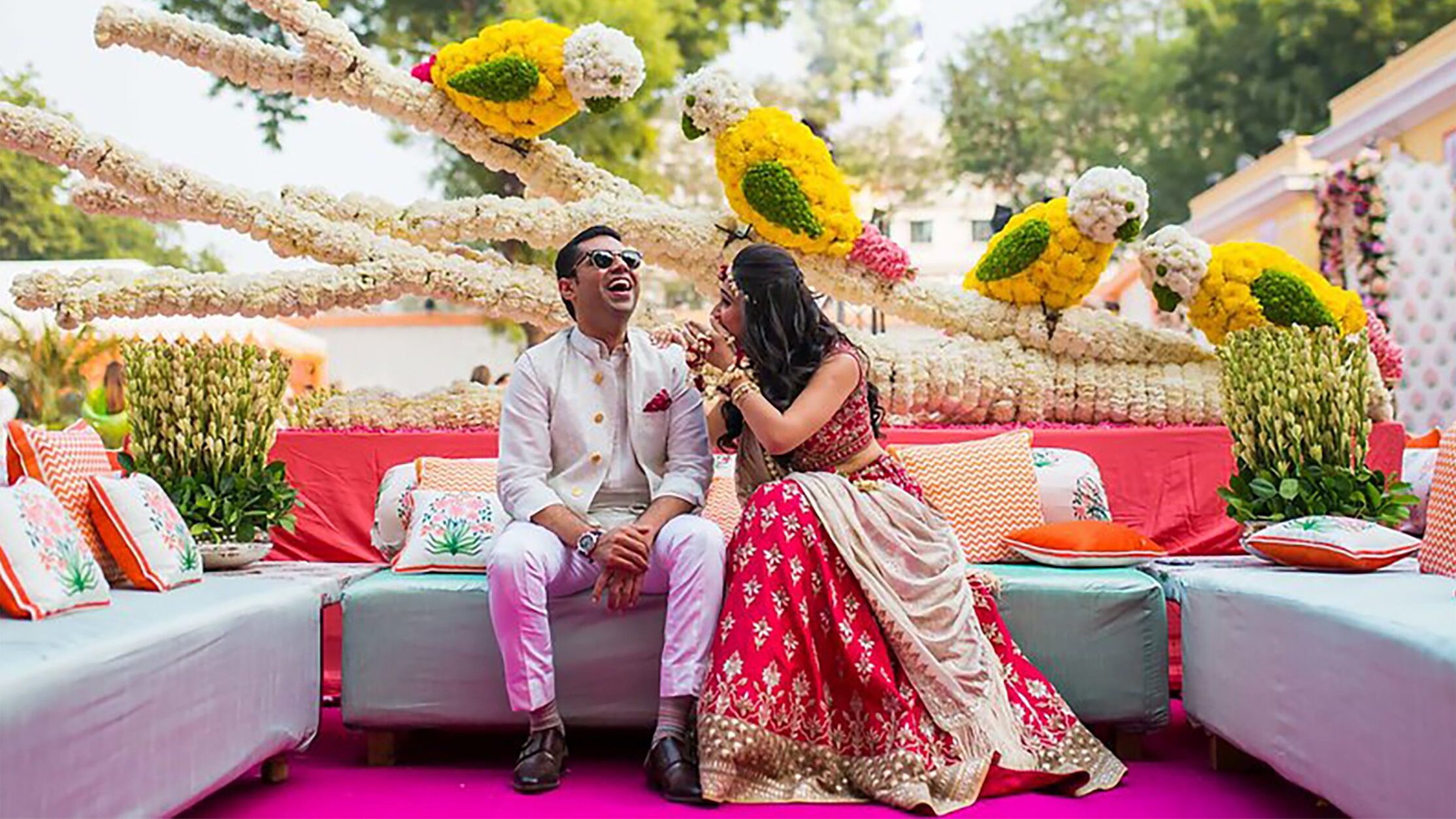 The Indian wedding season is all about grand celebrations. (Courtesy of Amaara Farms)

Certain days of the wedding season are considered “auspicious” for marriages in India. But not for the commuter because that’s when thousands of marriages take place, all on the same day, causing mile-long traffic snarls and chaos. There are horses (the preferred mount of the Indian bridegroom), wedding processions comprising furiously dancing friends and family, and marching brass bands adding to the general melee.

This year, however, the city is unlikely to see such nuptial excesses because, as Vedika Mohan, creative director, The Wedding Design Company said, “there’s hardly a (wedding) season to speak of!”

“A few “micro” weddings are happening but the numbers have come down drastically,” said Mohan. “Earlier there would be at least 600 to 1000 people at a wedding. Now, there are barely 50 to 100.”

When India went into its stringent lockdown in late March, thousands of weddings were abruptly called off or postponed.

Mumbai-based lawyer Zahra Badliwala, who was supposed to get married in July, had to have her wedding postponed to November. The 1000-strong wedding that was to have been spread out over four events at five-star venues has now been whittled down to a 100-guest wedding reception.

“The 100 guests include 50 of mine and 50 of my fiancé’s, so scaled-down is an understatement!” said Badliwala. “But we didn’t think there was any point in waiting further, so we decided to get it over with. We aren’t even going for a honeymoon, given the circumstances.”

With the government putting a cap on the number of guests at 150, with the provision that it may be stretched to 200 under certain conditions after October 15, spending has dropped drastically too.

“The wedding industry has seen business dip by about 70 to 80 percent,” said Mohan.

According to a 2014 KPMG report, India’s wedding industry is valued at $50 billion.  Families tend to save for years to host the grandest celebration they can afford within their budget. Traditionally, and unfairly, the bride’s family is expected to bear much of the burden.

Wealthy Indian families tend to spend up to Rs 12 to 15 lakhs ($16344 to $20431) on precious gold and polki (uncut diamond) bridal jewelry alone, says Deepak Mehra, MD AKM Mehrasons, a jewelry brand 80 percent of whose revenue comes from the bridal market.

And it’s not just jewelry. Nothing comes cheap at the big fat Indian wedding. Wedding outfits expenses can go up from a few lakhs to crores. According to the Matrimony.com survey, 20.22 percent of Indian brides said they were likely to spend more than Rs 1 lakh ($1,353) on wedding clothes. This year, however, some brides have struck lucky with designers bringing down their prices a notch or two.

Designer Shyamal Shodhan of the Indian bridal wear brand Shyamal & Bhumika, that has a store in Los Angeles, says that he readily made “adjustments” when a bride has asked for a discount, or some customization to bring the prices down.

“We have seen a 25 percent dip in our business because our clients, especially those in the US, have not been able to fly down to India to do their trousseau shopping,” says Shodhan. “Even our Indian clients have been wary of visiting the stores. However, our online sales have helped us stay afloat.”

Pankhuri Govil, a Delhi-based graphic designer, who is getting married in February, is trying to make her wedding as close to the real thing as possible. She has a number of wedding functions slated before the main function and is having a two-day destination wedding in Jaipur to boot. However, even then, her family will be spending 50 percent of what they would have in normal circumstances simply because of the reduced number of guests.

“The pre-wedding festivities will be spread out over the next few months, and we are limiting the guest list to the bare minimum,” said Govil. “Many of our relatives will not be able to come from abroad, and some elders will be giving the non-essential festivities a miss for their own safety. In fact, my father who is a marine engineer, will be missing my engagement party.”

Govil’s family has booked the fancy five-star hotel in Jaipur for the wedding ceremony. The majority of guests will be driving down in their own cars to minimize the risk of infection.

“We will also be administering Covid-19 tests to all guests in advance so that everyone stays safe,” said Govil.

Before the pandemic, the average spend per Indian wedding was in the range of Rs 5-10 lakh ($6807 to $13615) at the lower end, up to Rs 5 crores ($680684) for high-end luxury arrangements, said Madan Prasad Bezbaruah, Secretary General, Hotel Association of India (HAI).

This year, however, the revenue loss to the hotel industry is expected to be to the tune of Rs 90000 crores ($12 billion).

But the numbers have begun picking up ever since hotels have reopened across states and Bezbaruah is hopeful of better times around the corner.

“People have become more careful about hygiene and quality of services regardless of the costs involved,” said Bezbaruah. “This is helping the luxury wedding segment. To ensure social distancing, people are booking larger spaces for ceremonies and are ready to spend more in order to have their dream wedding in the safest way possible.”

Some luxury wedding curators like Shivan Gupta of Amaara farms are offering their clients a complete package of venue, decor, food, and entertainment at discounted prices.

“We’ve had to drop our prices by as much as 30 percent because the gathering sizes are so much smaller,” says Gupta. “Earlier, people would have at least six functions before a wedding, but now they’re clubbing together smaller events like the cocktail party and the mehendi ceremony (a wedding tradition in the subcontinent where the bride’s hands and feet are bedecked with intricate henna patterns).”

While the watered-down version of the big fat Indian wedding is not to everybody’s taste, the environment is definitely heaving a sigh of relief. Indian weddings tend to generate a huge amount of waste in the form of discarded food, non-biodegradable decor items, plastic cutlery and crockery and flowers. In 2019, the Rs 200-crore wedding celebrations by a South African tycoon in the ski town of Auli, in the northern state of Uttarakhand, generated an unbelievable 24000 kg (ca. 24 t) of trash!

“Clients have been opting for more sustainable options like simple outdoor decor with Indian flowers instead of exotic blooms that come with a huge carbon footprint,” says Gupta. “There’s an emphasis on hand loom textiles and less food wastage.”

While it’s unlikely that the pandemic will make any lasting changes to the way in which weddings are celebrated in India, the forced frugality may just have shown an alternative, less ostentatious option to conspicuous consumption.