Rare Falcons Worth ‘Hundreds of Thousands’ Seized In Italy

The birds were seized from an Italian citizen trying to smuggle them using false documents.
By Sara Zhivkova October 12, 2020
Facebook
Twitter
Linkedin
Email 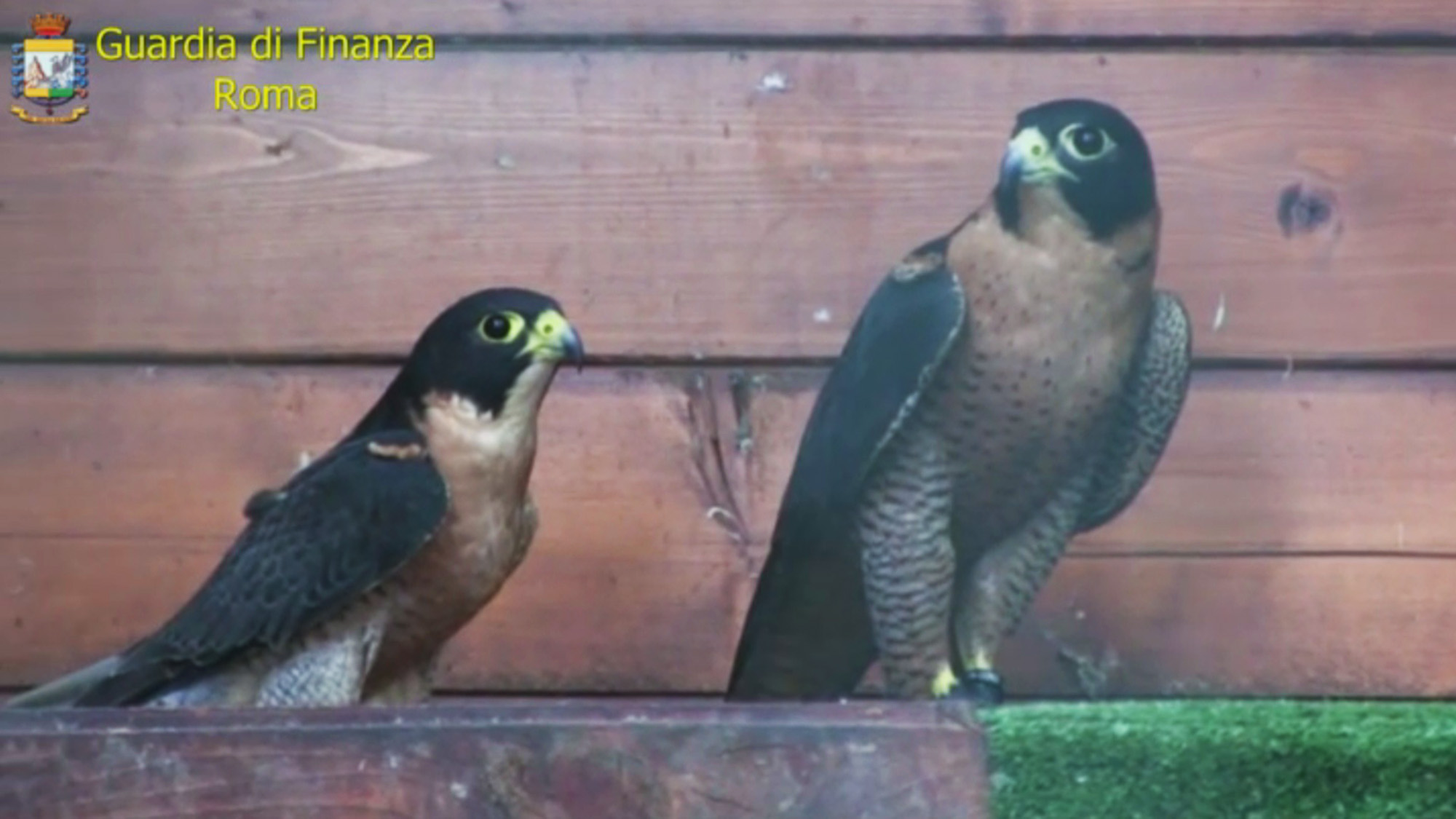 The two rare specimens of birds of the "peregrine falcon" species that were intercepted at the Leonardo da Vinci airport of Fiumicino, Rome, Italy on an unknown date. (Newsflash)

Two rare birds were seized at an Italian airport from a man using false paperwork.

Black shaheen falcons, a subspecies of the peregrine falcon, were taken by authorities at the Leonardo da Vinci-Fiumicino International Airport in Rome, the country’s Guardia di Finanza (Financial Guard) announced on Oct. 6.

The birds were seized from an Italian citizen, as yet named, while he tried to smuggle them into the country by presenting fake documentation.

The suspect, whose flight originated in Dubai, United Arab Emirates, claimed that the animals in his possession were born in Spain under captivity. However, officials noticed the recognition rings used to tag the birds were imitations of those used to identify animals legally bred in Spain, which led to further investigation.

Authorities, with help from the country’s Ministry of the Environment and Land Protection, Ministry of Foreign Affairs and International Cooperation and Spanish law enforcement, discovered the paperwork in the man’s possession belonged to two different birds of a more common subspecies, which were registered as having been born in captivity in Spain.

“There is a niche market of people willing to pay dizzying amounts of money for these very rare species, which cannot be found in Italy,” Guardia di Finanza Police Colonel Stefano Ciotti said.

The pair of 2-year-old falcons, believed to have been taken from their natural habitat, have been moved to a safe place chosen by Italian magistrates, police said. The man responsible for the illegal trafficking was reported to the Public Prosecutor’s Office of Rome for the crimes of forgery and introduction of endangered fauna into Italy.

The black shaheen falcon is a nonmigratory predator that cannot be legally sold in Italy, but could sell for “hundreds of thousands” of dollars on the black market, according to the police report.

The birds of prey, which mostly eat other birds, as well as small mammals, reptiles and insects, are typically around 12 to 18 inches in body length. Females tend to be larger than males.

The use of DDT (Dichloro-diphenyl-trichloroethane) as a pesticide diminished the peregrine falcon population so greatly that the animal was added to the Endangered Species List in the 1970s. Soon after, several countries banned DDT, and the population recovered significantly worldwide. The species was delisted in 1990, but is still federally protected in the United States under the Migratory Bird Treaty Act.