Train services were disrupted, and hospitals ran on generator back-up as power was partly restored in phases within five hours. 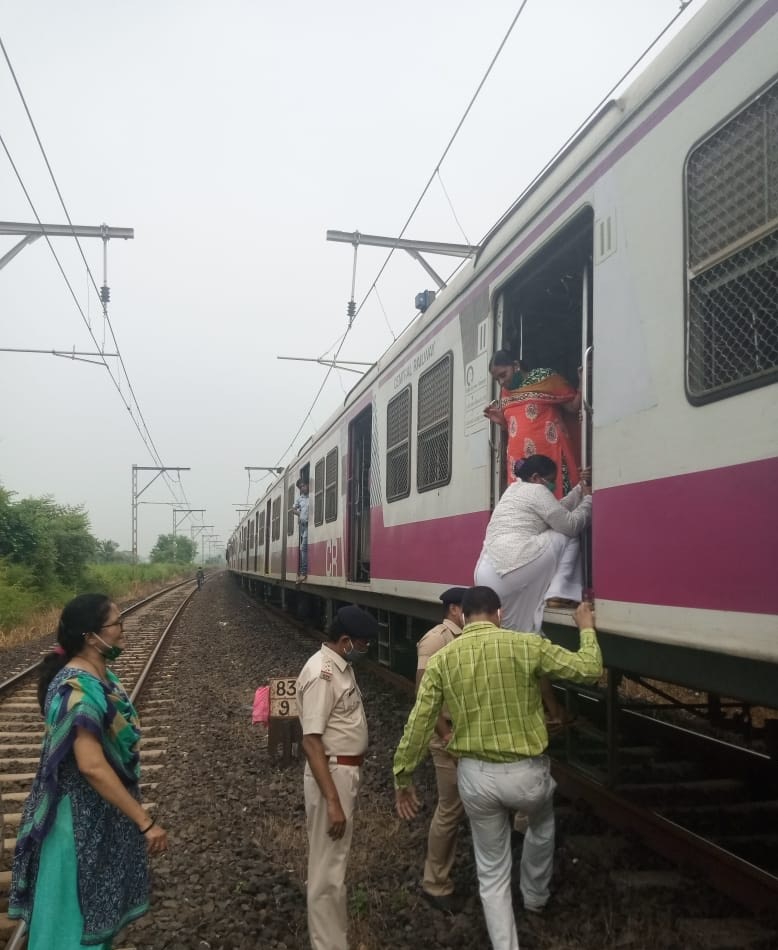 Security personal help commuters to get off trains as services came to a halt due to power outage in Mumbai. (Courtesy: Shivaji Sutar.)

India’s financial capital Mumbai started its Monday morning with panic as the entire city faced a complete electricity outage because of a central grid failure. Power cuts were also reported from various satellite towns of Mumbai such as Thane, Navi Mumbai, Kalyan, and Palghar, among others.

The power cut was reported at around 10 A.M. and electricity was restored in phases over the next five hours. The electric supply, however, remained erratic.

The outage had a cascading effect on internet connection and water supply in many areas.

Maharashtra’s Energy minister Nitin Raut in a social media statement said the electric supply to Mumbai and its suburbs was affected after a sudden circuit failure. “As circuit 1 was under repair, the entire load was on circuit 2, which faced sudden failure resulting in the power cuts,” said Raut.

“The lines and transformers that supply electricity to Mumbai and its suburbs faced multiple tripping,” he added. “Work to restore electricity has been undertaken on a war footing.”

“At 10.10 A.M., there were simultaneous substation tripping in Maharashtra State Electricity Transmission Company’s (MSETCL) unit at Kalwa, Kharghar, causing a huge dip in frequency in the Mumbai transmission system. This led to tripping of Mumbai’s power supply,” said an update from Tata Power, one of the operators in the city.

Another power operator, Adani Electricity, said they faced a grid disturbance because of a fault.

The sudden electricity outage brought the local trains to a halt. The trains have been operating only for essential workers such as medical staff and police officials.

On the Central Railway line, which runs through the city’s eastern suburbs, at least 35 trains came to a halt, some mid-way on the tracks, and some on the stations. “We immediately got in touch with the grid experts to know about the status and mobilized our security personal so the commuters don’t panic,” said Shivaji Sutar, chief public relations officer of the Central Railway.

“The power tripped at around 10.05 A.M.,” he added. “Our engineers, too, began checking for any failures from our side. More than 350 passengers, who wanted to get off the trains, were helped by our security personnel, who accompanied them on the railway tracks.”

On the Western Railway line, which connects the south side of the city to the western suburbs also came to a halt. Their services were restored by 12.20 P.M.

The city’s hospitals and jumbo Covid-19 facilities erected in large open spaces were a concern, as hundreds of patients were on ventilator support. However, no untoward incident was reported, and generator back-up kicked in immediately.

“We have an eight-hour back-up like most other jumbo Covid-19 facilities and the back-up kicked in as soon as the power tripped,” said Dr. Neelam Andrade, who heads a massive Covid-19 field hospital in Goregoan, a western suburb of Mumbai.

The facility, erected in a large exhibition ground, had over 800 patients with Covid-19 admitted in its wards and 45 patients admitted in the Intensive Care Unit on ventilators and other support systems.

“As a precaution, we called for more diesel to ensure the generators kept running if the power outage went on for longer,” said Dr. Andrade.  “Fortunately, the power was restored in phases.”

The city has six such jumbo Covid-19 facilities, where backup of diesel supply was mobilized by the civic body.

Many other city hospitals adopted precautionary measures like halting of elective surgeries momentarily.

“We stopped elective surgeries for some time, due to the uncertainty of restoration of the electric supply,” said Dr. Roy Patankar, director of Zen Multispecialty Hospital in Chembur, an eastern suburb.

“There was no prior intimation from Adani electricity about a power cut,” he added. “The mobile signal also wasn’t too good. Our hospital staff was stuck in the local trains between stations and elective endoscopies and surgeries were delayed or postponed. All ongoing procedures were completed with power back-up.”

The hospitals also faced problems as their internet services crashed and they could not use their applications.

At the JJ Hospital, one of the biggest government-run hospitals in Mumbai, the power outage lasted for four hours. Despite having a back-up of generators, the authorities stocked extra diesel to last them for 24 hours.

Maharashtra’s government has ordered a probe. The Opposition, however, criticized the government.

“The grid failure is a result of ignorance towards the regular repair and maintenance work,” said Opposition leader Kirit Somaiya.