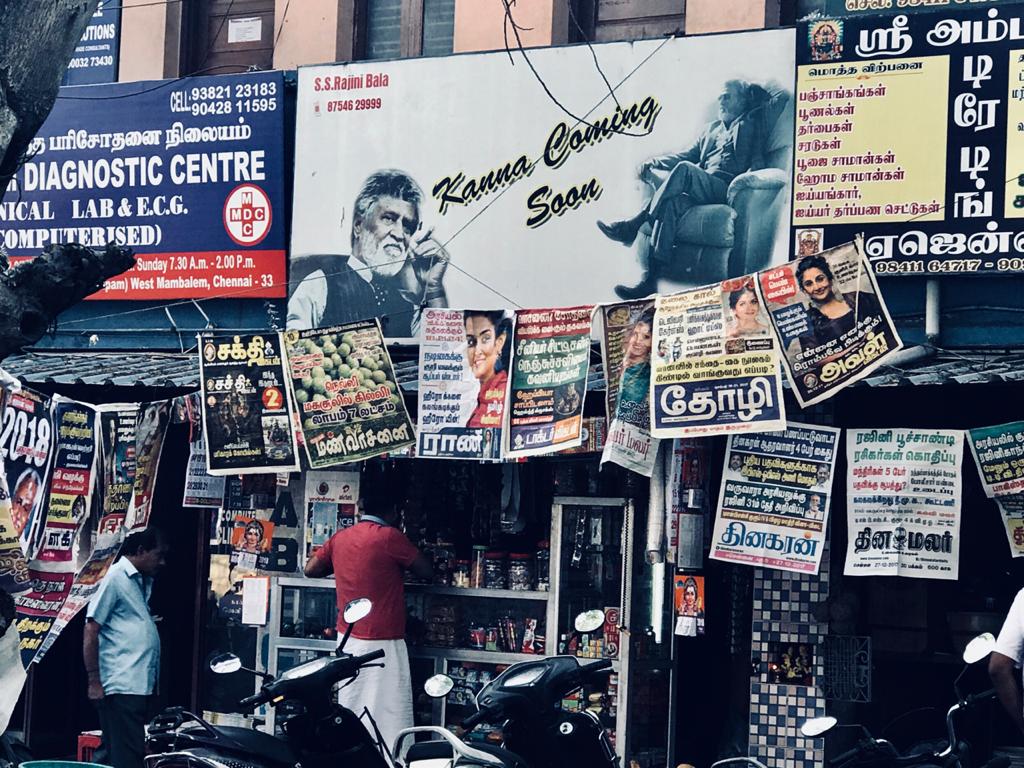 A picture of Tamil superstar Rajinikanth at a shop in Tamil Nadu on an unknown date. (Courtesy: Hariharan Iyer.)

Bussa Krishna Raju, a farmer in the southern Indian state of Telengana, worshipped Donald Trump and had installed a 6-foot statue of the American president at his home.

When news of Trump’s positive test for coronavirus surfaced, Raju went on a fast and prayed fervently for his recovery. While the president recovered, Raju died of cardiac arrest on Oct. 11.

Raju was a mini-celebrity himself, with more than 2,000 followers on Instagram and Facebook, including many from the United States. In a recent video, he says he has been praying to Trump for the past four years. In another video, he is holding the president’s picture and crying.

In India, fans like Raju often go to extreme measures to gain the attention of celebrities. Film actors and politicians are often the objects of such “worship.”

Rajinikanth, one of South India’s most sought-after actors who is now making a foray into politics, has fans willing to die for him.

“We believe in the ideology of Thalaivaa — we think praying for his well-being is one of the many things we can do,” said Manikandan M., a member of the Rajinikanth fan club in Salem, a city in Tamil Nadu.

The fan club claims there are 200,000 fans in the Salem district alone. Thalaivaa, which means “boss” or “leader” in Tamil, is what Rajinikanth fans call him.

“Rajini is our demi-god,” Manikandan said, adding that some of his fellow fans have shaved their heads and are ready to walk on burning coals for the actor’s well-being.

“He does not want us to do these things, nor do our families approve, but we do it because we feel strongly,” he said. Manikandan often takes days off work or goes without pay to organize fasts and prayers for Rajinikanth.

In 2011, when the actor needed a kidney transplant, one of his many fans tried to commit suicide so that he could donate his organ. Another killed himself when he could not get a ticket to Rajinikanth-starrer Kabali in 2016.

The phenomenon of obsessive fandom is not new.

When M.G. Ramachandran, a matinee idol and former chief minister of Tamil Nadu, died on Dec 24, 1987, 30 of his fans also reportedly committed suicide.

“Social media does have a role to play in this as people tend to get into the intricacies of the lives of celebrities,” she said.

Rajesh Sagar, professor of psychiatry at All India Institute of Medical Sciences, said people act like their favorite stars or fast as a coping mechanism.

“People want to escape reality,” said Sagar. “This is usually a sort of bipolar disorder. That is when some patients are given medicines.”

Batra said that people relate their favorite celebrities to gods.

Temples have been built in the names of many politicians and other public figures, from Sonia Gandhi, president of the Indian National Congress, to Prime Minister Narendra Modi.

Batra told Zenger News about a patient who thought of her favorite celebrity as an idol.

“In one case, the patient was clear that the celebrity was her role model and her goddess,” she said. “Everything she did had to be in connection with the celebrity, so much so that she would even work out at the same time as the celebrity and try to get details of the celebrity’s workout plan. The treatment for this is to bring the patient back to reality.”

Batra said celebrity worship can be of three degrees.

“A low-level of celebrity worship could be just for entertainment and that is just a form of extroverted behavior,” she said. “The medium level could represent some degree of neuroticism that is anxiety, depression, low self-esteem or boredom. Very high level or a pathological nature of worship expresses fantasy, delusions and traits of psychoticism.”

She said these are signs of serious psychological distress.