The road on the Pakistan-Afghanistan border is not only picturesque, but also full of historical significance. 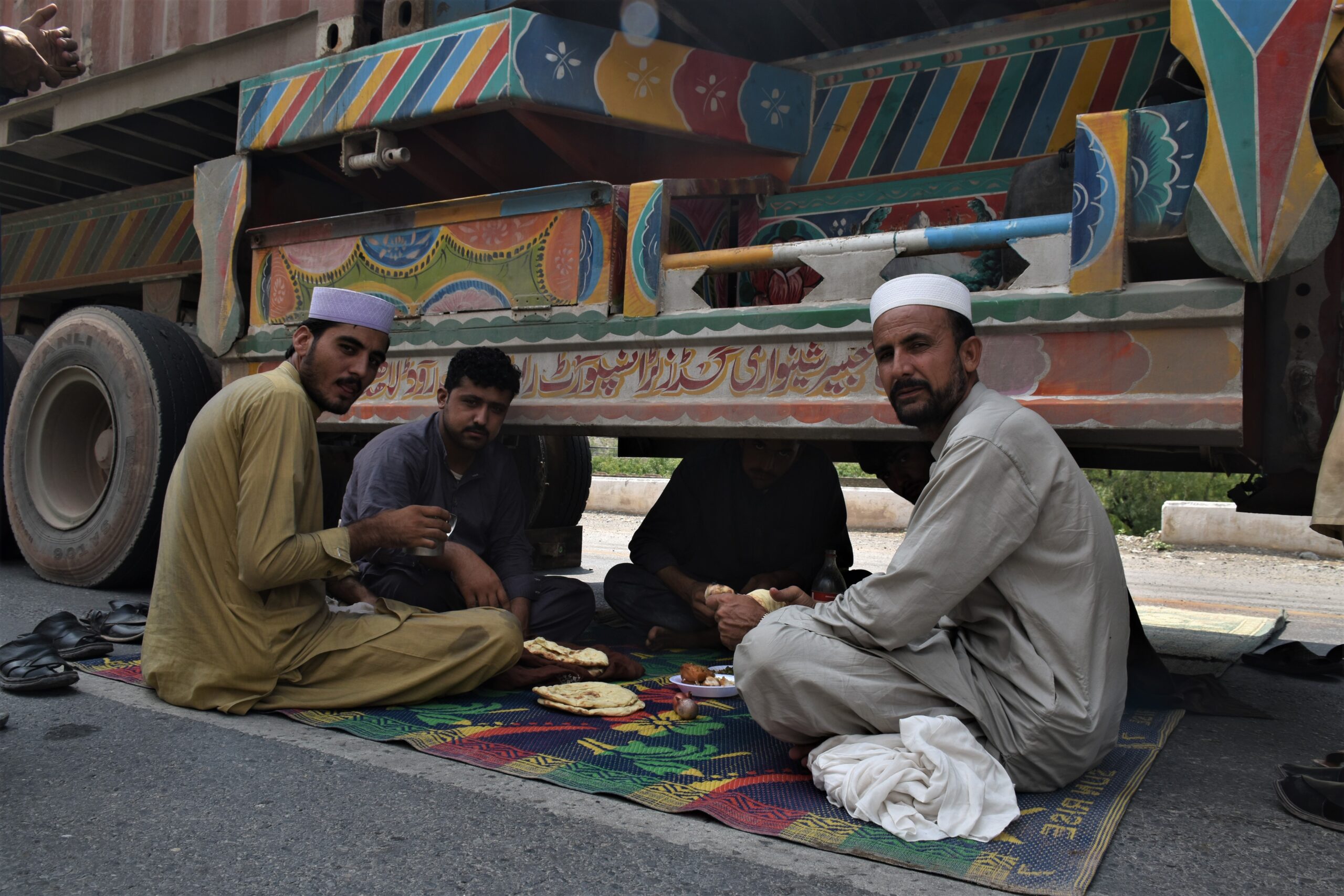 A group of truck drivers take a break on the road to Torkham. Photo: S Hassan

It was 2013 when my friends and I first went to Karkhano Market on the outskirts of Peshawar, bordering the then-tribal area of Khyber Agency.

A sign with the warning “You are about to enter Khyber Agency,” was visibly placed. Two out of three of us were from Islamabad, while the third was from Peshawar.

We crossed the border of the settled zone and stepped into the tribal area. Shops on both sides of the road had old-style scales in their glass windows. We turned to our Peshawari friend seeking some answers, and he said, “The shops sell charas (cannabis resin), and they sell it by the kilo. Welcome to the tribal area.”

We were advised by our local friend to turn the car around because even a blind man could tell that two of us were tourists!

Fast forward seven years and the three of us went to Khyber Agency again, after its merger with Khyber Pakhtunkhwa and now called District Khyber. This time our destination was not Karkhano Market but the Pak-Afghan border at Torkham, traveling the route used by invaders from Alexander the Great to the Mughals and the Afghans. And, more recently, Khyber Rifles forces surrounded by the Taliban.

There cannot be more history associated with one mountain pass than the Khyber Pass — a place of tall mountains, deep, narrow gorges, and forts where battles were won and lost.

As we crossed into the Khyber District, the shops that once had scales in their windows had been replaced by restaurants and shops selling other items. We were still behaving like tourists, but the difference was that we were not the only tourists.

After traveling a little distance, we reached the iconic Khyber gate, a monument at the entrance to the Khyber Pass, the gateway to the erstwhile Khyber Agency. The Khyber gate, which is pictured on the 10-rupee note, is quite a disappointment as it is not as majestic as seen in photos.

Traveling on the paved road, abandoned checkpoints were visible in the mountains. At the height of the fighting in the early to mid-2000s, traveling on this road was full of danger. This was the route used by the United States and allied forces to transfer military equipment, food, fuel, and other vital provisions to Western forces in Afghanistan.

The Pakistani Taliban, who focused on choking off the supply route, destroyed and looted the containers. The supplies for the Western allied forces in Afghanistan were trucked hundreds of miles from the port at Karachi across Pakistan to Peshawar, and then on to Afghanistan through the Khyber Pass.

Looted items from these containers made their way to the Karkhano Market, where people, including myself, thronged to purchase “NATO stuff. ” One could easily buy ready-to-eat food, biscuits, energy drinks, foldable military beds, military boots and even medals.

In October 2014, Pakistan launched a massive military operation in Khyber Agency against the Taliban in phases. These operations were code-named Khyber I, II, III and IV. The military finally cleared the area in August 2017.

Traveling on the road, we soon reached the Shagai Fort that was built in 1927 by British forces to oversee the Khyber Pass. It is now manned by Pakistani military and paramilitary troops, and it serves as headquarters for the Khyber Rifles, the traditional guardians of the Khyber Pass.

The Khyber Railways track was planned by the British in the late 19th century. The 52 kilometer (32 mile) track was completed in 1925 and has about 34 tunnels and 92 bridges. It runs from Peshawar to Landi Khana at Torkham. The track was later used for the Khyber Steam Safari; the last steam engine chugged out in 2006 before the track was destroyed at places by torrential rains.

Driving further, one finds the Ali Masjid (mosque) and the Ali Masjid fort at the point where the gorge is the narrowest. Whoever controlled the heights in the Ali Masjid area would have a strategic benefit. The fort was constructed in 1837 by Afghan ruler Dost Muhammad Khan and witnessed intense battles between the British and tribal fighters in the first Afghan war in 1842 and the second Afghan war in 1879.

About two hours after the start of our journey, we entered Landi Kotal, the administrative capital of Khyber District. It is at the western edge of the Khyber Pass that marks the entrance to the Nangarhar Province of Afghanistan, which is just 5 km to the west.

At the entrance was a second-century Buddhist stupa next to the road. This ruined stupa features a dome resting upon a three-tiered base. The Sphola stupa may have been constructed toward the end of the Kushan Empire or soon after (third to the fifth century A.D.). It is the best-preserved Buddhist monument in the Khyber Pass.

Also, there is a mountain wall embellished with colorful commemorative tablets of British regiments stationed in this territory since 1857. Dating to 1878, Khyber Rifles is one of the most decorated of the Frontier Corps due to its strategic location and a role spanning over a century and a half. Its first commandant was Sir Robert Warburton, son of an Anglo-Irish Lt. Col. Robert Warburton of the Bengal Artillery.

I was excited to see Landi Kotal, one of the largest towns in the area, as I have heard so many stories from my parents about buying clothes, radio transistors and clothes irons at cheap prices — and how difficult it was to bring items back to Peshawar. But now, its bazaar has only a few shops.

Further along the road, not far from the Torkham border, we saw container-laden trucks lined up on the side of the road. Some drivers were lying in the shade of their trucks and some were sitting with other drivers. We stopped to talk to them.

Meeran Gul, in his 40s, was sitting in the shade of his truck with others and getting ready to have lunch. He looked tired but greeted us with a smile. He said the border was 10 km (6 miles) away, but that it would take him another five to six days to reach there.

“The distance that you covered in an hour and a half has taken us six days, and we will have to wait for another six days,” said Gul. “The clearance at Torkham is slow and that is making our lives miserable.”

But one man’s misery is another man’s opportunity. On a small run-down vehicle was Inayat Khan, sitting cross-legged. He had a small gas cylinder on one side and mounted on the bricks was a cooking pot.

“I am running a mobile hotel,” said Khan. “I sell home-cooked food and cold water for these drivers. It is an opportunity for me to make money from their plight. But I do not overcharge. My prices are on par with other roadside hotels.”

Further down the road, we came to the historic 1925 Michni post with a view of the Torkham border.

Between Michni post and Torkham border lies the infamous dungeon of King Tamerlane. Tamerlane had an ingenious way of punishing his opponents. He had developed a vertical tunnel fixed with sharp blades. He would throw his opponents in at the top end and one can imagine how they came out at the lower end. The daunting dungeon still stands.

A few miles away is the Torkham border, a bustling trading town with people and trucks crossing into Afghanistan and coming back. After Torkham, the valley opens up into plains, and Jalalabad is only about an hour’s drive away.