Books and magazines are available for passengers on the line that runs through the city’s iconic book district. 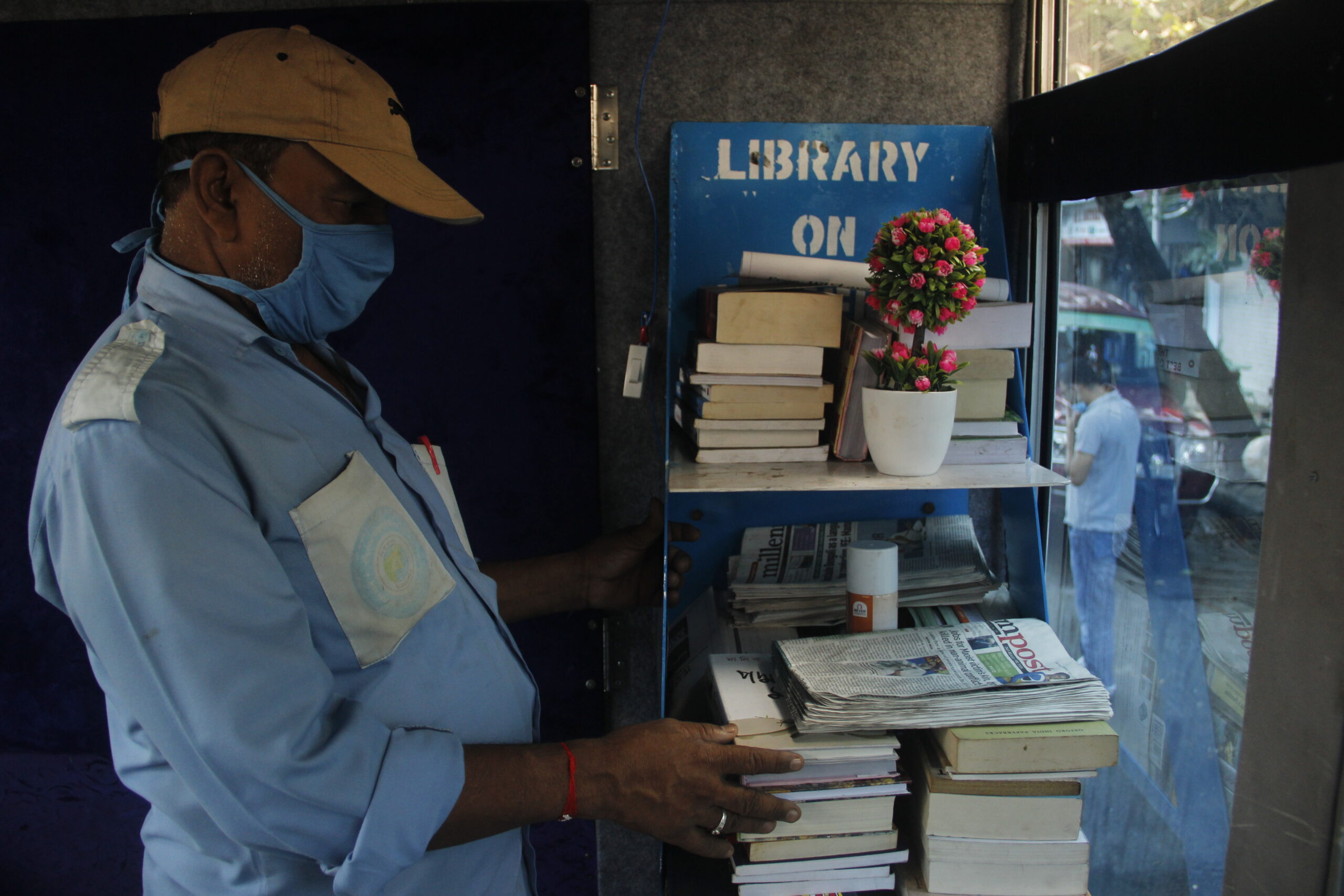 A librarian at the tram library in Kolkata on Oct. 9. (Courtesy: Saptak Datta.)

Read and travel —that’s the fitting slogan for a Kolkata tram outfitted with books and magazines that runs through the city’s iconic College Street book district, which is also home to Calcutta University, Presidency University, Scottish Church College and Calcutta Medical College and Hospital.

The mobile library on the 4.5 kilometer (2.8 mile) route between Esplanade and Shyambazar — one of the oldest tram routes in the city — is the first of its kind in India. It was launched in late September by the West Bengal Transport Corp.

“It is a very good initiative,” said Kalyan Das, a professor in the Department of English at Presidency University. “There are many students who cannot afford civil service examination books. They will benefit from this service. Even now, there is a certain percentage of people in the city who like reading actual books over digital books.

“Since trams are part of the city’s heritage, therefore, many people will like the concept and make use of the ‘library on wheels.’ These days, people are always in a hurry and do not read enough books, so this is a good, symbolic move to bring back old habits,” he said.

The history of trams in Kolkata dates to 1873, when the first tram was horse-driven and covered 2.4 miles between Sealdah and Armenian Ghat. The Calcutta Tramway Co. was formed and registered in London in 1880, and the electrification of trams began in 1900. Now, 120 years later, this mode of passenger transport is a matter of pride for the City of Joy (a name coined by French author Dominique Lapierre in the title of his novel).

Sourav Chattopadhyay, an author from the city and a daily passenger to College Street, believes that the initiative will encourage the habit of reading books, and that there is no conflict between the tram library and a stand-alone library.

“When we talk of the city and its popular culture, we hardly show any curiosity about what the city reads today,” said Chattopadhyay. “With visual entertainment taking center stage, anything that encourages a habit of reading is welcome.

“This mobile library focuses on, as the catch-line says, ‘read and travel.’ This makes the initiative very unique,” he said.

The library will have books and magazines, including those on competitive examinations such as the civil services, GRE and GMAT, in order to attract readers from educational institutions along the route.

While Das believes that this move will not cause a sudden, radical change in reading habits or increase the number of book readers in the city, there may be a change in the consumption of physical books.

“I think the readership will increase in College Street as there are lots of students who commute by tram to travel short distances across those areas,” said Das. “There is a thing called visual orientation, so when they get up on one of these trams, they will most probably grab a book and start reading it.”

Swapan Chakravorty, former head librarian at the National Library, is not convinced about the idea of a library inside a tram and says it is just a gimmick to run the trams and continue with a mode of pollution-free transport.

“If someone is really interested in reading a book, he will not wait on the streets for a particular tram; he will go to a library,” Chakravorty said, though he acknowledges that there has been a change in reading habits.

“People have stopped going to the libraries now that they have access to digital books. And, not surprisingly, libraries are shutting down. Earlier, we would have libraries on wheels for places where there were none, such as the rural parts of our country. I doubt whether students and other book lovers will benefit from this tram library.”

Das draws a parallel between riding a tram and the habit of reading a book — both are slow and steady, and both need patience to complete.

“The rhythm of the tram wheels captures the rhythm of the city,” said Chattopadhyay. “Kolkata has been the center of reading and writing for centuries. The very route the tram will take embodies this history.”

Only 148 trams are now in operation in Kolkata; many others have been taken off service by the state government. Similarly, while bigger libraries like the National Library, British Council Library and the American Library are still operational, several smaller libraries have closed.

“Many of the libraries have been shut down completely because of low staff,” said Arka Deb, a senior broadcast journalist. “There are instances where a library has been closed because there were too few readers. People now have their libraries in their smartphones.”

Whether the new service aboard the tram line encourages more book readers is yet to be seen, but professor Das said, “It’s about sending out a positive message to the young people of the city and to the people who love reading and traveling at the same time.”

The tram also has free Wi-Fi for those who prefer reading e-books.