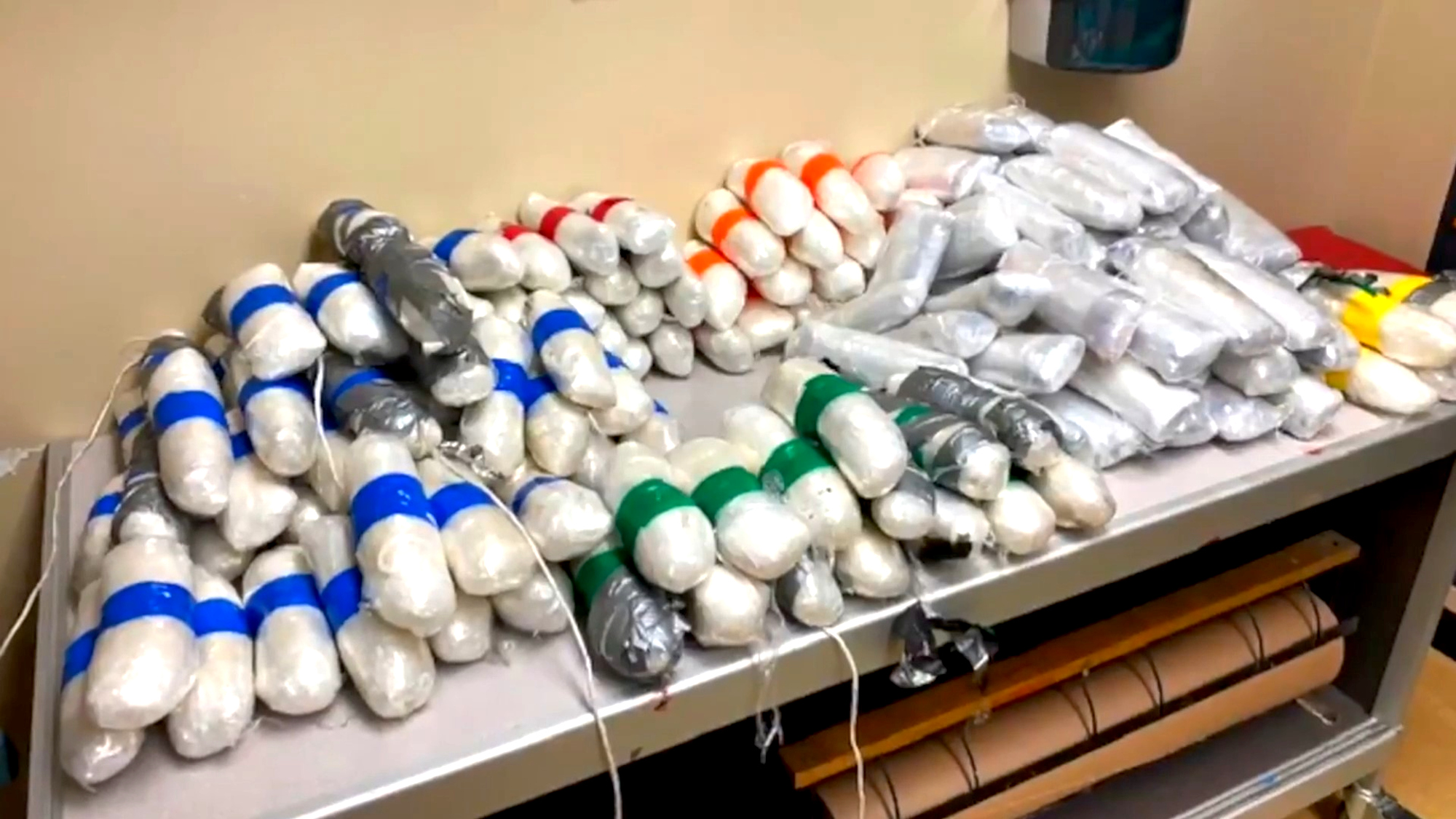 54,840 fentanyl pills, roughly 125 pounds of heroin and just over 100 pounds of meth estimated to be worth a total of nearly $1.8 million laid out on a table. (Pinal County Sheriff/Newsflash)

A traffic stop on an Arizona interstate turned into one of the biggest drug busts by law enforcement in that southwest U.S. state in years.

A K-9 unit with the Pinal County Sheriff’s Office stopped an SUV traveling west on Interstate 10 in Casa Grande at about 1 p.m. on Oct. 1, the department announced Tuesday.

The driver, who was identified as Rogelio Bustamante, had a warrant out for his arrest and was driving on a suspended license. After finding inconsistencies with Bustamante’s story, deputies had sufficient evidence to investigate further and performed a search of the vehicle, during which they discovered a massive stockpile of illegal drugs stashed in dozens of bundles throughout the car.

Authorities processed and seized 166 packages from the SUV containing 54,840 fentanyl pills, roughly 125 pounds of heroin and just over 100 pounds of meth estimated to be worth a total of nearly $1.8 million.

“These drugs represent a clear and continuing battle against the cartels and against drug addiction,” Sheriff Mark Lamb said. “Without a doubt, lives were saved by stopping these drugs from being scattered across our communities.”

Bustamante was arrested and booked on multiple drug-related charges. It is unclear whether he is still being held in custody or if he has since been released on bail.

The deputies who conducted the bust were working in partnership with U.S. Border Patrol as part of Operation Stonegarden, a program aimed at increasing cooperation and coordination among local, tribal, territorial, state and federal law enforcement agencies. The program funds joint efforts to secure the country’s borders, including territories with international water borders, through grants provided by the Federal Emergency Management Agency, housed under the Department of Homeland Security.

Critics have expressed concern that it undermines trust between law enforcement and immigrant communities and have also noted that it lacks oversight, according to the National Immigrant Forum. The DHS Inspector General additionally found in 2017 that FEMA and Customs and Border Protection failed to properly conduct oversight over program grantees or to provide them with adequate guidance.

Operation Stonegarden has allotted up to $90 million in funding for the 2020 fiscal year. The same amount was appropriated in 2019, during which 70% of the funds went to states along the border with Mexico.