Bones and teeth of leopards are sold for medicines and human consumption. 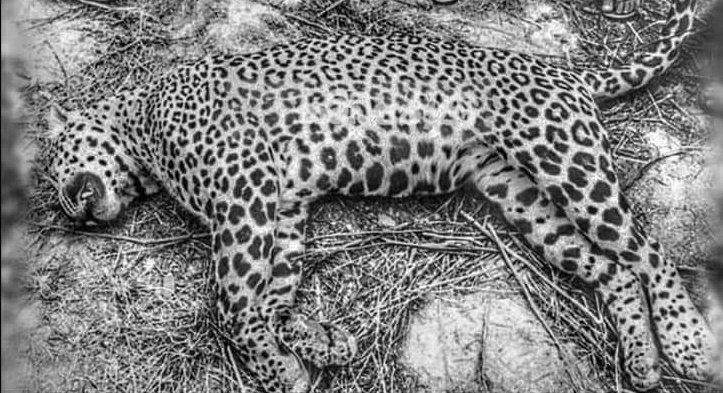 Amid rising numbers of poaching in Sri Lanka, three people in the country were arrested on Sep 25 for allegedly trapping and killing a leopard and trying to sell the meat as a cure for asthma.

The Sri Lankan leopard (Panthera pardus kotiya) is listed as “vulnerable” on the IUCN Red List of Threatened Species. As of October 2019, the mature leopard population in Sri Lanka was 777.  In the past 10 years, 42 leopards have been killed. A rare black panther was killed in May this year.

Wildlife poaching is illegal in Sri Lanka, and the use of snares to kill or trap mammals is an offense that carries a fine of 30,000-100,000 rupees ($163-$543), or 2-5 years imprisonment, or both, according to the country’s  Flora and Fauna Protection Ordinance.

Exceptions are made for the use of snares to target “pest species” such as wild boar. Last month, residents of Brownlow Estate in Nuwara Eliya in central Sri Lanka, found a dead leopard with three gunshots to its head. The slugs were recovered during an autopsy.

Wildlife activists and nongovernmental organizations say that most leopard poaching is for harvesting and selling body parts.

“We do not know whether the snares have been really set for other animals or only leopards,” said Ravi Perera, founder of Serendipity Wildlife Foundation.

Increasingly, however, leopards have been the victims of these traps, according to the Wilderness and Wildlife Conservatiion Trust (WTTC).

It is well documented that leopards are poached for their skins, meat and bones, which are sold for profit both inside and outside of the country.

“The Asian countries — China and Vietnam — use the teeth of the leopards for witchcraft,” said Perera. Leopards and other big cats are sought after in Chinese and Vietnamese cultures because of their significance. While the Chinese use parts of the leopard and other alpha cats for therapeutic healing, it is consumed in both Vietnam and China. Its consumption is believed to make a person strong, help maintain good physical health, and is an expression of a person’s wealth.

China is the biggest investor in Sri Lanka and a huge Chinese workforce is either employed or owns stores in the island nation. Leopocon, a nonprofit for the conservation of Sri Lankan leopards, has been investigating whether there is any link between the Chinese population and leopard poaching, said Sethil Muhadiram, the organization’s founder.

“The snares are being deliberately laid in the paths the leopards frequent,” Muhadiram said. He said leopard teeth are used for making jewelry.

Perera said his organization is trying to find a foreign link to these killings through the Tactical Universal Surveillance Knowledge-based System, with the help of retired military experts in electronic warfare. “This is a $15-billion business, and we are trying to track the source of the crime,” he said.

He said they have identified such a link to a type of meat being sold in Southeast Asian countries from Sri Lanka. However, he did not disclose the nature of the meat, fearing it might jeopardize the investigations.

The organizations he works with say that leopard bones are boiled to make a broth to cure certain illnesses.

“The right foot of the leopard, with its claws, costs around $1,000. The villagers can easily make a lot of money by trapping the animal and selling off its feet alone,” Perera said. In some cases, he said, the whole skin of a leopard has been found intact, which could fetch over $1,000.

“There was an incident of a leopard being shot. Somebody alerted the Department of Wildlife Conservation before the body was cleared. Once the DWC takes the body, there was nothing the poachers could do. But, it does not have enough manpower,” he said.

Perera said that a number of incidents go unreported and that his organization is using artificial intelligence, biometrics and open-source intelligence to zero in on suspects.

“We have a database of facial recognition software and a separate set of databases of human fingerprints that have been involved in wildlife crimes. We are trying to investigate wildlife crime using touch DNA,” said Perera. “We got a tip on parts of a leopard being sold less than 24 hours of our application’s launch”

Jagath Gunawardane, an environmental lawyer, said implementing the law is problematic because the area to be surveilled is huge.

“The DWC should train the locals and make use of the estate system, where the estates watch over the incidents of wildlife killings in their designated areas,” Gunawardane said.

The consignments containing wildlife species are smuggled in cargo flights, with the packages purposely mislabeled.

“Sometimes, the passengers take the skin in their luggage, which does not look suspicious in an X-ray machine. In such cases, it goes undetected unless a manual check is done. Performing manual checks is technically impossible,” Perera said.

Perera said though smuggling has been curtailed during the pandemic, foreign nationals from Russia and Europe were caught earlier smuggling flora and fauna out of Sri Lanka.

“In the European market, the exotic species of reptiles are sold as pets. They have a high demand in the European wildlife trade market as well,” Perera said.

«Previous Post
Amid Wave of Protests After Rape, Death of Dalit Woman, Police Arrest Journalist, 3 Others »Next Post
Will Covid-19 Be More Lethal in India in Winter?