More than 6,500 people have died of the disease, health officials report. 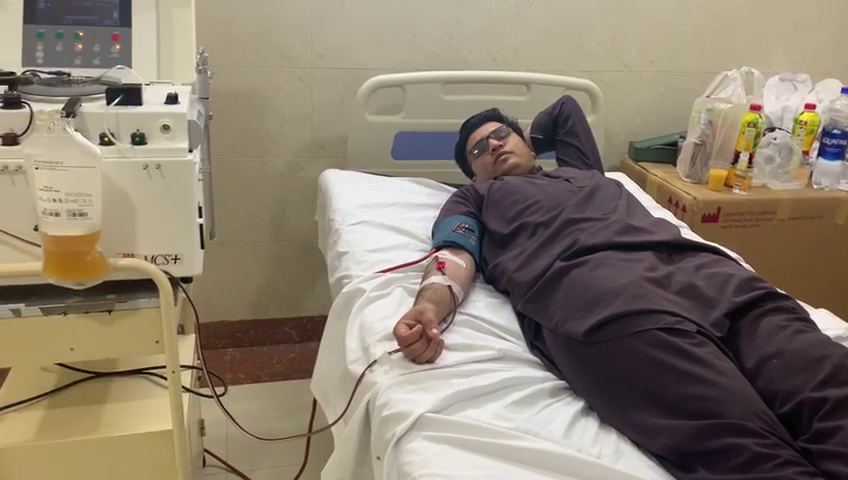 Public appeals from health experts around the world and internet initiatives by activist groups are bringing together sick Pakistanis and willing plasma donors who have survived the coronavirus and might provide. life-saving antibodies.

The catch: the efficacy of this experimental therapy, known as CPT, has not been proven.

Despite this — or perhaps because of it — a black market has sprung up in Pakistan amid its worst public health and economic crises in living memory, to meet soaring demand for plasma to treat hospitalized victims.

According to data from the Pakistan Ministry of Health, the country has nearly 317,000 confirmed cases to date and more than 6,500 deaths from the virus as of Oct. 8. Critics of Prime Minister Imran Khan, including the World Health Organization, slammed him for a lukewarm lockdown strategy from day one of the pandemic. He kept mosques open during Ramadan and allowed markets to reopen toward the end. The result: a spike of cases across the country in June.

The country’s public health-care system could not cope, enabling the plasma black market to mushroom.
It is sold on the black market for as much as $3,600 per or more per unit. Authorities cannot curb the trade. Officials from Pakistan’s National Disaster Management Authority, the main government agency handling COVID-19 affairs, declined to comment on the black market. The cybercrime unit of the country’s Federal Investigation Agency did not respond to press requests.

Pakistani authorities are hamstrung — financial transactions are done in private hospitals or via social media, making it difficult to monitor the size and dollar value of the illegal enterprise. Also, donors can falsely claim to have recovered from Covid-19, praying on the desperate. Even if donors, both legal and illegal, have recovered, they rush to sell to patients’ families, rather than waiting two weeks for their antibody levels to increase, possibly rendering the plasma useless, say doctors.

The Pakistani government spends only 2% of its gross domestic product on health care. In April, Pakistan had among the highest rising number of coronavirus cases and deaths, and largest one-day spike in the world.
“Selling plasma online to make profits is totally ridiculous and unacceptable,” said Dr. Abu Bakr Sheikh, a Pakistani post-graduate trainee in the Department of Internal Medicine at the University of New Mexico Health Sciences Center.

“Having social media groups to connect recipients with donors is great if they do it for free. There is not sufficient data to support that plasma therapy is effective,” said Sheikh.

Corona Recovered Warriors, an activist group in Pakistan, is using its Facebook page to connect numerous Covid-19 patients with plasma donors who have recovered from the virus.

The group has 331,943 members, according to its site, and provides resources for Covid-19 victims to find donors, information for potential donors and access to free medical supplies.

Corona Recovered Warriors does not track whether the CPT treatments it facilitates via donors improved patients’ conditions. The group does keep track of whether potential donors demand money from patients for plasma donations.

“As per my portal, there are more than 560 registered donors, out of which three have asked for money from those seeking plasma therapy. They were reported to the government,” said musician Zoraiz Riaz, the group’s founder.

The jury remains out on whether donated plasma makes a difference.

“As many as 450 patients have been connected with donors through Corona Recovered Warriors, but it’s not clear which benefited from the therapy,” Riaz said. “I have heard of three cases up until now of people who didn’t survive even after the plasma therapy because they were already on ventilators.”

Yet there have been some rays of light.

Riaz contends the focus should not be the black market, but on those who spend their own money to travel hundreds of miles to help someone they don’t know. If nature has been kind to those who recovered, they should help those who are struggling to breathe.”

Aizaz Shamshad, a coronavirus survivor who lives in the northwest city of Peshawar, has been proactive in helping Covid-19 patients, twice donating plasma at a local medical center.

The first recipient was critically ill and died a few days after receiving the transfusion. A second recipient eventually recovered.

“I understand there are doubts about this therapy, but as a patient one tries to use all options in a dire situation,” said Shamshad, “and it gives hope to those patients who run out of all other options.”