The girlfriend of deceased actor Sushant Singh Rajput faces a storm of media speculation in the case. 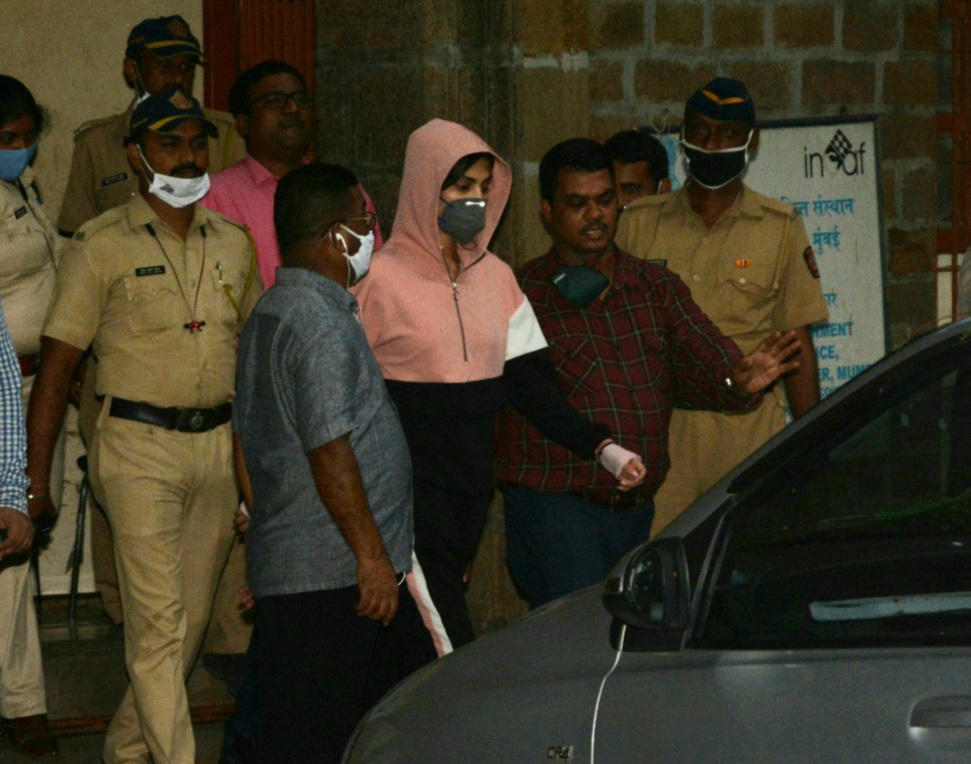 Rhea Chakraborty at the NCB office in Mumbai on an unknown date. (Courtesy: Deepak Salvi.)

After spending almost a month in jail on drug charges, Bollywood actor Rhea Chakraborty, the girlfriend of deceased actor Sushant Singh Rajput, has been granted bail by the Bombay High Court.

The actor, who was arrested Sept. 8 on alleged drug offenses related to Rajput’s death, drove out of Mumbai’s Byculla prison on Oct. 7.

The actor’s release was hailed by her peers in Bollywood.

“Hope her time in jail has sufficed the egos of a lot of people out there who in the name of justice for Sushant fulfilled their personal/professional agendas. Praying she doesn’t become bitter towards the life she has ahead of her. Life is unfair but at least it’s not over as yet (sic),” actor Taapsee Pannu tweeted.

Actor Huma Qureshi tweeted, “Everyone owes #RheaChakraborty an apology. And, there must be an investigation into the people who started these murder conspiracy theories. Shame on you for destroying a girl and her family’s life for your agendas (sic).”

Ever since the names of some actors allegedly came up in WhatsApp chats during the investigation of Rajput’s death, Bollywood has been under NCB scrutiny.  Shraddha Kapoor, Sara Ali Khan and Deepika Padukone were recently called in for questioning by the NCB in Mumbai.

The role, if any, of Chakraborty in Rajput’s death, and the manner of his death — hanging or suicide — have been ongoing subjects of speculation in the Indian media. The case has taken many twists and turns, with Rajput’s family filing an abetment to suicide case against Chakraborty and alleging that she siphoned INR 15 crore ($150 million) from his bank accounts, confined him against his will, administered drugs to him and kept him away from his family, among other charges.

In granting bail, the Bombay High Court said there was no evidence to show Chakraborty was part of a drug syndicate, as the NCB had alleged. One of the charges was that she had bought drugs for Rajput. The High Court stated that “simply providing money for a particular transaction or other transactions will not be financing of that activity.” It also said that “the allegations of spending money in procuring drugs for Rajput does not mean she had financed illicit traffic.”

Chakraborty will have to submit INR 1 lakh ($1,365) as a bond, visit the nearest police station for 10 days after her release, and deposit her passport so she cannot travel abroad.

In her bail application, Chakraborty said she had been subjected to a witch hunt by multiple agencies. She also said Rajput took advantage of those close to him to feed his drug habit. She had filed an affidavit with the Supreme Court in August against an alleged “media trial” by certain sections of the press.

“I am so relieved Rhea has, finally, got bail,” said Yasmin Kidwai, a Delhi-based documentary filmmaker and municipal counselor for the Indian National Congress. “The narrative on the TV debates over the last few months has been extremely distressing and anti-women. The way the media had been judgmental and feeding hate was appalling. And sadly, this barrage of venom percolated to a large number of people.”

Vikas Singh, the lawyer hired by Rajput’s family, said, “As far as Rhea’s bail is concerned, it is unrelated to the death of Sushant Singh Rajput. It is a weak case under the NDPS Act and her bail is of no consequence as far as our case is concerned. As for the drug angle, the real question is whether Rhea administered drugs to Sushant with his knowledge or without it. And in either case, did she inform the ‘eminent’ doctors treating Sushant that he was also taking drugs other than the ones prescribed by them?”

Singh said this will be the crucial question for the trial.

“Even if it is a case of abetment to suicide, the drug angle will be crucial for the trial of Sushant’s death.”

Three central agencies are investigating the case. While the Central Bureau of Investigation is looking into Rajput’s death, the Enforcement Directorate is investigating alleged financial irregularities, and the NCB was called in when WhatsApp chats from Chakraborty’s phone supposedly revealed that she had been procuring drugs.

“The Mumbai Police was doing an honest and impartial enquiry till the BJP decided to politicize the death with an eye on the Bihar elections, and to defame the Maharashtra government,” said Sachin Sawant, spokesperson, Maharashtra Congress. “Now, it has turned into a political witch-hunt. The goalposts have been changing every day with media houses, many of whom are controlled by the Modi government, spreading baseless rumors. There is a clear conspiracy, with thousands of profiles on social media platforms such as Twitter and Facebook spewing artificially generated public rage for political gains.”
Although Chakraborty is out on bail, the NCB said it will challenge her bail in the Supreme Court.

“She is out on bail but that does not mean the case has been dismissed,” said Barnali Basak, a Supreme Court lawyer. “The Bombay HC used its discretionary power to grant her bail, but she can be rearrested if any incriminating evidence is found against her. Till then, she has to cooperate with the investigation and appear before the court for every hearing.

“The court will conclude about her guilt under the NDPS Act only after it has gone through all the evidence and has examined all the witnesses. It is a long-drawn process, and if she is found guilty, she will be imprisoned or will have to pay a fine or do both.”