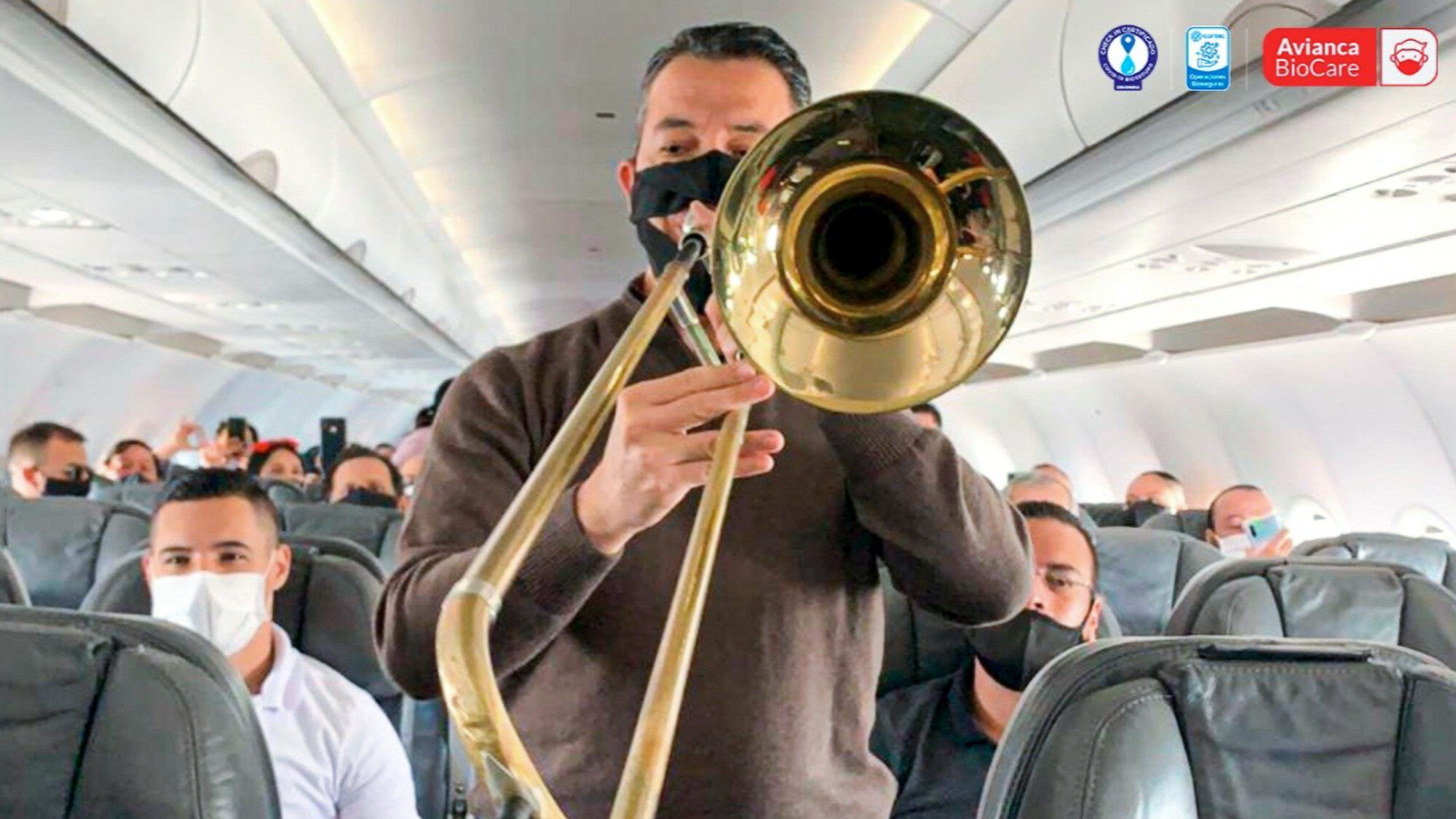 A man plays a trombone during the concert on the plane in an undated photograph. (@Avianca/Newsflash)

Passengers either boarding or flying on two separate Colombia-based Avianca flights were treated to musical concerts sponsored by the carrier.

But the in-flight performance has drawn flak from authorities, who say it violates pandemic-related safety protocols.

The on-board concert, featuring the brass section of the Medellin Philharmonic Orchestra, took place aboard flight AV8565, which regularly travels from the José María Córdova International Airport near Medellin to Bogota. The second performance took place at the same airport on the same day, but was limited to a brass band playing at the boarding gate for flight AV0030, which goes to Miami.

In both cases, the musicians were part of a publicity push by Avianca. The airline hoped its passengers would “enjoy the best art has to offer.”

But Colombian authorities aren’t happy with the in-flight version of the publicity stunt, with the Civil Aeronautical Special Administrative Unit saying it has started a preliminary investigation into the flight for running afoul of the international Biosafety Protocol.

“Avianca’s AV 8565 flight is where a Biosafety Protocol was allegedly violated, established for air transportation according to Resolution 1517 from Sept. 1, 2020,” the unit stated.

The orchestra disagrees, releasing a statement saying it “followed the protocols of the airline and the airport” and chose the brass instruments “with the knowledge of European orchestra studies,”  which it used as a reference. Those studies, the orchestra contends, “have found that said instruments do not spread drops of saliva due to their technical characteristics.”

It was not immediately known what possible sanctions Avianca faces, if found guilty of a violation. It’s also unclear whether the orchestra might also face legal action.

Avianca’s efforts to get passengers back in the sky by adding a musical interlude reflects the dire state of airlines, as pandemic-related restrictions and fears have greatly impacted traffic.

That reality was reinforced on Oct. 6, when major jet-maker Boeing released its annual forecast for the global aerospace market. Boeing projects the commercial aviation and services markets will continue to face “significant challenges” for the foreseeable future.