The Taqueria at the End of the World: At the Top of Alaska, Try the Tamales

A few miles from the northernmost tip of the U.S., a couple from Cuba and Mexico serve locals who grew up on bowhead whale. 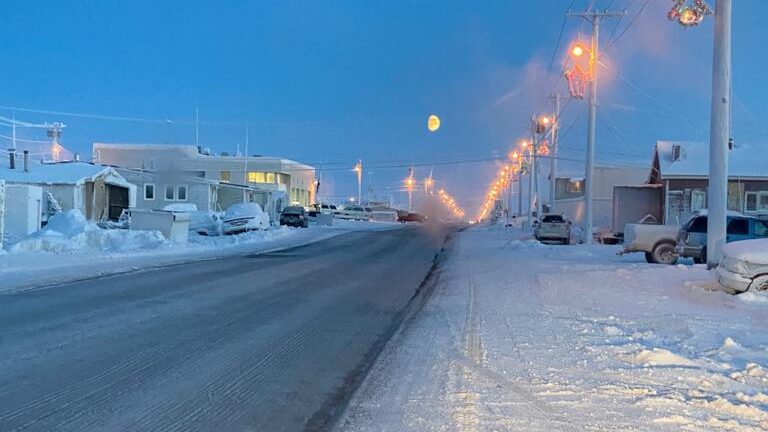 A street in in Utqiagvik, Alaska in an undated photograph. (Courtesy: Cruz Peñuelas)

America’s northernmost inhabited settlement witnesses the last sunset of the year in mid-November. But the small population of the town formerly called Barrow, Alaska—officially 4,933 as of five years ago—doesn’t sleep through the 65 days of darkness and minus-50 temperatures that follow.

Liliana and Cruz Peñuelas opened their doors in 2014, two years before Barrow residents decided by a margin of just six votes to restore the town’s Iñupiaq name, Utqiagvik (“Oot-KAH-gr-vik”). Because the settlement has been home to indigenous people for more than 1,500 years, the couple needed permission from their tribal council, the Inupiat Community of the Arctic Slope, to operate.

Cruz’s serves 18 dishes, from enchiladas and nachos to fajitas and tamales. It isn’t the first taco spot to open in Utqiagvik. Pepe’s North of the Border served the community from 1978 until 2016, when a fire consumed it.

But Cruz’s is the first taqueria to be owned by Latinos. While Pepe’s served Tex-Mex food, Cruz and Liliana embrace authentic Mexican gastronomy, especially dishes traditional to the state of Sinaloa.

Cuban-born Liliana left the island in 1966 for Puerto Rico. Joining a friend who worked at Utqiagvik’s only hospital, she moved in 1990 and made this remote outpost her home.

She met Cruz in Utqiagvik, long after his 1985 migration from his native Sinaloa to California, and then years later to Alaska.

The couple were delighted by how the Iñupiaq community embraced their cuisine. “They eat way more spice than Mexicans,” Cruz tells Zenger News, explaining how the local community tries everything on the menu. “They prefer Jarritos, a Mexican brand of sodas, over American drinks.”

Tourists visiting the Iñupiaq Heritage Center or the Gateway to the Arctic, a whalebone arch that celebrates Utqiagvik’s tradition of subsistence whaling, have stopped by the taqueria for years with the curious look of someone who just spotted a KFC in Beijing.

The deadly coronavirus had other ideas in 2020.

“Hundreds of tourists and students visit Utqiagvik every year. But this year they couldn’t come because of Covid-19,” Cruz says.

The Alaska Department of Health and Social Services reported on September 24 that the state’s North Slope Borough, an area bigger than Utah that’s home to Utqiagvik and seven smaller villages, has seen a total of 115 cases. At least 89 of them have come from Utqiagvik, where residents are living under a “hunker down” order until Oct. 5.

Seven hundred miles south in Anchorage, María Elena Ball wonders if her own restaurant will see the end of Covid-19. “Mexico in Alaska” is delivery-only for now, and loyal regular customers are helping her keep going.

The pandemic reminds Alaskans how isolated they are, she tells Zenger. “People went crazy and emptied the stores” when deaths began to mount all over the world, says María Elena. “There was no flour, and I had trouble buying rice and beans.”

“Later, the stores rationed some goods: one could buy just one 25-pound bag of rice per person.” Stores suggested she get friends to buy things for her.

The challenges pile up as Anchorage marks its 4,000th Covid case.

“Produce did not arrive this week because ships had trouble with the storms,” María Elena says. “We usually order goods one week in advance. If produce does not arrive within a week, I am in trouble.”

The U.S. Census estimates that more than 50,000 Latinos lived in Alaska last year, about 10 times as many as the entire population of Utqiagvik.

When she arrived in Alaska in 1968, “there were not even 10 Hispanic families in Anchorage,” she says. And when she opened her restaurant in 1972, Alaskans hardly knew anything about authentic Mexican cooking.

“They just knew enchiladas,” she says. But she introduced genuine Mexican specialties from Michoacán state, Mexico, where she was born—a 4,875-mile road trip to the south—including mole, the traditional Mexican sauce based on chocolate, nuts, spices, and peppers.

Because the right ingredients were scarce in Alaska, María Elena’s mother sent her dried peppers and spices from San Antonio, Texas.

She says being able to get locally made tortillas back then “was a huge advantage. We began making simple things: tacos, quesadillas, and burritos.”

Liliana and Cruz can’t go to a Fred Myer or Walmart for serrano and habanero peppers. Anywhere in the “lower 48,” these ingredients are easy to get. But bringing anything to their doorstep is a challenge.

Utqiagvik is 500 miles from Fairbanks, the largest town in central Alaska. The Dalton Highway ends at Prudhoe Bay, more than 200 miles to the southeast.

“All our supplies come from abroad,” Cruz says. “We work with a local company that brings meat and other ingredients. Also, when I travel to Anchorage or Mexico, I buy what I need.”

The pandemic has made resupplying even more difficult. Freight may be delayed by more than a month, which means food can go bad before it arrives.

Cruz pays steep prices for fresh produce at the local grocery, but it’s better than waiting for freight. “Especially in the winter, produce would arrive frozen, and it would not work,” says Cruz.

The Beaufort Sea begins to freeze by mid-October, and the taqueria at the end of the world stays open. When temperatures drop to 50 degrees below zero, Cruz partners with local taxis for delivery service.

Even in the 24-hour-long night, when “we recognize people by the color of their parkas,” Utqiagvik’s three cab companies transport tacos. “People here do not make excuses,” he says.