The VP and his challenger sparred about the Supreme Court, race, tax cuts, health care, global warming and the Covid-19 pandemic. 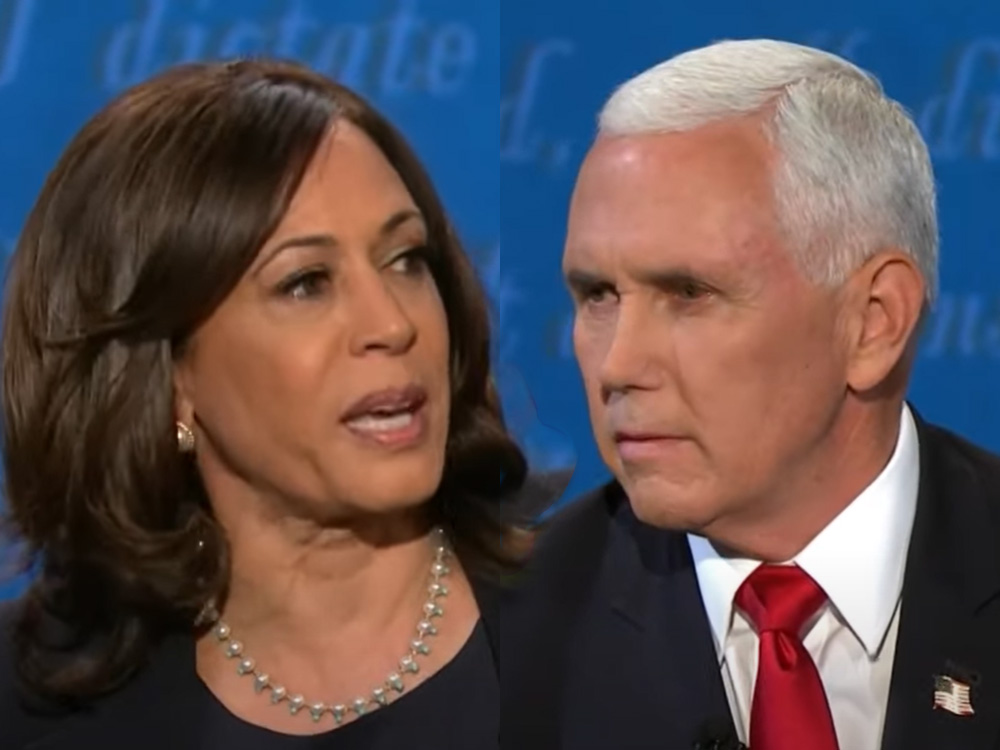 Partisan sniping led off Wednesday’s vice presidential debate and never subsided, with Sen. Kamala Harris insisting that “210,000 dead bodies” of Americans killed in the Covid-19 pandemic are an indictment of the Trump administration and Vice President Mike Pence countering that Joe Biden’s plan largely plagiarizes the one he developed as head of the White House’s coronavirus task force.

A 90-minute-long and one-inch-deep examination of practiced gotchas and talking points, the debate touched on the U.S. economy, the Supreme Court, abortion, police brutality, racism, tax cuts, health care, global warming and the Covid-19 pandemic—and even the possibility that an aging president might be the harbinger of a rare vice-presidential elevation to the top job.

“As of today they still don’t have a plan,” she said. “This administration has forfeited their right to re-election based on this.”

Pence boasted that Trump had suspended all travel from China in the beginning days of the global crisis, saying that “Joe Biden opposed that decision. He said it was xenophobic and hysterical.”

He said later that Biden “has been a cheerleader for Communist China over the last several decades.”

Harris, the first African American woman to win a place on a major U.S. political party’s presidential ticket, found her most powerful voice recalling George Floyd, the black man whose May 25 death in Minneapolis became a global rallying cry for racial justice.

Pausing and then restarting, she spoke of “the 8 minutes and 46 seconds that Americans witnessed, during which an American man was tortured and killed under the knee of an armed, uniformed police officer.”

“And people around our country of every race, of every age, of every gender, perfect strangers to each other, marched shoulder-to-shoulder, arm in arm, fighting for us to finally achieve that ideal of equal justice under law,” she said.

“There’s no excuse for what happened to George Floyd. Justice will be served,” he said. “But there’s also no excuse for the rioting and looting that followed.”

Pence landed his most effective lines as he sought to position Harris and Biden far to the left of America’s mainstream on tax increases and the much-maligned “Green New Deal”—a package of environmental proposals promoted by Congress’s few self-described democratic socialists.

The Pence–Harris debate was overall a calmer affair than last week’s battle between Trump and Biden, which was marred by dozens of acrimonious interruptions, mostly on Trump’s side.

Wednesday’s biggest diversion was the fly that lodged in Pence’s hair for two full minutes. By night’s end the insect had its own Twitter account.

Diehard devotees of political Twitter not focused on the fly obsessed over Pence’s left eye, which appeared bloodshot all evening.

Pence often muscled his way into discussions and exceeded his allotted time, interrupting Page when she tried to correct him.

He dared Harris to deny that she and Biden planned to “pack” the Supreme Court by expanding its numbers beyond its standard complement of nine if they should prevail in an election after Trump’s pick for a current vacancy, Judge Amy Coney Barrett, wins confirmation.

That idea, expanding the Supreme Court in order to change its political balance, has received an infusion of oxygen in the past week as the Republican National Committee made it part of its daily diet of talking points.

“Your party is actually openly advocating adding seats to the Supreme Court, which has had 9 seats for 150 years?” Pence asked Wednesday. “This is a classic case of, ‘If you can’t win by the rules, change the rules.’”

“They are going to pack the Supreme Court if they somehow win this election. Men and women, I’ve gotta tell you, people across this country, if you cherish the Supreme Court, if you cherish the separation of powers, you need to reject the Biden-Harris ticket come Nov. 3 and re-elect President Donald Trump,” he said, making a rare direct appeal to the public for votes.

And he jabbed repeatedly over Biden’s pledge to repeal Trump’s signature Tax Cuts and Jobs Act of 2017, a source of pride at the White House and caution among Democrats who are loath to be accused of raising tax rates of any kind.

Page gave him a hand by asking Harris: “Would raising taxes put the recovery at risk?”

“You have Donald Trump, who measures the strength of the economy based on how rich people are doing,” the senator said, “which is why he passed a tax bill benefiting the top 1 percent and the biggest corporations in America, leading to a $2 trillion deficit that the American people are going to have to pay for.”

Pence said he and Trump had inherited “the slowest economic recovery since the Great Depression.”

“President Trump cut taxes across the board,” he said, echoing the White House’s claims that a typical American family of four saved $4,000 dollars per year.

“But America, you just heard Senator Harris tell you: On day one, Joe Biden’s going to raise your taxes.”

“That’s not what I said,” said Harris.

She said a Biden administration would not raise income taxes on American households with less than $400,000 in annual income.

Back on offense, she leveled an attack at Trump for prosecuting a trade war with China, saying: “He lost that trade war. He lost it.”

“Lost the trade war with China? Joe Biden never fought it,” Pence said in reply. “Joe Biden has been a cheerleader for Communist China over the last several decades.”

“When Joe Biden was vice president we lost 200,000 manufacturing jobs and President Obama said they were never coming back,” he said.

Wednesday’s pairing was America’s most hotly watched political proxy battle since Geraldine Ferraro was the Democrats’ vice presidential nominee in 1984.

Both candidates would be second in command to the oldest president in history. Neither would address directly the idea of taking over for a commander-in-chief struck dead by illness. Trump revealed to the world Friday he had been diagnosed with Covid-19, renewing a national conversation about the mortality of the president.

“The care the president received at Walter Reed hospital and by White House doctors was exceptional, and the transparency that they practiced all along the way will continue,” Pence said. “The American people have the right to know about their President, and we’ll continue to do that.”

Harris boasted of Biden’s transparency. He has released health records in a fashion typical of presidential campaigns, and pledged to release the results of every Covid-19 test he takes.

The Trump administration and re-election campaign have sown confusion about the timeline of his diagnosis.

The 61-year-old Pence and 55-year-old Harris, a California Democrat, are significantly younger than Trump, 74, and former Vice President Joe Biden, 77. Should Biden become president, he would be older on Inauguration Day than Ronald Reagan was after eight years in office.

Add that Trump has spent most of the past week fighting off a Covid-19 infection—he claimed in a video message filmed Wednesday, maskless and outdoors, that he feels no remaining symptoms—and the potential impact of being a heartbeat away from serving in the Oval Office has seldom been as acute.

The last time a sitting president died in office, other than the Kennedy assassination, was Franklin Roosevelt during his fourth term, 75 years ago.

The 25th Amendment to the U.S. Constitution dictates what would happen if Trump or Biden should not live out his term as president: Either Pence or Harris would take over.

In the night’s opening barrage of Covid recriminations, Harris sought to identify with Americans she said had been “standing in a food line” earlier this year “because of the ineptitude of an administration that was unwilling to speak the truth to the American people. … The American people have had to sacrifice far too much because of the incompetence of this administration.”

And she said Pence had presided, with Trump, over a cover-up.

“Can you imagine if you knew on Jan. 28 as opposed to March 13 what they knew, what you might have done to prepare? They knew and they covered it up.”

She said also that if a vaccine emerged and Trump recommended it, she would abstain.

Pence lashed out at Harris for what he said was her effort to “undermine public confidence in a vaccine.

“I think [it] is unconscionable. And Senator, I just ask you, stop playing politics with people’s lives,” he said.

Asked what they hoped their home states would do if the Supreme Court rolled back the landmark 1973 Roe v. Wade abortion rights decision, neither Harris nor Pence spent much airtime addressing abortion itself, instead sparring over faith and the nomination of Amy Coney Barrett to fill the vacancy left on the high court when Justice Ruth Bader Ginsburg died Sept. 18.

“She’s a brilliant woman and will bring a lifetime of experience and a sizable American family to the Supreme Court of the United States,” Pence said. “And our hope is in the hearing next week, unlike Justice Kavanaugh received with treatment from you and others, we hope she gets a fair hearing.”

Barrett has come under fire for her devout Catholicism since her nomination. Harris insisted Wednesday that neither she nor Biden would take part.

“Joe Biden and I are both people of faith, and it’s insulting to suggest that we would knock anyone for their faith. And in fact, Joe, if elected, will be only the second practicing Catholic as president of the United States,” she said.

Harris finally addressed abortion rights for mere seconds, “I will always fight for a woman’s right to make a decision about her own body. It should be her decision and not that of Donald Trump, and the vice president, Michael Pence.”

Page, the moderator, kept a tighter leash on the candidates than Fox News Channel anchor Chris Wallace did during the first Trump–Biden debate, arguing with Pence when he exceeded his allotted time and reminding both him and Harris that their answers to her questions were to be “uninterrupted.”

A “small and socially distant audience” was present, Page said. Pence and Harris were separated by a 12-foot buffer zone, seated at desks with a pair of Plexiglas sheets between them. All attendees were required to wear masks. Neither Page nor the candidates wore them.

Frank Fahrenkopf, the chairman of the Commission on Presidential Debates, which sponsored Wednesday night’s debate, announced from the stage that anyone refusing to wear a mask would be ejected.

“We beg you please do not take off your mask,” he said, according to a pool reporter.