The participants agree on the vision of a free, peaceful and secure Indo-Pacific region, a major concern for the U.S. 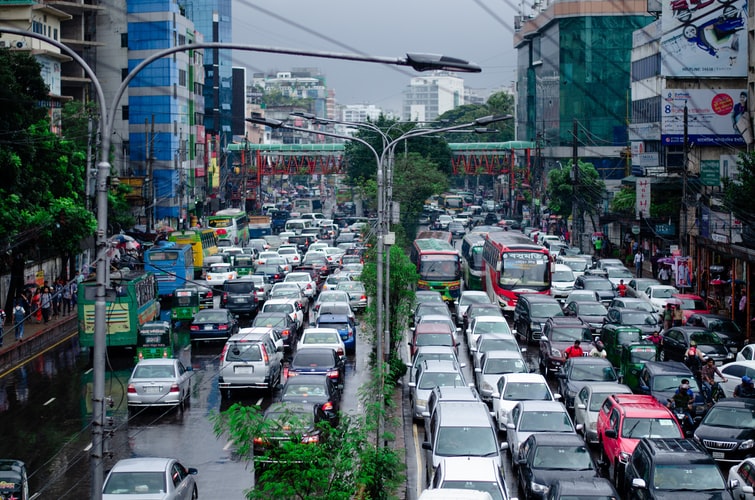 A street in Dhaka, one of the most populous cities in the world. While Bangladesh has maintained a cordial relationship with most of the countries in the region, except for some bilateral disputes with Pakistan and Burma, it places specific importance on its relationship with China and the United States. (Courtesy: Souro Souvik/Unsplash)

The first high-level meeting between Bangladesh and the United States aimed at advancing the two countries’ economic partnership is also widely seen as another step by the U.S. to challenge China’s presence in the region.

“The meeting participants noted that the United States and Bangladesh share the common vision of a free, open, inclusive, peaceful and secure Indo-Pacific region with shared prosperity for all, and expressed hope that the two countries would continue to work together to realize this vision,” a joint statement from the two governments says.

While Bangladesh has maintained a cordial relationship with most of the countries in the region, except for some bilateral disputes with Pakistan and Burma, it places specific importance on its relationship with China and the United States.

“The consultation between the two nations is to geopolitically balance the excess presence of China in the region, and particularly to keep an eye on the Bay of Bengal region,” said Ishani Naskar, a political science professor at Rabindra Bharati University. “Bangladesh has to keep itself guarded against the Chinese. They cannot be overtly dependent on them.”

China is the largest military supplier to Bangladesh, while the U.S. is one of the largest export markets for Bangladesh. The country’s relationship with Russia was strengthened after Russia provided technical assistance for military modernization and loaned $11.3 billion for a nuclear power plant.

“Bangladesh would continue to pursue economic diplomacy proactively with the neighboring, regional and global players. The U.S. is Bangladesh’s largest export destination and the largest investor in the country,” Salman F Rahman, the private sector industry and investment adviser to Prime Minister Sheikh Hasina, tweeted.

The U.S.-Bangladesh statement says: “Consistent with the United States’ commitment to enhancing commercial ties for a free and open Indo-Pacific region the U.S. side described the role the U.S. Trade and Development Agency and the U.S. Export-Import Bank could play in generating new economic activities as enablers for U.S. investment in and deals with Bangladesh.

“The Bangladesh side also welcomed the U.S. government’s intention to open a Foreign Commercial Service Office in Dhaka, as well as the continuation of a USAID project that would contribute to further improving Bangladesh’s business environment.”

“Bangladesh is consistently engaging with the international communities to mobilize aid, assistance and funds from different sources. In the last 40 years, the U.S. has been a constant support to Bangladesh for aid and assistance — food aid, project aid and developmental aid,” he said.

Government and nongovernmental institutions “understand the needs for the development of their country. Therefore, they have been always humble towards the international communities,” said Bharadwaj. “They have been supportive of the progressive values to combat terrorism, encourage secularism and participate in the UN Peace Keeping Forces. Hence, the Western world has projected Bangladesh as a role model for the Islamic states, and that is their strength.”

Over the years, Bangladesh has transformed from an agriculture-based economy to a services and industrial economy. The country also brings in $70 billion every year from remittances.

Between 1990 and 2018, Bangladesh’s Human Development Index (HDI) rose from 0.388 to 0.614, or 58.3 percent. “They have become the leading exporters of ready-made garments to the U.S. They are doing good in the fishing sector, and they have an excellent progression in the HDI,” he said.

Naskar said a nation need not always be aggressive, and that being diplomatic is nothing new.

“They have converted themselves from a weak economy to a surviving economy,” she said of the country. “They have very good relationships with the U.S. and China. The geopolitics and strategic angles have changed now. It is quite sensible for the country to maintain a balanced diplomatic relationship with all the countries from where it could get help.”

In 1985, Bangladesh initiated the South Asian Association for Regional Cooperation as geopolitical tensions ramped up. “They are small but an important player in South Asia,” Naskar said.

Among the notable outcomes from the virtual consultation on Sept. 30 is the U.S.-Bangladesh Open Skies Air Transport Agreement, beginning the process for Biman Bangladesh Airlines to resume nonstop services to the United States. The national carrier’s Dhaka-New York service was suspended in 2006 due to operating losses. The Bangladeshi population in the U.S. is estimated to be 57,000.