James says boxers who want to be great trainers must “take themselves out of the equation”—stop relying on what worked for them. 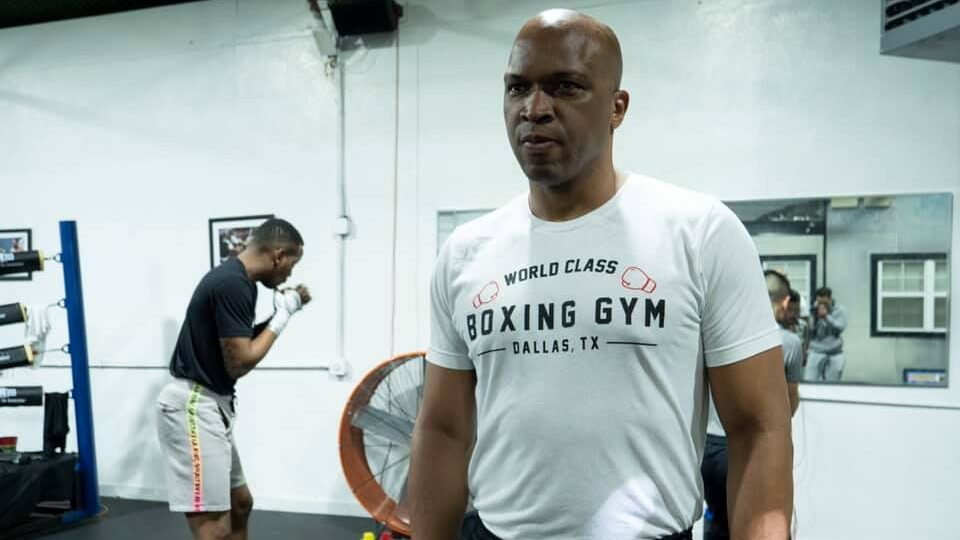 Derrick James is the only active boxing trainer to currently work with two reigning unified world champions in their weight classes. (Courtesy of Derrick James/Facebook)

If Derrick James wasn’t already the best trainer in boxing today, he has firmly placed himself in the top ranks this year. Based in Dallas, James trains two unified world champions: welterweight Errol Spence Jr. (26-0 with 21 knockouts) and junior middleweight Jermell Charlo (34-1 with 18 knockouts). A former fighter himself, James’s knowledge of the sport is on full display every time one of his pupils steps in the ring. And on Saturday night Charlo joined his stablemate Spence as a unified world champion.

James is the only active trainer to have two reigning unified champions, making a strong case for him to nab the coveted Trainer of the Year award a second time. (Ring Magazine and Yahoo Sports awarded it to him in 2017.) Consistency is key in the Derrick James stable; Spence and Charlo’s combined record of 60-1 with 39 KOs is straight-up evidence.

James opened up about the most recent win, and much more, during our recent conversation.

Zenger: Your two world champions are in arguably the toughest divisions in boxing, welterweight and junior middleweight, so I’m sure you’re keeping the celebrations at a minimum because the next tough challenge is already looking at your guys.

Zenger: What did you see in Jeison Rosario as an opponent heading into the fight?

So then in the 6th round Jermell threw a short left hook, not a long wide one, but a shorter one, and that’s how he caught him the second time and put him down. He was a tough guy. When you watch him you really don’t see anything because it’s hard to get around those hands. He has good defense with his hands up and it’s hard to get around that. But that was the thing: We had to get around it so we had to punch around it or get him to open up in the middle. He wasn’t doing that. But he adjusted just enough to those wide shots to allow Jermell to catch him with a short left hook.

Zenger: You were a fighter before, so you know what it’s like to be in there. Many are saying that the body shot didn’t look hard enough to have Rosario convulsing on the canvas. To me, it appeared he was doing whatever it took to try and catch a breath after the shot to his midsection.

James: To be honest, I’ve been in boxing for, like, 42 years and I’ve never seen anything like that. He caught him by surprise. He threw the jab up top and then this strong power jab to the body. I have never seen anything like that. Like you said, it looks like he was convulsing or having a seizure. I heard someone say he tried to catch his fall. Yeah, because he wasn’t knocked out. He was coherent. He was awake. He kind of passed out when he was on the ropes. A lot of things were going on with him. I’m just happy he’s okay, man.

Zenger: I think people underestimate what the body would do to attempt to catch a breath. It’s almost like drowning or being asleep and someone puts a pillow over your face. He had that type of reaction just trying to breathe.

James: You know what, now that you say that you might be right about that. He got his right in the middle of the stomach, man. The thing about it: Body shots hurt, head shots don’t hurt. I didn’t think about it like a person drowning, but that’s right.

Zenger: Where does that put Jermell in the division, in your opinion?

James: Well, that was the two top dogs in there fighting on Saturday night, and he won. It’s almost like there was a tournament going on and nobody knew about it. He was able to get his title back and get his shot. It was a beautiful night.

Zenger: Did you see a change in Jermell after the loss to Tony Harrison?

James: I think I saw the change in Jermell when we were getting ready to fight the rematch with Harrison, but not the one he pulled out of. When he had the sit down—we had this deal where we went to Fox Studios, and you watch the fight and tell them what you’re doing and what you think is going on. I think him watching the fight and watching himself and having to explain it, I think that was the change.

Then after he beat Tony Harrison, he went back and looked at that fight. I already had things I wanted to work on from the Harrison fight when he came back to camp, but then he had the same ideas that he wanted to work on. So it was beautiful, because he was already in shape when I got there, and we just built from that.

Zenger: One thing is for sure, with the pandemic, quarantine and limited travel and access to gyms, we are seeing which fighters have been showing discipline during these times, and the ones who aren’t. Jermell was in phenomenal shape for this fight. As a coach, you had to be both happy and proud that he stayed on track during these wild times.

James: It was beautiful because he was able to be focused and work towards his personal goals. Something like this presented to him on this level, to say you can be the unified champ, it’s amazing. He really appreciates the opportunity, and you saw—he made the best of it.

Think about Lennox Lewis, right? He retired on his own accord. He left when he wanted to. He can embrace a fighter because, you know why? He was done with it. Think about all the guys who they typically ask about these fights. It’s usually fighters who can’t let it go. They didn’t go out on their own terms. They were pushed out. So you really can’t get them to embrace any of these guys unless it’s their guy. If it’s not their guy, it’s hard for them. It’s unfortunate, but that’s the nature of the fighter.

That’s not saying they are better than you were, but we have to admit that these guys are good, and they are great as well. Kanye West had a verse, which I don’t really like to quote him, but he said, “Old folks talking ‘bout back in my day, but homie, this is my day.” That’s the reality of it.

Zenger: I watched a video of you taking all the safety precautions in your gym and having things sanitized. Did that change things for this last camp, or did you let the sanitation team handle the cleaning and you were able to just do your thing in there?

James: We let them do their job. I’m not a guy that likes a lot of people in the gym anyway, you know that. But this is something that really and truly—you really can’t come in now! Corona is my friend in that respect. You can’t come in! And I like it like that anyway. You want to make sure everything is taken care of. I like Corona for that, but just for that. Unless you’re taking a test twice a week, then you can’t come into the gym. It’s all good.