As drug addiction ravages tribal families, the women — who are allowed to leave home only in extreme cases — rise up. 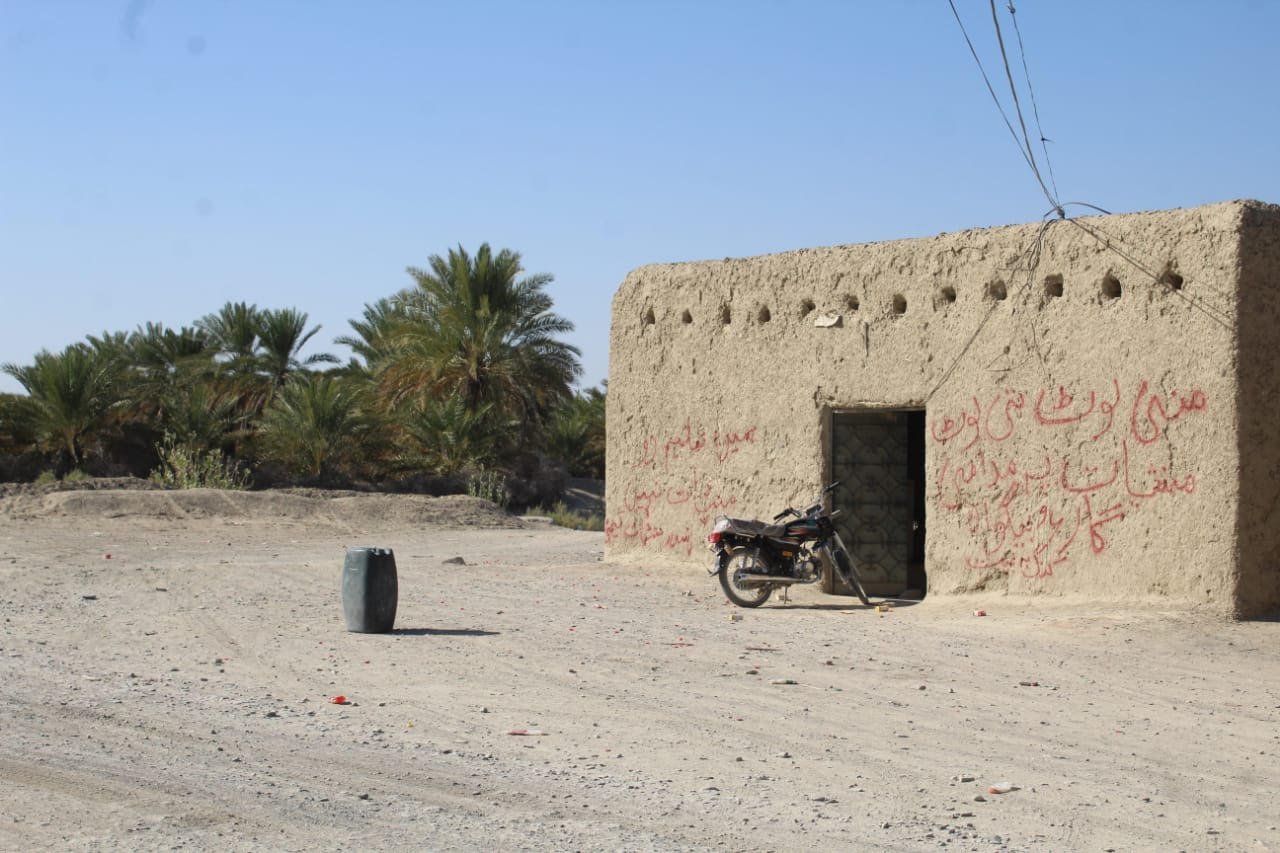 Wall chalking on a shop in Baleda market in Balochistan, Pakistan, reads “give us education, not drugs”. (Courtesy: Abdul Munaim.)

Drug addiction in the most underdeveloped province of Pakistan has forced its women to come out in the open and fight the menace.

The situation reached a tipping point in March when about a dozen women and 20 girls of the Baloch community, many from tribal families and  who rarely leave home — held a march demanding an end to the epidemic and burned down six drug dens in the bazaar of Baleda.

No one was inside the dens when they were burned, but the women’s actions sparked youngsters and elders to join their campaign.

The movement started after one woman’s patience ran out:

“My drug addict husband snatched 300 rupees ($1.8) to buy drugs. I had saved the money for my daughter’s necessities. At that moment, I decided this has to stop,” said Razia Bibi, a resident of Baleda,  a town in the Kech district of Balochistan.

Razia, recalling happier days, said she was married 35 years ago and has four sons and two daughters.

“About 10 years ago, my husband and after some time, my two sons — one of them was married and a father of two — became addicted to drugs. With that, the toughest days of my life began,” Razia said. “At that time, my children were young. My youngest daughter was in first grade.”

The problems escalated for Razia when her husband quit his job. She sewed clothes, did embroidery and worked hard to run the family. But a large portion of her earnings was taken by her husband and sons to buy drugs.

“I don’t know about the rest of the world. In our Baloch society, if a husband, father or son goes astray or gets addicted to drugs, the women of the house suffer the most. That’s what happened to me as well.”

Razia’s patience ran out the day her husband and sons took the 300 rupees from her.

“I immediately wore my burqa and went out to all the houses where the drug addicted men resided. I talked to the affected women as to how we could end this menace and save our men,” she said.

Gul Bibi, the mother of four daughters and five drug addicted sons in Baleda, said Razia came to her house and talked about the plight of the women in the area and the future of their children.

“I asked her what can we, as women, do in a culture where we are only allowed to step out of our homes in extreme cases?” Gul said. “Her response shocked me.”

Razia had suggested burning down the dens of the drug mafia in the area.

The next day, Haji Barkat Baledi, a local political and social figure, approached the women who had taken the initiative, along with some youngsters.

Haji said the women of the Baloch community could not leave their homes, even in special circumstances. But when they came out to fight drug use, it became a challenge for the whole community.

Gul said she and Razia started visiting the houses where drug addicted men live and tried to convince the women of those households to join their efforts to rid the town of drugs. In time, all of the women around them joined the movement.

“Baleda is not a big area. Everyone knows each other and the people involved in the drug activities. We went to their houses in groups and tried to convince them to quit the business. Fortunately, many of them voluntarily decided to quit, while others were forced by the women of their house,” Haji said.

The women didn’t know what drove them to consider burning the places selling drugs, but their goals were clear.

“I don’t know how we got the power, energy and passion. We were unstoppable, and without looking back, we burnt down all the places where drugs were sold,” Gul said.

Razia said that when the women held their procession in March, the men of the area were in a state of shock. “Some of them tried to stop us, but our aggression was far beyond their expectations.”

Youngsters in various districts have since formed groups that monitor the drug dens at different times.

“If anyone is found dealing in drugs, they are prosecuted under the tribal traditions, in addition to seeking legal help,” Haji said.

Mir Fatah Baledi, a former member of parliament, said a lot has been achieved locally in the fight against drugs.

Razia said  that drugs are no longer available openly in her area.

“My husband has now left the area. I last heard he was somewhere in Turbat. My sons are being treated by the local anti-drug committee, which has made them much better.”

But  international smugglers continue to offer drugs to the local handlers at cheap prices and also provide them with free drugs for their services.

“The idea of eradicating or controlling drugs in Balochistan, without completely dismantling the international supply line, is a mere figment of the imagination,” Mir said.

Further, the coastal strip and mountain passes of Balochistan’s border districts have been used for years to traffic drugs into Iran, where they are moved to Europe and other regions.

Mir said the campaign that was started by the local women in the area has now become a public campaign to help control drug use.

“Baleda was an area where drugs were once common and very cheap in the streets. They are no longer common there,” he said. “Even if they are available, they are not cheap. This is because of the public campaign against the use of drugs.”

Balochistan, which shares a border with Iran, is also on the international route for drug trafficking originating in Afghanistan. The availability of drugs in the various districts of the province is greater than in other places, according to a 2019 UN report.

“In different areas of Balochistan heroin, opium, cocaine and crystal are mostly consumed by the addicts, “ states a 2018 study, “Drug Addiction: A review of challenges and solutions” by Dr. Siraj Bashir. “Balochistan is the highest consumer of opiate as 1.6 percent of the population uses either heroin, opium, or both.”