India has 21 of the world’s 30 most polluted cities, with Delhi ranking fifth. 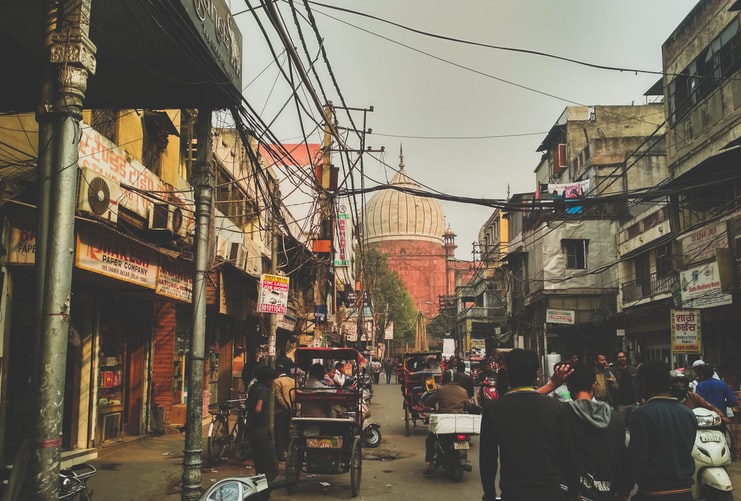 Jama Masjid in Chadni Chowk, Old Delhi. The thick smog that envelopes India's capital every winter is often the result of stubble-burning in nearby states. (Courtesy: Aquib Akhter/Unsplash.)

Every winter, the northern states of India are enveloped in a thick layer of smog, disrupting the regular course of life. This is generally attributed to the burning of straw stubble to clear the way to sow wheat, although farmers blame industries near the cities.

This year, a new technology will be deployed aimed at decomposing the straw in the fields, and recommendations have been made to improve air quality in Delhi as well, according to statements by Environment Minister Prakash Javadekar and officials from the four National Capital Region (NCR) states —  Delhi, Haryana, Uttar Pradesh and Rajasthan — and the northern state of Punjab.

Javadekar also said the five states provided details of their action plans. It was recommended that Delhi focus on its 13 pollution hotspots and finish ongoing road projects.

Illegal crop stubble burning in the northern states of Punjab and Haryana was banned by the Supreme Court last year.

Hazardous air quality is markedly higher during the winter. The Air Quality Index (AQI) crossed the 500 mark in 2019, entering the “severe-plus” category, forcing a Supreme Court-mandated panel to declare a public health emergency in the region.

While farmers are blamed for the smog and subsequent poor air quality, they hold industries responsible.

Ugharan Sukhdev Singh Kokri Kalan, general secretary of Ekta Ugrahan — a wing of the Bharatiya Kisan Union — blames Indian media for providing incorrect information about the situation. He blames the smog in Delhi on industries, not stubble burning, since the capital region is quite distant from the farms.

“The towns which are nearby to the farmland do not experience heavy air pollution. How come Delhi, which is 187 miles (300 kilometers) from the farmlands, is getting polluted by stubble burning?” he said. “I agree stubble burning might congest the air, but it cannot be the reason for air pollution in Delhi. The farmers are actually suffering from this.”

A joint study by The Energy and Resource Institute and the Automotive Research Association of India states that the major pollution in Delhi is from dust and construction activities (38 percent to 42 percent), industry (22 percent) and transport (15-17 percent).

Gufran Beig, an atmospheric scientist with the System of Air Quality And Weather Forecasting and Research, said the polluted air in the region contains PM (particulate matter) of 2.5 and 10, which today shows as moderately good air quality in Delhi.

PM is the solid and liquid particles suspended in air, many of which are hazardous.

Scientists at the Indian Institute of Tropical Meteorology (IITM) monitor air quality and release AQI data to the public.

“We are monitoring air-quality indicators and weather parameters round the clock,” Beig said.  “The data is recorded and stored at an interval of 15 minutes at the local stations. This near-real-time raw data is transferred to the central air quality management system server at the SAFAR control room in IITM, Pune.”

India has 21 of the world’s 30 most polluted cities. Delhi ranked fifth among the world’s most polluted cities in 2019, according to a study Swiss-based IQAir, which gathers air-quality data globally. Delhi’s AQI levels have been consistently higher, at times as much as 10 times higher, than those prescribed by the World Health Organization.

“Children, the elderly, and those with lung and heart diseases are the most vulnerable to this smog. Lung infections, asthma, chronic obstructive pulmonary disease (COPD) and lung cancer are the most common respiratory health effects,” said Dr. Sundeep Salvi, director of Pulmocare Research and Education Foundation. “Lung involvement occurs in 40 percent of the cases, and the remaining comprises heart attacks, hypertension and stroke.”

Salvi also said lungs damaged by air pollution are expected to have a generic effect on the whole body.

Despite measures to tackle pollution, the real problem lies with the unavailability of suitable alternatives to the burning of crops.

Farmers have the option of burying crop waste in the fields and turning it into manure, but it is an expensive option. Moreover, the farmers would have much less time to sow wheat. The short period between the end of the paddy harvest season in November and the sowing of wheat by mid-December is not enough to convert the paddy stubble into manure.

Earlier, the Haryana government had tried to curb the practice by imposing fines on farmers, leading to protests by the farmers. Ultimately, the Punjab and Haryana high court restrained those governments from imposing the fines.

India’s Supreme Court last year directed the state governments of Punjab, Haryana and Uttar Pradesh to pay INR 100 ($1.37) per quintal (100 kg) of crop as an incentive to the paddy farmers to prevent them from burning the stubble and to also provide them with machines to remove the crop residue.

However, Singh said, “Nothing is being provided by the governments,” despite court orders to give the farmers the necessary machinery.  “Nothing was received by them. They are not doing their job and are giving us (the farmers) false accusations. This year, many farmers buried the stubble waste because they were afraid of the government’s actions. The farmers faced a massive loss as the stubble waste did not decompose on time and ruined the next sow.”

The meeting held by the environment minister and officials of the NCR was the seventh in a series aimed at resolving pollution and smog issues.