Ancestral Homes of Bollywood Superstars To Be Restored in Pakistan

Actors Dilip Kumar and Raj Kapoor trace their roots to the city of Peshawar in Khyber Pakhtunkhwa. 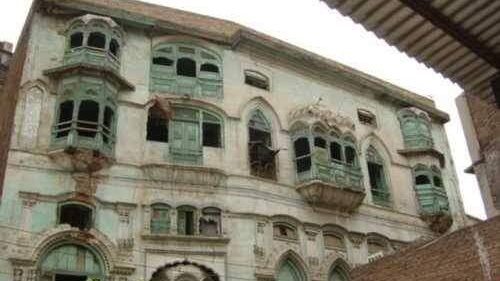 The front view of the dilapidated Kapoor Mansion in Peshawar. (Courtesy of Shakeel Waheedullah)

The ancestral homes of Indian Bollywood legends, Dilip Kumar and Raj Kapoor in Peshawar in the Khyber Pakhtunkhwa province of Pakistan will be bought, restored and converted into museums.

The homes belonged to the families of the distinguished actors who had migrated to India before the partition of the subcontinent in August 1947.

In addition to Dilip Kumar and Raj Kapoor, the ancestral home of Bollywood superstar Shahrukh Khan is also in the same city. These homes are located in the old part of Peshawar on Qisa Khwani Road (Street of Storytellers). All three actors hold iconic status in the subcontinent and are known as much for their fan following as for their body of work.

The Directorate of Archaeology and Museums, Khyber Pakhtunkhwa, has written a letter to the administration of Peshawar city informing of its intention to declare both these properties “protected antiquities.”

“Hence land in question either may please be transferred in case of state land or acquired under the Land Acquisition Act on the compulsory ground basis if has private owners ship (sic),” the letter reads.

Abdul Samad, director of the Archaeology and Museums, Khyber Pakhtunkhwa, said that Peshawar used to be the hub of culture and the arts, and efforts are underway to bring back traditional culture and traditions.

“Archaeological laws make it mandatory to protect any building over 100 years old,” said Samad. “There are hundreds of buildings in Peshawar alone that are over 100 years old and the process of identifying them is the first step in protecting history.”

He said that the acquisition of ancestral homes of Kumar and Kapoor is part of the efforts.

“After acquiring the two properties, these houses will be restored to their past glory and turned into museums,” said Samad. “We will display the movie posters and other memorabilia of the two legends.”

The two homes require major renovation. The Kapoor Haveli (mansion) is falling apart, while the less grand home where Dilip Kumar was born is in shambles.

Shakeel Waheedullah, secretary of the Cultural Heritage Council Khyber Pakhtunkhwa, a group fighting to protect the buildings, said that the current owner of the Kapoor Haveli is a jeweler who wanted to demolish the house and construct a shopping mall.

“The top two floors of the Haveli are not there anymore,” Waheedullah said. “At one stage, the archaeological department had to step in to stop the owner of the house from demolishing it. As far as Dilip Kumar’s home is concerned, it is almost nonexistent now.”

Waheedullah said that the archaeological department has the capability and the workforce to restore the homes to their former glory.

“We are campaigning to include the civil society in the team that will plan and oversee the restoration work,” said Waheedullah. “We can give our expert opinions and we have a treasure trove of old pictures of these two homes and other such old buildings, which could be helpful in the restoration work.”

Nadeem Omar Tarar, an anthropologist and adviser to the Centre for Culture and Development, said that the homes of both the legends are in a large commercial area and are in a dilapidated condition.

“Both the homes are archaeological sites according to the law of the land,” said Tarar. “This step should have been taken long ago. The plan to convert Dilip Kumar’s home into a museum was planned and it was declared a protected monument in July 2014. But the condition of the house speaks volumes of the apathy of the authorities toward cultural heritage.”

Not too far from the Kapoor Haveli and Kumar’s home is the house of another Bollywood superstar Shahrukh Khan.

“Shah Rukh’s first cousin Noorjehan was living in the house with her husband; she passed away recently,” Waheedullah said. “His house is in a good condition.”

The Kapoor Haveli was built between 1918 and 1922 by Raj Kapoor’s grandfather, Dewan Basheswarnath Kapoor. His son, Prithviraj Kapoor, who was one of Hindi cinema’s first big stars, started his career in the silent era. His son, Raj Kapoor, was born on Dec. 14, 1924, in the same house. He would go on to become one of India’s most prolific and loved stars, directing and producing in his later years. He died in 1988.

Dilip Kumar’s house was built by his father, who was a fruit merchant. Kumar was born in Peshawar as Mohammed Yusuf Khan on Dec. 11, 1922. He lives in Mumbai with his wife, Bollywood actress Saira Banu.

Kumar, on Sept. 30, while responding to a tweet with photos of his ancestral home, asked his fans to share more photos of his house in Peshawar.

The current owners of these properties could not be contacted despite repeated efforts by Zenger News.