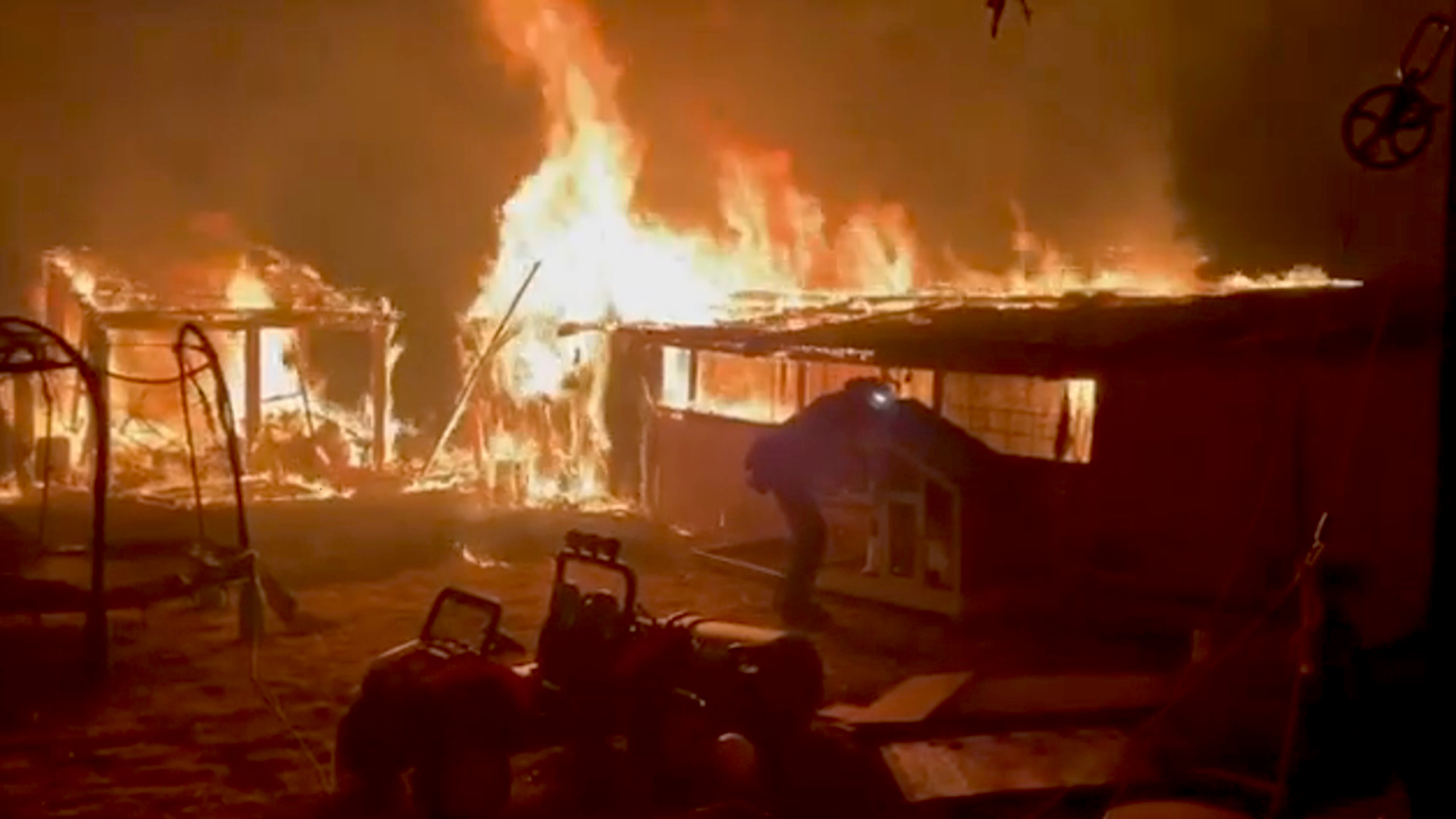 A firefighter examines a structure during the Glass Fire in Alameda County, Calif.. (@AlamedaCountyFire/Newsflash)

NAPA and SONOMA COUNTIES, Calif. – One of California’s fast-growing wildfires is producing harrowing scenes right out of a disaster movie.

Footage showing firefighters driving along a mountain road at night as the devastating Glass Fire burns woodland on both sides was filmed earlier this week in St Helena in Napa County. The fire has also ravaged adjoining Sonoma County.

“Crews are assigned to the Calistoga/St. Helena region to save homes, wineries, and vineyards,” said a statement from the Alameda County Fire Brigade, one of several area agencies pitching in to fight the fire. “While en route, firefighters are passing live fire to perform structure triage and to protect structures and livestock.”

The Glass Fire was first reported as a 20-acre bush fire in Napa County in the early hours of Sept. 27. It quickly grew and created two offshoot blazes, the Boysen and Shady fires. As of Oct. 1, Cal Fire reports roughly 57,000 acres are burning in the two counties. The Glass Fire is currently only about 5 percent contained, the fire-reporting organization’s listing on the blaze said.

Firefighters are battling the blaze on the ground and from the air. Another video shows a Cal Fire Air Attack 140 aircraft dropping fire-suppressing chemicals on the wildfire.

Crews are working on structure defense while building and reinforcing containment lines to fight the wildfire, which has already destroyed 204 structures and damaged an additional 144. According to a variety of reports, at least 20 of the buildings burnt so far were wineries, a tourism staple in the region.

It’s unclear how many people have been evacuated, but at least 68,000 were forced to leave their homes in the first two days alone.

No relief from Mother Nature is on the immediate horizon. A Red Flag Warning has been issued by the National Weather Service for the Glass Fire and North Bay Mountains starting Oct. 1 and continuing through at least the next day. Such warnings are issued when a combination of strong winds, low relative humidity, and warm temperatures, which promote or cause wildfires, are either occurring or are about to occur.

Overall, California has been suffering one of its worst recorded fire seasons in history with half of its top-ten largest wildfires coming this year — four in August and one in September. The records cover from 1932 to the present.

The largest fire in California recorded history is the August Complex, which is still burning and has leveled nearly a million acres in an area including Mendocino, Humboldt, Trinity, Tehama, Glenn, Lake and Colusa Counties. It is still just under only 50 percent contained, according to the latest update on Sept. 30.

Governor Gavin Newsom declared a state of emergency in Napa and Sonoma counties early this week and also asked President Donald Trump for a major disaster declaration to provide federal assistance for fighting the fires. That has not happened, and Trump has blamed the blazes on shortcomings with the state’s forest-management practices in recent weeks, including during Tuesday night’s presidential debate with Democratic rival Joe Biden.