The president who consistently refused to wear a mask will lead the nation from a hospital suite for at least a few days. 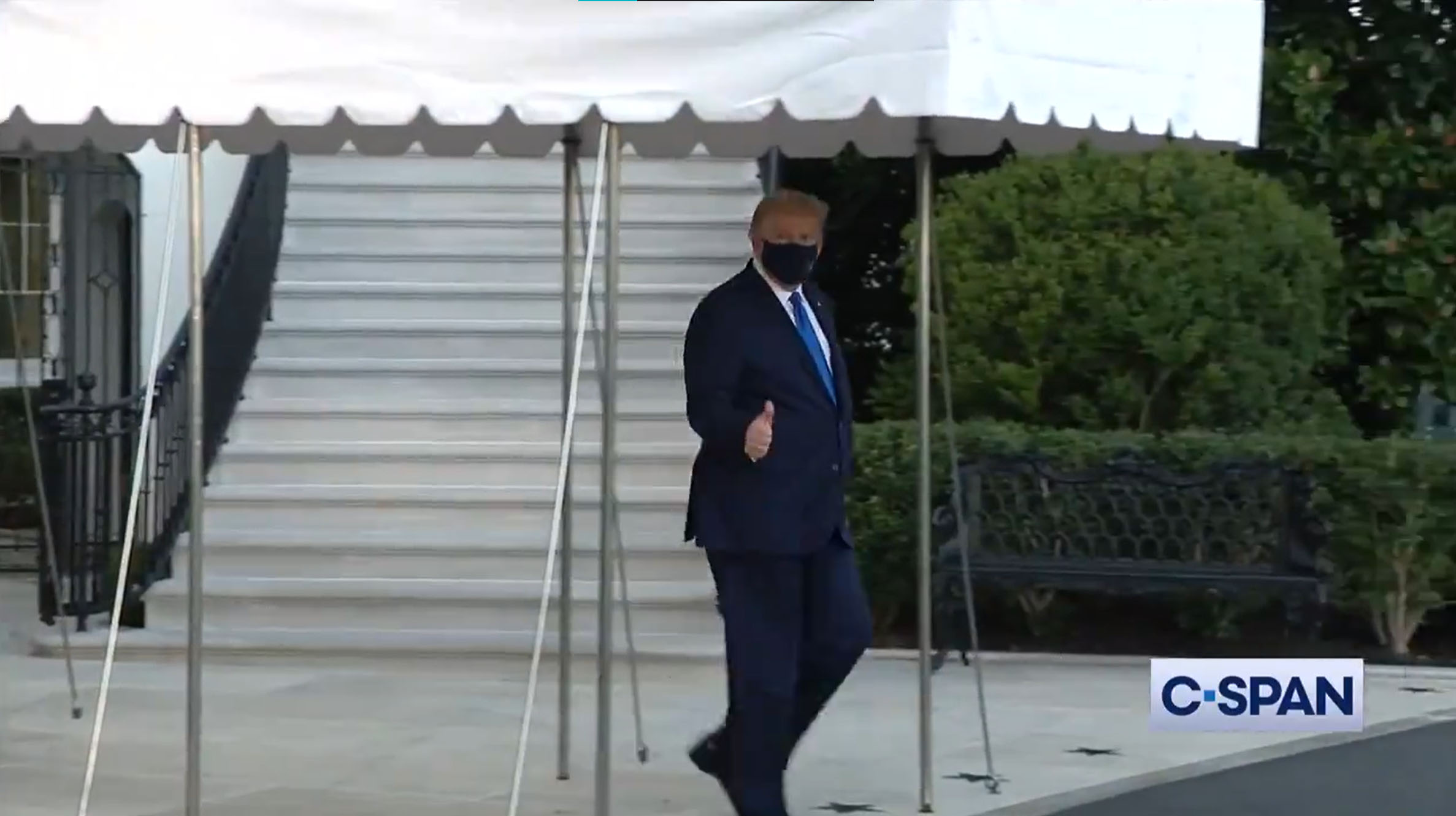 President Donald Trump, stricken with Covid-19, walked the 56 steps from the White House’s Diplomatic Reception Room to Marine One on Friday, flying to Walter Reed National Military Medical Center outside Washington for what was expected to be a stay of a few days.

Offering a furtive thumbs-up to cameras before he ambled across the South Lawn, Trump offered no defiant fist-pump and no spirited wave—only a salute to his Marine aviators. Trump’s mouth, which usually telegraphs confidence to a global TV audience, stayed mum behind a plain black cloth mask.

“President Trump remains in good spirits, has mild symptoms, and has been working throughout the day,” White House Press Secretary Kayleigh McEnany said in a statement. “Out of an abundance of caution, and at the recommendation of his physician and medical experts, the President will be working from the presidential offices at Walter Reed for the next few days. President Trump appreciates the outpouring of support for both he and the First Lady.”

Trump had received a promising experimental Covid-19 treatment, according to a memo from his doctor, Sean P. Conley. Conley described it as an “antibody cocktail” developed by the biotech company Regeneron. Initial results suggest the treatment can lower the body’s viral load when doctors administer it early enough in the course of an infection.

The president recorded a brief off-the-cuff video message moments before departing the White House. His social media guru Dan Scavino tweeted it for him, giving Trump’s 86 million followers a glimpse of his send-off.

“I think I’m doing very well, but we’re going to make sure that things work out,” Trump said.

Television news anchors scrambled for details Friday afternoon, trading on rumors that the president had a fever, congestion, a cough—and, finally, breathing difficulties. A hoarse-sounding president had spoken via video on Thursday night to an annual charity dinner in New York City.

The hospital journey capped a dramatic day of events that began shortly after midnight eastern time, when the president announced in a tweet that he and first lady Melania Trump had tested positive for the virus.

“We will begin our quarantine and recovery process immediately. We will get through this TOGETHER!” he said.

News broke Thursday night that Hope Hicks, a longtime Trump aide, had tested positive for Covid-19 hours earlier. As close to Trump as anyone in the West Wing, Hicks had traveled with the president to a campaign rally in Minnesota on Wednesday, the day after the president and former Vice President Joe Biden debated publicly.

Trump’s entourage of family members and senior aides watched the debate in person  and unmasked.

The stunning news that Trump has contracted the often-deadly virus comes as the presidential campaign enters its final month. Friday’s rally in Florida, a Saturday event in Wisconsin and a Monday rally in Arizona were all called off. Such energetic love-fests are like oxygen to Trump; his true believers are left to wonder when—if—the president would return to campaigning.

Democratic presidential nominee Joe Biden, who stood just feet from Trump at their debate in Cleveland on Tuesday, said he and his wife Jill were sending “prayers for the health and safety” of the president and First Lady.

Biden also used the moment to criticize Trump’s handling of the pandemic, which has killed more than 207,000 Americans.

Tonight, @FLOTUS and I tested positive for COVID-19. We will begin our quarantine and recovery process immediately. We will get through this TOGETHER!

“We have to take this virus seriously. It’s not going away automatically,” the former vice president said in a Michigan speech. “We have to do our part to be responsible. It means following the science, listening to the experts, washing our hands, social distancing. It means wearing a mask in public. It means encouraging others to do so as well.”

It was a not-so-subtle swipe at Trump, who has studiously avoided wearing masks in the West Wing and in public, and who now finds his re-election prospects questioned as the death toll and economic damage both mount.

The Biden campaign said it had paused delivery of all negative campaign ads after the president announced his diagnosis.

“We all know that Sleepy Joe isn’t fit to be YOUR President. We know it. You know it. And even Obama knows it – that’s why he’s holding a fundraiser with Kamala instead of Joe, who is probably already asleep in his basement,” it said.

By virtue of his age, the 74-year-old Trump falls into the high-risk category for Covid-19 patients. People in the 65-74 age range are five times more likely to require hospitalization and 90 times more likely to die from a coronavirus infection compared with young adults age 18-29, according to the Centers for Disease Control and Prevention.

Adding to the president’s health risk is a pre-existing condition: His height and weight make him obese, according to the CDC’s standard criteria. Results from his April 2020 physical said that Trump, who is 6’3″ and weighs 244 pounds, has a body mass index of 30.5. Obesity triples the risk of hospitalization from Covid-19, the CDC says.

Vice President Mike Pence tested negative for Covid-19 on Friday. Pence would take over for Trump if the president were incapacitated or otherwise unable to perform his duties. Democratic House Speaker Nancy Pelosi—second in the constitutionally prescribed order of succession—also said she tested negative.