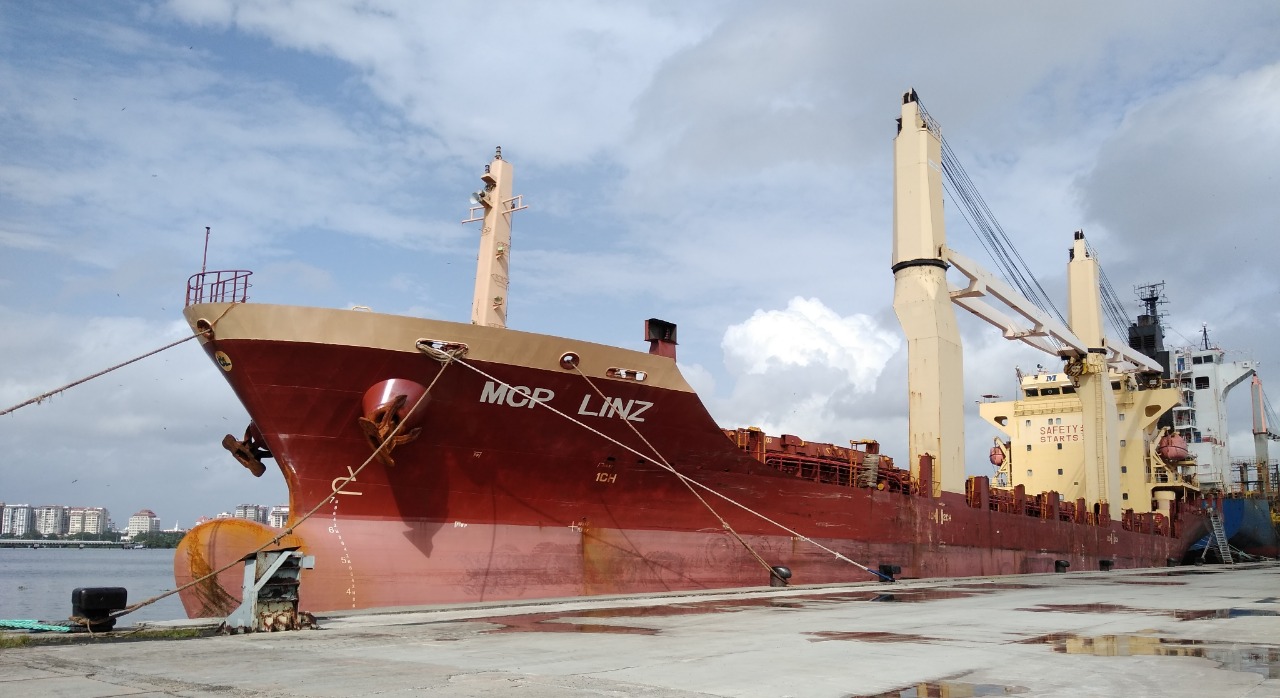 MCP Linz docked at the Cochin port, India, ready to set off for the voyage. (Courtesy: Cochin Port Trust.)

MCP Linz, an Indian cargo ship operated by the Shipping Corporation of India, has completed its maiden journey from Thoothukudi in the southern Indian state of Tamil Nadu to Malé, the capital of the Maldives.

The voyage initiated direct cargo ferry service between the two nations, a new phase in connectivity in the southern Indian Ocean.

Despite a lockdown in the northern Maldives, the cargo was received through virtual meetings by representatives from the Thoothukudi and Kochi ports. Officials from Maldives Ports Ltd. and the Maldives Foreign Ministry were also present.

Trade between India and the Maldives “goes back to time immemorial,” Mohamad Aslam, a member of the Maldives parliament, told Zenger News. “Small wooden boats (kappal) regularly visited the Maldives from India.

The service was launched on Sept. 21 by Mansukh Mandaviya, India’s minister of state for shipping (independent charge), and Aishath Nahula, Maldives minister of transport and civil aviation, through video conferencing. The vessel traveled through Kochi in the southern state of Kerala, and Kulhudhuffushi, an island in the Maldives.

MCP Linz is a combination container ship, which can carry up to 380 TEUs (twenty-foot equivalent unit) and 3,000 MT (metric tons) of bulk cargo. It is expected to make a round trip within 12-14 days. The ship carries general cargo, including building materials and food.

“The Maldives imports a variety of general goods from India, including poultry and agricultural products, textiles, staple foods, medicines, and construction materials. It mainly exports scrap metals,” Aslam said. “New cargoes bring additional advantage to the business on both the sides, scheduled shipping on fixed dates, and low freight.”

He said while most cargo ships are handled by the Malé ports, this new trade route would provide greater opportunities.

“I believe there is a strong potential to expand this service to the southern ports in the Maldives,” he said.

Indian Prime Minister Narendra Modi tweeted, “&mldr; I have no doubt it will promote bilateral trade and boost our economies. The Maldives-India friendship will continue to strengthen.”

During a 2019 visit to the Maldives, Modi announced India’s commitment to start the ferry cargo service, and a memorandum of understanding was signed. The two nations announced the commencement of the service during a virtual meeting on Aug. 13.

“The MCP Linz is huge but is affordable and comes at a very low cost for both the countries,” he said.

The ferry service will allow Maldivian exporters of tuna and other marine products to boost their trade and enter European markets.

“It is a very good economic boost for the trading communities that deal in seafood,” Abbas said. ” It is a big success for them and can be seen as a milestone.”