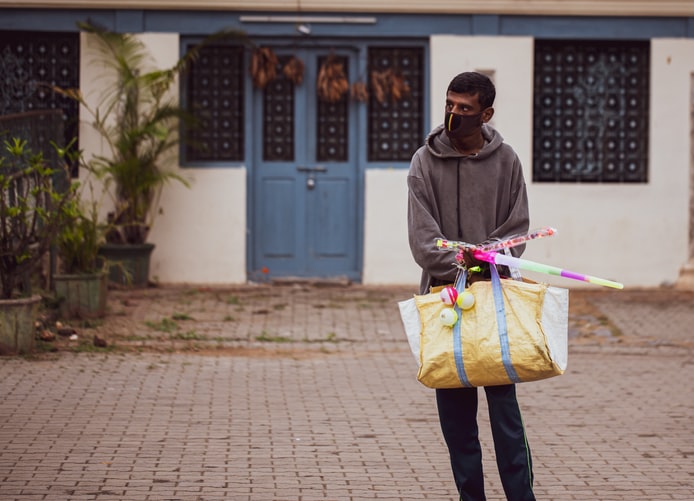 A vendor wearing a mask in Mysuru, India at an unknown date. (Courtesy: Syed Ali/Unsplash.)

While India has responded well in many ways to the coronavirus pandemic, the country’s leaders have perpetuated false optimism and unrealistic claims, creating “uncertainty among the public and health-care professionals, discouraging people from taking preventive action or taking public health messages seriously,” a recent editorial in the medical journal Lancet states.

“Hope is important, and recognizing successes is vital, especially during a pandemic. But presenting the current situation in India with a too positive spin not only clouds reality but also hampers vital public health initiatives,” the Lancet states in the editorial published on Sept. 26.

“The epidemic in India is far from over, with a potentially huge burden of mortality and morbidity to come unless public health measures are used and adhered to,” the editorial states. “Without clear and honest communication of the risks of Covid-19 to the population, stemming the epidemic will be impossible.”

“The Lancet editorial was a fair assessment, and I think a foreign medical journal will not be hypercritical in making such assessment,” said Dr. T. Jacob John, a prominent virologist in India. “The editorial also states that if negative observations are suppressed, there will be a bias in reporting.”

The editorial notes that the country responded well in many regards and initiated a national lockdown, which was praised by the World Health Organization, but that difficulties remain.

“The lockdown created a parallel crisis for many people as income fell dramatically, hunger increased, and many migrant workers walked long distances home,” the editorial states. “India’s GDP was already decreasing before Covid-19 but the contraction of almost 25 percent year-on-year in the quarter April to June could make India one of the worst affected countries economically.”

John believes the drastic downturn in the economy was avoidable. “The expertise available to the government in India was not good enough, and there was also a misunderstanding that Covid-19 may not hit the country so hard. Yet the lockdown was harsh and mistimed and India was late in introducing mask-wearing, which could have reduced the speed of spread.”

India has now crossed the 6 million mark in Covid-19 cases and has recorded more than 98,000 deaths. India is second only to the United States in the number of Covid-19 deaths and cases.

Prime Minister Narenda Modi, in a virtual meeting about the coronavirus with his chief ministers on Sept. 23, said that while it’s “true that there has been a steady increase in the infection cases in India &mldr; today, we are conducting more than 10 lakh tests and the number of people recovering is also increasing rapidly. Best practices are being witnessed in many states and at local levels in states. We will have to promote these experiences more.

“On the one hand,” Modi said, “while we have to further strengthen the infrastructure related to Corona, we also have to improve the network of tracking and tracing and ensure better training.”

Referring to the Lancet editorial, Soumitra Ghosh, an assistant professor at the Centre for Health Policy, Planning and Management at the Tata Institute of Social Sciences in Mumbai, said the article is “sort of a recognition of the already established fact (supported by the numbers) that the central government has not just failed to manage the pandemic and the economy, it also resorted to a misinformation campaign which is deepening the crisis and thus, endangering the lives of millions of people.

“I think it speaks volumes about the union government’s response to the Covid-19 pandemic when a prestigious journal like Lancet had to take note of the grave situation prevailing in India and forewarn the government about the dangers beneath such unscientific approaches,” Ghosh said.

The editorial states that in the hours before announcing the national lockdown, Modi “told owners and editors from India’s largest media organizations that it was important to tackle the spread of pessimism, negativity, and rumor.

“This pressure to avoid negative news, and to offer reassurance, appears to have been felt by several professional scientific organizations in India.The Indian Council of Medical Research (ICMR) has been “singled out by experts for straying from scientific evidence, appearing at worst politically motivated and at best overly optimistic,” the editorial states.

“A letter from the director general of the ICMR, Balram Bhargava, said that the ICMR envisaged launching a coronavirus vaccine on Aug. 15 (Indian Independence Day — a deadline considered unrealistic by most medical experts); ICMR has supported treatment with hydroxychloroquine despite insufficient evidence; and news reports claim that data on coronavirus infection were removed from a scientific paper.”

Dr. Bhargava told Zenger News that “ICMR is fully aware of its high credibility among the scientific communities, both nationally and internationally, and its responsibilities to the people of India as well as the global communities, and would not jeopardize that under any circumstances.”

“Regarding a Covid-19 vaccine, the Aug. 15 deadline was for the launch of the ‘clinical trial’ and not the ‘clinical use,’ which was clarified later on,” Bhargava said in an email response. He said that the ICMR did support the use of hydroxychloroquine with adequate precautionary measures for Covid-19 prophylaxis of health care workers based on the data available from Indian hospitals and anecdotal reports from the across the world. “ICMR study also highlighted that HCQ only worked if taken weekly for six weeks at a stretch after a loading dose, at the least, along with the standard physical prophylactic measures, especially the use of masks.”

The editorial also raised the issue of transparency of data, especially regarding the fatality rate of the coronavirus in India.

“The Indian government reports a case fatality rate of 1.8 percent, much lower than the reported rate in other countries, but it is difficult to know if the numbers are comparable,” the editorial states.

“There is massive underreporting of cases and the number of infections is much higher in the community,” said health care activist Dr. Abhijit More. “The deaths are also being underreported, as many deaths in the community go unreported. The death certificates often attribute the cause of death without taking note that the contributing factor was Covid-19.”

Bhargava said that the scientific and public health communities walk a fine line while communicating to the public during any pandemic.

“This is fraught with generating false hope on one hand and fear and despair on the other,” he said. “Compared to other countries, people’s reaction to the pandemic has remained quite balanced and positive in India, and ICMR believes it has done its duties very responsibly.”