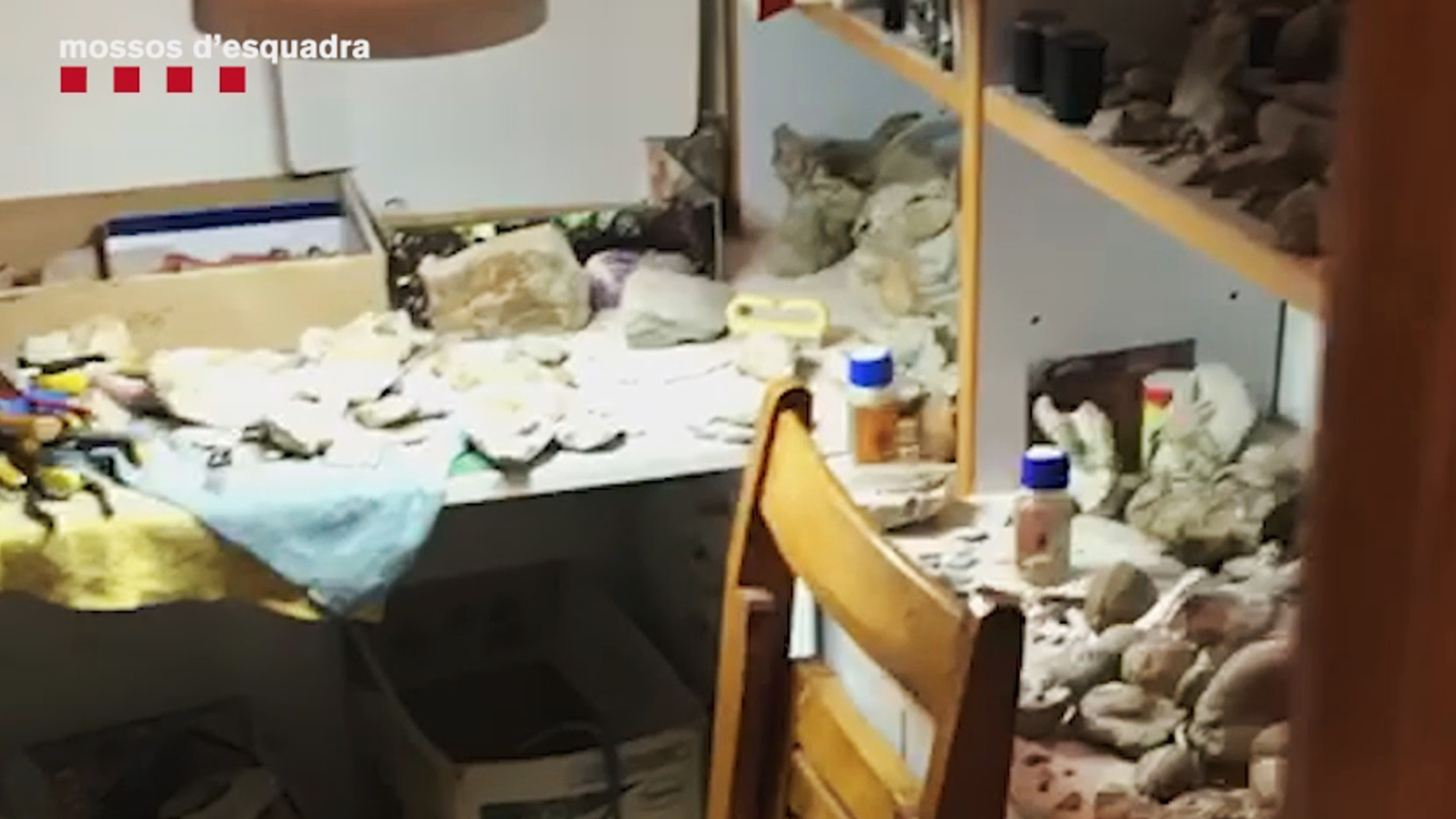 Paleontological remains allegedly looted from various sites over the last 25 years seized by local police in the north-eastern Spanish province of Barcelona on an unknown date. (@mossos/Newsflash)

A 70-year-old fossil hunter who amassed more than 8,000 valuable prehistoric remains could face jail time after police seized his collection.

The Mossos d’Esquadra (Catalan police) said in a press statement on Saturday that 8,244 paleontological artifacts, which are between 35 million and 45 million years old, were found at the unidentified man’s house after being removed from various archaeological sites in the Spanish provinces of Barcelona, Lleida and Huesca in the region of Catalonia.

An investigation into the suspect — known locally as “el senyor dels crancs” or “the lord of the crabs” because most fossils found in his possession featured different species of prehistoric crab — began after reports that the site of Clot Sant Roma de Bellprat, a submerged church discovered in 2016, was being looted by visitors and collectors. On March 9, 2019, police said they found the man with 18 fossil fragments on his person at the site.

In early May 2019, officers raided the suspect’s home in the town of Igualada and found a trove of fossils, maps, documents and photos of several previously plundered sites in Barcelona, Lleida and Huesca. The stolen artifacts amount to more than $164,000 in value, according to the Catalan culture department, which is currently holding the remains because they are considered public heritage.

While the elderly fossil hunter is still waiting to be formally charged, extractions that lead to the loss of information or damage to sites are crimes that can be punishable by three years in prison. Meanwhile, he has been banned from visiting the sites where he is accused of stealing the artifacts, including Sant Roma de Bellprat, La Pobla de Claramunt, Coll de Nargo, Villaseca de Seros, and La Pobla de Segur.

The private ownership of fossils became a subject of international conversation this week after natural historian David Attenborough gave the United Kingdom’s Prince George a fossilized tooth from a giant shark (Carcharocles megalodon) that is 23 million years old. The move initially sparked demands that it be returned to Malta, where it was found on the beach. While the Maltese later said the future British king can keep the tooth, the fossil hunter in Spain may not be so lucky.