Paleontologists want to learn about how dinosaurs parented their offspring; this find could provide some answers. 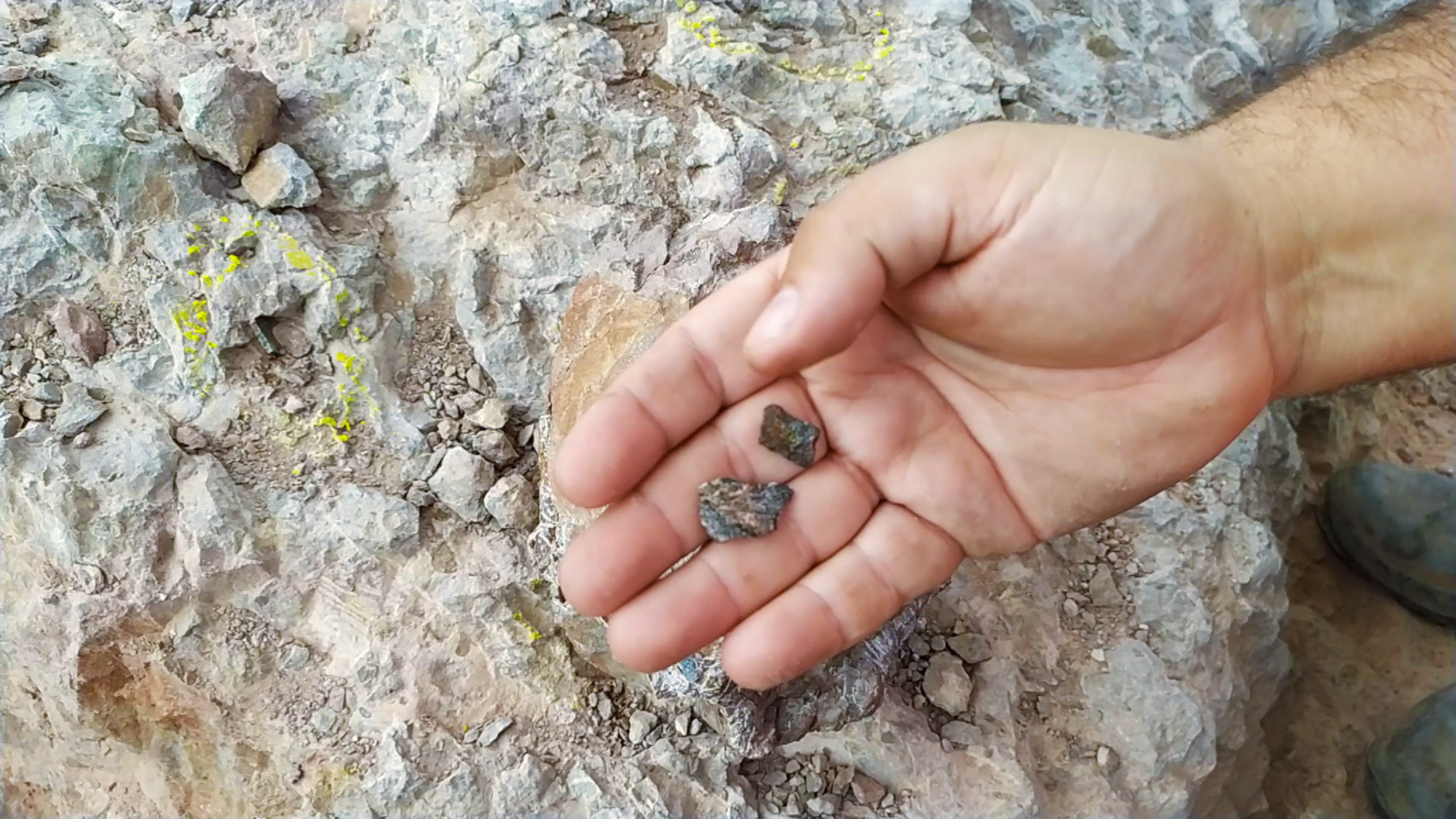 One of the dinosaur eggs found in the excavating site in the municipality of Loarre in the province of Huesca in northern Spain. (C. Nunez Lahuerta-FCT-NOVA-Unizar/Clipzilla)

HUESCA PROVINCE, Spain — A freelance paleontologist’s chance discovery of dinosaur eggshells in the Spanish Pyrenees has turned out to be the biggest-ever European archaeological find from dinosaurs that lived 68 million years ago.

So far the archaeological team working at the site has found 25 fossilized dinosaur eggs, but researchers expect to recover more than 100 before wrapping up the search in three weeks time, the lead researcher told Zenger News in an interview. The site of the find is in the Aragon region of the northern Spanish province of Huesca.

The eggs, which measure about 20 centimeters (7.87 inches) in diameter, are in an excellent state of preservation. The paleontologists hope to find embryos inside that can help them solve some unanswered questions about the dinosaurs that inhabited this part of Europe, including how they cared for their offspring.

Preliminary analysis indicate the eggs belonged to the titanosaurus sauropodous species, a long-necked herbivorous dinosaur that could grow to about 20 meters (65 feet) in height, Miguel Moreno-Azanza, paleontologist and leader of the excavation team, told Zenger. 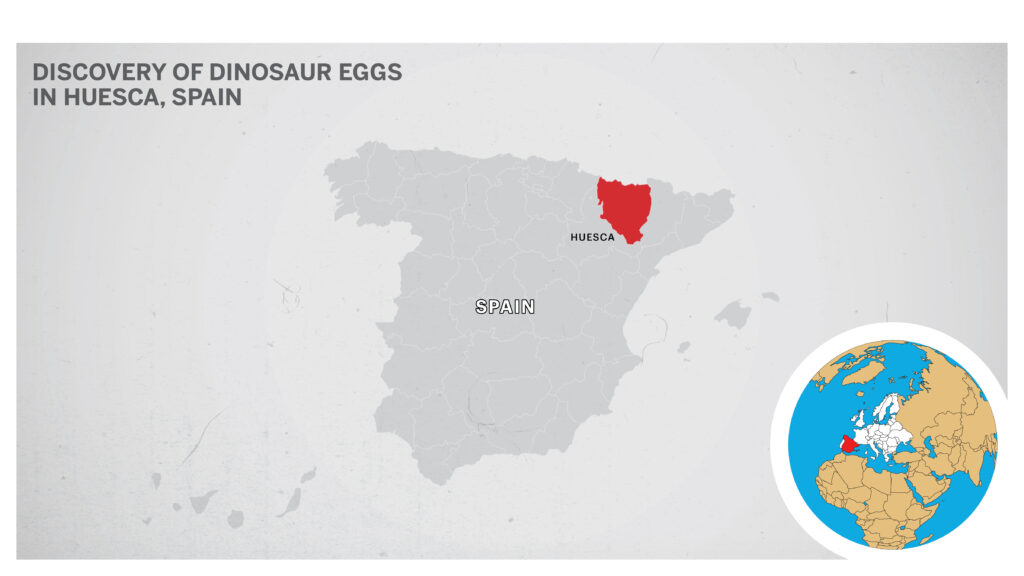 “We are still not entirely sure about the species—it could be one of five different species. We need to find embryos to be certain,” said Moreno-Azanza, who leads a team consisting of Spanish and Portuguese experts from the University of Zaragoza in Spain and Nova University in Lisbon, Portugal. For now the team is focusing on locating the eggs; more detailed examinations will follow later.

The dinosaur nest site was found by chance in late 2019 by Jose Manuel Gasca, a freelance paleontologist and trail-running fanatic. During a training session in the mountains with his running club, Gasca spied eyed something that looked suspiciously like fossilized remains.

“I was crossing through an area with a kind of red-colored sediments that are favorable to contain dinosaur remains. I looked more closely to see if there was a fossil and identified some very big fragments of egg shells. I jotted down the coordinates and contacted Moreno-Azanza, with whom I have worked together in the past. We decided it was worth a closer inspection as it indeed could be a dinosaur eggs site,” Gasca told Zenger News.

The area is crisscrossed by hiking trails and quite popular among hikers and trail runners, but “nobody had ever combed through it with the eyes of a paleontologist,” Gasca said.

Due to restrictions related to the coronavirus pandemic, more than eight months would pass from the initial discovery until the excavation efforts could begin, in mid-August. To Moreno-Azanza, the discovery has been a childhood dream come true, literally. He grew up in a town about 20 kilometers (12 miles) from the archaeological site.

“I remember camping here when I was a child, maybe a kilometer (0.62 miles) from here. I was playing here with my plastic dinosaurs, fantasizing about finding something like this,” he said. As an adult, Moreno-Azanza has traveled all over the world as a paleontologist, to Argentina, China and Australia, among others, to excavate and examine dinosaur eggs. That means making such a find so close to home has been a special experience that awoke childhood memories in him.

Moreno-Azanza has been passionate about dinosaurs as far back as he can remember. He got his first plastic dinosaur when he was just 2 years old, and since then dreamed of becoming a paleontologist himself. Back then the main attraction was the mystery and enormous size of the extinct animals, he said. Today, the fascination is a different one.

For Moreno-Azanza, who works in Lisbon, the excavation was also a rare occasion to visit his parents in his childhood home, something he hadn’t been able to do for five months because of Covid-19. More importantly, however, the finding could lead to new discoveries about how dinosaurs bred and lived, he said.

“For the first time, we now have confirmation that dinosaurs actually lived here in this part of the Pyrenees,” Moreno-Azanza said. Secondly, the collection of dinosaur nests could reveal where those creatures preferred to lay their eggs and why. The eggs could also throw new light on whether dinosaurs actually parented their offspring, or left them to hatch and fend for themselves straight out of the eggs. If the team finds far-advanced embryos in the eggs, they will be able to tell whether the bone structure was developed enough to support the babies as soon as the eggs hatched, or whether they would need parental care and feeding.

“To find this out, we need to find embryos that died just before the eggs were supposed to hatch,” he explained. With dinosaurs of this kind, the eggs would usually hatch after some 200 days, and with a find of this magnitude, the chances are very good, Moreno-Azanza said.

In the part of Spain and France where the Pyrenees are located today there were once vast green and fertile plains that were inhabited by dinosaurs many million years ago. Later, the tectonic plates underneath this part of Europe collided and pushed the earth crust upwards to create the mountains. The excavation site, in a fairly barren part of the mountains, was once very close to the ocean and 1,300 meters (roughly 4,200 feet) lower than now, Moreno-Azanza explained.

The initial excavation project will last until mid-October, but Moreno-Azanza hopes to be able to return again later to carry out a careful investigation of the surrounding area. The largest collections of dinosaur eggs previously on record have been located in the Atacama desert in Chile, South America. This new discovery is so far the largest in Europe.