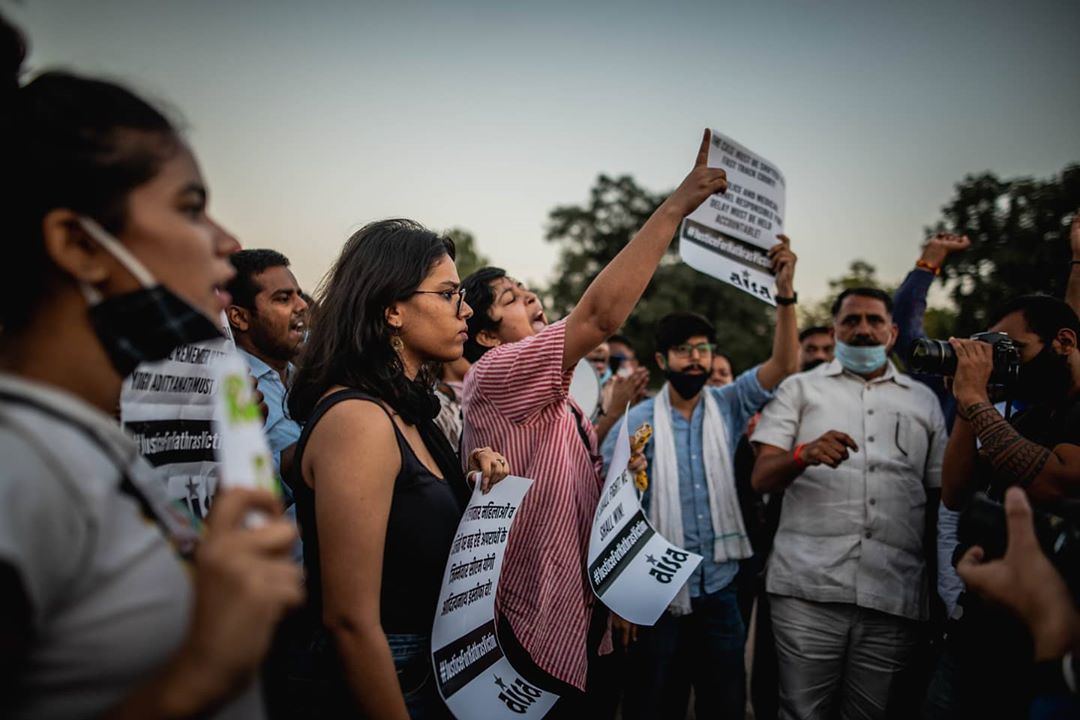 The gang-rape and murder of a 19-year-old Dalit woman, allegedly by four upper-caste men, has sparked outrage in India.

Protests have broken out in different parts of the country, demanding justice for the woman, who was cremated by the police officials in the early hours of Wednesday.

While the woman belonged to the Dalit community, which is placed at the bottom of India’s discriminatory caste system, the four men were from the upper caste Thakur community. The four accused have been arrested.

The incident occurred on Sep 14 in the Hathras district of India’s northern state of Uttar Pradesh (UP). The woman was attacked while she was helping her mother in the fields. Her tongue was reportedly cut, and her spinal cord and neck were grievously wounded in the incident.

Paralysed after the trauma, she died at New Delhi’s Safdarjung Hospital on Sep 29.

Her family said she was “forcibly” cremated by the police officials and other authorities on early Wednesday morning, a little after 3 a.m. This was despite the family’s wish to bring her body home and wait for her close relatives and friends to attend the last rites.

This incident has sparked memories of a similar rape that occurred in India’s capital New Delhi in December 2012. The gang-rape and murder of a 23-year-old paramedic student on a moving bus had sparked nationwide protests and affected a change in the laws dealing with sexual violence in India in March 2013. The four accused of the crime were hanged in March this year.

“This is a complete denial of justice,” said Neeraj Chauhan, the Hathras victim’s cousin. “The police brought the dead body and headed straight to the cremation ground.”

He said it was only after insistence of the family and the villagers that the police brought the body to the house for a few minutes.

A video, being aired on Indian news channels, shows the family members and relatives of the victim trying to stop the ambulance carrying her body from being taken to the funeral ground for cremation. The ambulance is being driven by the police. The video also shows the mother of the victim sitting and crying on the road.

“They cremated her without any family member,” said Sandeep Valmiki, the victim’s younger brother, who was accompanying the dead body.

Amid the outrage, UP Chief Minister (CM) Adityanath said prime minister Narendra Modi has called for the “strictest action against the accused” in the case. He added the trial would be conducted in a fast-track court. He also announced the formation of a special investigation team (SIT) that would probe the crime and submit a report within seven days.

Later in the day, Hans Raj Hans, a member of the Parliament (MP) from Delhi, wrote to Adityanath later in the day. He asked the CM to take strict action against those who had committed this crime as well as the police officials involved in the hurried cremation of the victim. “The police officials must be asked to clarify their reasons for cremating the victim without seeking permission from her parents. If they are found to be guilty in their duties or responsibilities, punitive action must be taken against them,” he wrote in the letter.

Hans is an MP from the Bharatiya Janata Party – the party in power in both UP and India.

While caste-based discrimination has been outlawed in India at least since Independence in 1947, it is rampant. The Dalits are often the victims of violence.

Crimes against women have increased 7.3 percent from 2018 to 2019, while those against the Scheduled Castes or Dalits have gone up 7.3 percent in the same period, according to the annual National Crime Record Bureau’s ‘Crime in India’ 2019 report released on Tuesday.

UP, India’s most populous state, has reported the highest cases in both the categories in terms of absolute numbers. Even at the time of publishing this story, three more cases have been reported from the state – of a 22-year-old Dalit woman who was killed and murdered in Balarampur; a 14-year-old girl who was assaulted in Bulandshahr; and an 8-year-old in Azamgarh.

Many Indians, including the activists and lawyers, took to the social media platforms to express their outrage on the rising number of crimes against women in India “The Hathras gangrape victim passed away,” Kavita Krishnan, an activist and Communist Party of India (Marxist-Leninist) politburo member, tweeted. “Speak about the reality of the assaults on the Dalit women and girls. Connect dots, show a larger picture of structural violence against the Dalits. Don’t isolate, exceptionalise this case as a gruesome aberration.”

Further, the Delhi High Court (HC) Women Lawyers Forum wrote to Sharad Arvind Bobde, the Chief Justice of India, asking him to take cognizance of the case and constituting a high court-monitored investigation.

“So much more could have been done to assist the victim and her family, and its lack cannot be tolerated for any reason. The fundamental and the human rights of the victim should be upheld by one and all,” they wrote.

They also asked the Supreme Court of India to set up adequate institutional mechanisms and guidelines, so that victims or their families should be able to access their legal and fundamental rights.

The opposition leaders have attacked CM Adityanath for the state government’s incapability in handling the case. Congress leader Priyanka Gandhi Vadra has sought his resignation.

“Instead of protecting the victim and her family, your government became complicit in depriving her of every single human right, even in death. You have no moral right to continue as the chief minister,” she tweeted.

“I was on the phone with the Hathras victim’s father, when he was informed his daughter had passed away. I heard him cry out in despair. He had been telling me all he wanted was justice for his child. Last night, he was robbed of the chance to take his daughter home for the last time and perform her last rites,” she wrote on Twitter.

In 2012, when the Nirbhaya incident had happened, the BJP was the major opposition party in the Parliament. It had vocally criticized the then United Progressive Alliance (UPA)-II government for its mishandling of the case, including Narendra Modi. However, the PM, who interacts with the country’ population over social media on a diverse set of topics, has kept mum over this case.

Dr Udit Raj, an erstwhile BJP MP, questioned the PM’s silence and said the suppression of Dalits has increased under the rule of the BJP government. “Whenever the BJP is in government, Dalit oppression increases. Their security, education and employment are also adversely affected,” he said. Raj is the founder and national chairman of the All India Confederation of SC/ST Organizations. Raj, hailing from the Dalit community, had quit the party in 2019, when he was denied a ticket in the 2019 Lok Sabha elections.

He had termed the BJP “anti-Dalit” and help them responsible for finishing the Dalits during their first tenure at the Centre.