Father of 25-year-old suspect says a Muslim must avenge blasphemy. 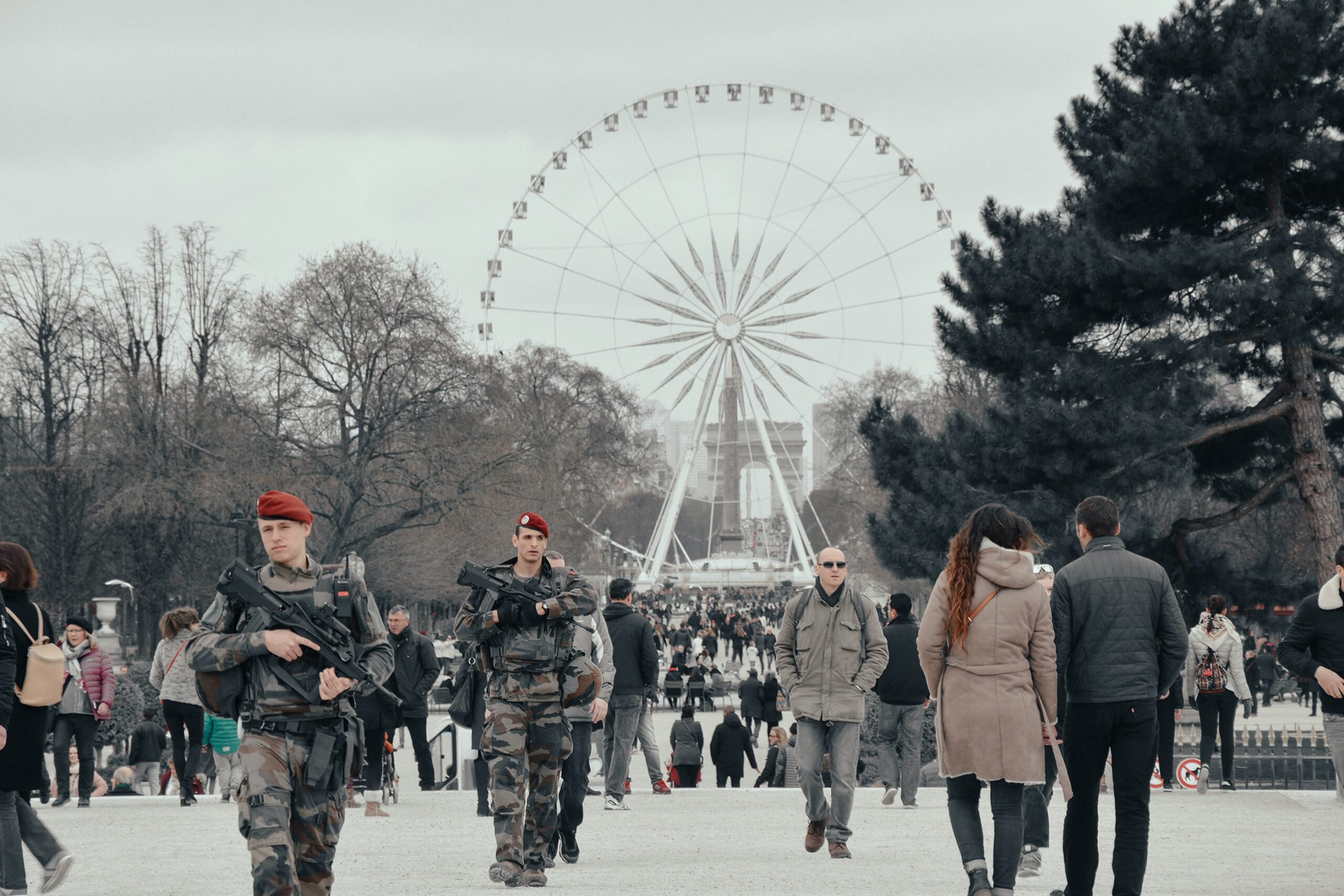 Soldiers at Champs-Elysees in Paris in 2017. (Courtesy: Manu Sanchez/Unsplash).

Zaheer Hassan Mahmood, the 25-year-old charged with attempted terrorist attacks after wounding two people with a meat cleaver outside the former office of Charlie Hebdo in Paris on Sept. 25, is being praised by his Pakistani father for his actions.

The father, Arshad Mahmood, said a Muslim must avenge those who commit blasphemy.

Arshad Mahmood said he spoke to his son three days ago as the internet connection is not very stable in Mandi Bahauddin, his village in Punjab, about 150 miles from Islamabad.

“Hassan did not mention to us anything about what he was thinking and planning,” Arshad Mahmood said. “He has done what every Muslim should have done — avenge blasphemy.”

When asked if he condoned taking the law into his own hands, Arshad Mahmood said, “Are you a Muslim? I mean are you a Sunni Muslim? If you are, then you should not be asking this question.”

He said another of his sons, a 16-year-old, has also been arrested by French authorities.

“Hassan went to France a few years back, while my other son went there recently. I request the government to make efforts for the repatriation of Hassan, as he has done nothing wrong,” the father said.

In January 2015, 17 people died after an attack at the office of Charlie Hebdo. The attack came after the satirical newspaper had published cartoons that allegedly defamed Prophet Muhammad. The newspaper republished the cartoons in early September this year, on the opening day of the trial of the 14 people suspected of being accomplices in the 2015 attack.

French authorities have said Zaheer Hassan Mahmood is a Pakistani who arrived in France three years ago as an unaccompanied minor. He was briefly arrested several months ago under a different name — the one he used when entering the country, falsely stating that he was 18 — for carrying a prohibited weapon.

“Hassan went to France a few years back, while my other son went there recently. I request the government to make efforts for the repatriation of Hassan, as he has done nothing wrong,” the father said.

Gérald Darmanin, France’s interior minister, said the attack was “clearly an act of Islamist terrorism” and anti-terror prosecutors have opened an investigation.

In a video, the suspect identifies himself as Zaheer Hassan Mahmood [also spelled Mehmood] and says he came from Mandi Bahauddin in the Punjab province. Starting to sob, he recites poetry, praising the Prophet Mohammad.

He further says he was attacking Charlie Hebdo for printing the cartoons mocking the prophet.

“If I’m sounding emotional, let me explain: Here, in France, the caricatures of Prophet Mohammad were made,” he said in Urdu, in the video on Twitter. “I am going to do (an act of) resistance today.”

In an interview with YouTube channel Naya Pakistan, Arshad Mahmood said his son Hassan told his friend the night before the attack that the “prophet has chosen [him] to kill these blasphemers.”

The interviewer and owner of the channel, Husnain Rafiq, praises Hassan and congratulates his father for the act his son committed. Naya Pakistan, which was launched three years ago, has 1.53 million subscribers.

Journalist Zaheer Babar of Independent Urdu said Rafiq should not be blamed, as he was catering to his subscribers.

“In Pakistan, the journalists in the main cities are given training and have some editorial checks and balances. If you go to smaller cities, you will be lucky if you find journalists who have had proper training or have studied journalism.”

The re-publication of the caricatures fueled anger in some Muslim countries around the world. There were rallies in Pakistan to condemn Charlie Hebdo.  Al Qaeda in Yemen, which claimed responsibility for the 2015 attack, renewed its threat against the publication.

Farzana Bari, a human rights activist, told Zenger News, this was the result of extreme positions taken by the religious clerics in Pakistan.

“Hundreds of thousands of Muslims are residing in France, yet &mldr; a Pakistani young man had to avenge,” she said. “This shows the level of indoctrination in our society.”

She said Pakistan is still reeling from the killing of a U.S. citizen accused of blasphemy in a crowded courtroom in Peshawar in July, and that the most recent attack would increase international pressure on Pakistan.