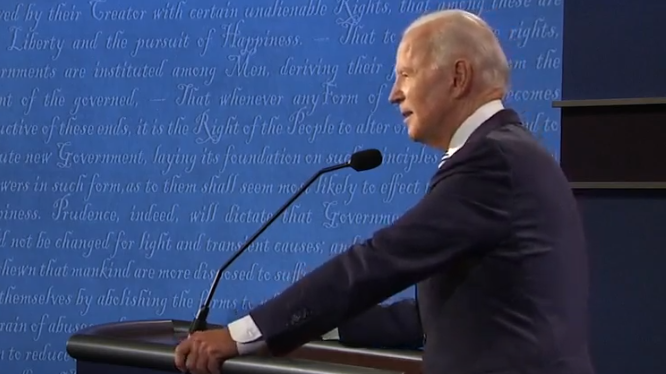 Trump claimed the mantle of “law and order” as soon as moderator Chris Wallace segued into a set of questions about race relations and criminal justice, challenging Biden on how he has responded to a summer of racial unrest.

“The people of this country want and demand law and order and you’re scared to even say it,” Trump said, criticizing Biden’s unwillingness to challenge Democratic-led cities including Chicago and Portland for their patient approaches to protests that turned violent.

Wallace failed for 90 minutes to leash Biden and Trump, losing battle after battle to more and more interruptions.

The presidential race simmered on the back burner of a summer of violent protests over race relations, touched off by the death of Minneapolis resident George Floyd, who was black, while in police custody on May 25.

The demonstrations continued throughout the summer and into fall, revived again in September when a Kentucky grand jury declined to indict three police officers for killing Louisville, Kentucky resident Breonna Taylor. Police forcibly entered her home with a search warrant and fired their weapons.

One officer was charged with three counts of wanton endangerment for blindly shooting into Taylor’s apartment. The city of Louisville settled a lawsuit with Taylor’s family for $12 million.

Trump sidestepped Wallace’s challenge to condemn all white supremacists and militia groups on Tuesday, evading the moderator’s question and instead condemning left-wing protesters who organize under the name “Antifa.”

“I would say almost everything I see is from the left wing, not the right wing,” Trump said. “I’m willing to do anything. I want to see peace.”

Pressed about a right-wing group called the Proud Boys, he said: “Stand back, stand by, but I’ll tell you what, somebody’s got to do something about Antifa and the left because this is not right-wing problem,” he said. “This is a left-wing problem.”

Wallace asked Trump why he had banned, by executive order, all racial sensitivity training in federal government facilities.

The president characterized the training as “radical” and said participants were exposed to “very sick ideas, and really they were teaching people to hate our country.”

“No one is doing that,” Biden said quickly. “He’s the racist. His friends look down on so many people.”

“There is nothing we cannot do if we do it together,” said Biden. “We can take this on and we can defeat racism.”

Claiming his support among black voters is high for a Republican, Trump boasted about his success with the First Step Act, a law that led to freeing thousands of nonviolent drug offenders serving long prison sentences.

Alice Johnson, a woman released because of the law’s changes inside the Department of Justice, flew on Air Force One to Cleveland with Trump and his aides. Johnson has publicly thanked the president many times. He didn’t mention her Tuesday night.

Trump also took aim at Biden’s sponsorship of a crime bill in 1994, which led to tougher criminal penalties and an increase in incarceration rates, especially among black men.

“You call them ‘superpredators,’ and I’m letting people out of jail now,” he said.

The heated 90-minute debate was the first in a series of three, including one on Oct. 15 in Miami, Florida, and another in Nashville, Tennessee on Oct. 22.