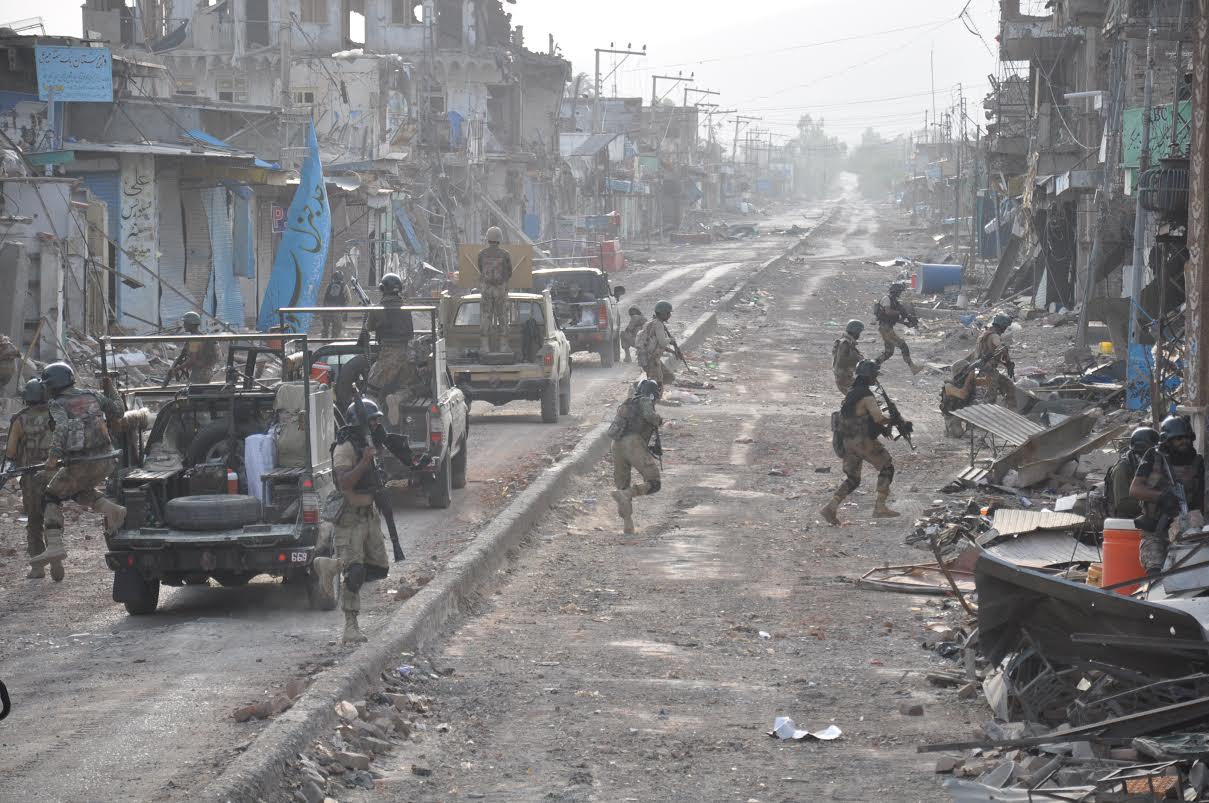 Pakistani soldiers in a clearance operation in Mirali, North Waziristan, on an unknown date. (Courtesy ISPR)

Attacks on military convoys in Pakistan’s tribal areas have increased in recent months as three main breakaway factions and other, smaller groups have reemerged under the banned militant group Tehreek-i-Taliban Pakistan (TTP).

Observers say the militant groups realized that factionalism was affecting their operational strength. Pakistani Taliban groups are trying to resolve their internal differences and reunify.

Factionalism is common among militant organizations, and most of them eventually reunite, as happened with the TTP, which has brought some of these groups back under its umbrella.

The Jamaat-ul-Ahrar, the Hizb ul-Ahrar, and Hakeemullah Mehsud were the three major factions in the TTP until they splintered in 2014 over leadership issues. It was announced last month that they were reuniting under TTP.

The banned sectarian group, Lashkar-e-Jhangvi, which mainly operates in the western province of Balochistan has also joined the TTP.

The TTP, as a strong ally of al-Qaeda, became an umbrella organization for militant groups after its formation in December 2007 and has been involved in numerous terror attacks. It started from Pakistan’s northwestern Khyber Pakhtunkhwa province and in semiautonomous tribal areas bordering Afghanistan, and expanded to other parts of the country.

Pakistan’s military launched a massive operation in June 2014, which resulted in the decimation of the group, whose members took sanctuary across the border in Afghanistan.

The merger of the four groups suggests that the TTP survived the military operation.

“They are telling people to stay away from acts which are sinful,” he said. “Just a few months back, many people came to south Waziristan and enjoyed a peaceful environment. However, with recent attacks on the military convoys, a number of families have relocated their families from south Waziristan to safer areas.”

TTP chief Wali Mehsud is said to have negotiated the reunification, which observers say will strengthen the group by bringing most of the Pakistani militants hiding in Afghanistan under its umbrella.

A recent report by the UN Analytical Support and Sanctions Monitoring Team estimates that over 6,000 TTP militants are hiding in Afghanistan. If the militant group succeeds in bringing back all of the breakaway factions, its strength may exceed 10,000.

The report also estimates that there are approximately 2,200 members of IS Khorasan in eastern Afghanistan. But due to different sectarian and ideological leanings, reunification of the TTP and IS-K is seen as very unlikely.

The report estimates that Al Qaeda in the Indian Subcontinent (AQIS) is also active in the region, with 150 to 200 members.

These groups can maximize the impact of terrorism in Pakistan but do have the same strength and operational capabilities they had a decade ago in the erstwhile tribal areas of Khyber Pakhtunkhwa.

“The operations of the Pakistani army did not eliminate the militants but made them run and leave the country and take shelter in Afghanistan,” said analyst Imtiaz Gul.

“Tehreek-i-Taliban Pakistan is not a militant group but proxy terrorists,” said Gul, executive director of Pakistan’s Center for Research and Security Studies. “They are once again being used by some countries. Until the ties with Afghanistan are normalized, we shall keep seeing these proxy terrorists in action.”

He said the groups are not going to have a major impact on the security situation of the country, but isolated incidents will continue.

“Pakistan’s success was that it managed to drive them out,” he said. “The military operation disrupted their operational capabilities. But these attacks will continue unless Pakistan-Afghanistan relations get better.”

The merging of the banned sectarian outfit Lashkar-e-Jhangvi with the TTP could pose a major threat of sectarian violence in the country, especially in the western province of Balochistan.

Analyst Amir Rana said the swiftness of the TTP’s reunification has surprised many.

“The splinters of TTP recognized that they would not be viable in Afghanistan after the peace deal between the U.S. and Afghan Taliban,” he told Zenger News. “To meet its commitment to stop harboring foreign militants, the TTP groups would not be able to take shelter in Afghanistan.

“The threat to its survival is a changing Afghanistan, and then quite possibly pressures from the Afghan Taliban may have a significant role behind this reunification.”