"Will he just shush for a minute?" "Keep yapping, man." "It's hard to get a word in with this clown." Welcome to the 2020 debates.
By Caitlin Yilek September 29, 2020
Facebook
Twitter
Linkedin
Email 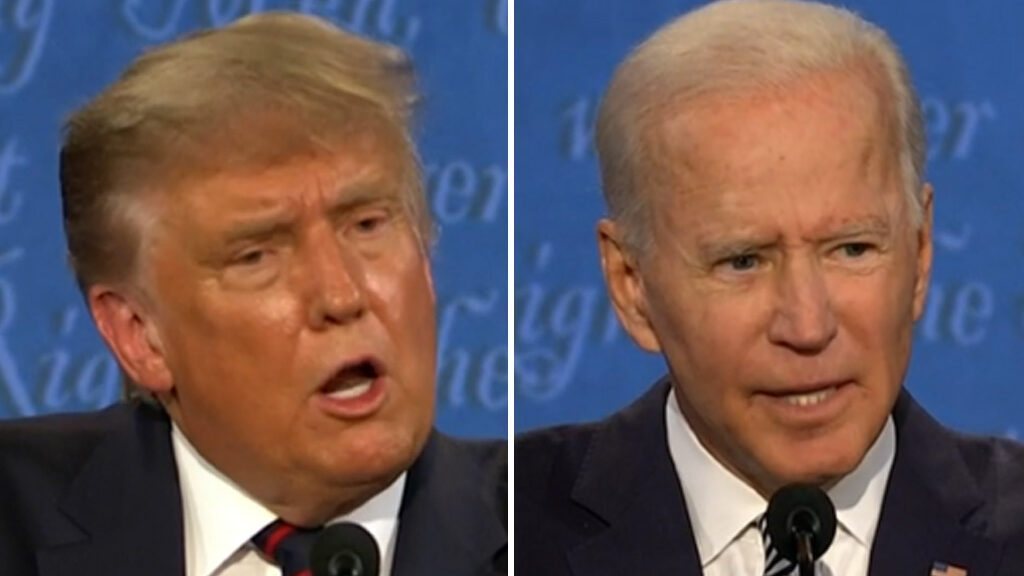 Moderator Chris Wallace, used to the calm of Sunday morning Fox News interviews, grew frustrated with interruptions and digressions. He upbraided the president for ignoring the debate rules his campaign agreed to.

“If you want to switch seats,” Wallace said, cut off again by two booming voices on stage.

Wallace prodded and led the two political titans through a range of topics, among them the Supreme Court, race riots, the U.S. economy, health care, environmental science and the Covid-19 pandemic.

“China ate your lunch, Joe,” Trump said, saying his opponent would have knuckled under to Beijing instead of blocking travel between the U.S. and China after the pandemic first asserted itself.

“Will you shut up, man? This is so unpresidential,” Biden said as Trump interrupted him later, one of more than two dozen moments more suited to the UFC than the USA.

In moments of substance Biden blasted Trump for presiding over an economy in tatters because of the Covid-19 pandemic, saying he could have saved the U.S. economy by acting sooner.

“We handed him a booming economy. He blew it!” Biden said.

Predicting more bad news to come, the former VP said: “A lot of people died and a lot more are going to die unless he gets a lot smarter, a lot quicker.”

Trump claimed a Biden-run White House would have presided over more than 2 million Covid-19 casualties, a ten-fold increase.

“Joe, you could never have done the job we’ve done. You don’t have it in your blood,” he said.

“Why are you holding big rallies?” moderator Chris Wallace asked him, hinting at the public health risk from cramming thousands of people together in basketball arenas and airport hangars.

“Because people want to hear what I have to say,” said Trump.

“Are you not worried about spreading the virus?” Wallace asked.

“So far, we have had no problem whatsoever,” Trump said. “It’s outside that’s a big difference, according to the experts, and we do them outside. We have tremendous crowds.”

Trump sidestepped Wallace’s challenge to condemn all white supremacists and militia groups on Tuesday, evading the moderator’s question and instead condemning left-wing protesters who organize under the name “Antifa.”

“I would say almost everything I see is from the left wing, not the right wing,” Trump said. “I’m willing to do anything. I want to see peace.”

Pressed about a right-wing group called the Proud Boys, he said: “Stand back, stand by, but I’ll tell you what, somebody’s got to do something about Antifa and the left because this is not right-wing problem,” he said. “This is a left-wing problem.”

The president criticized the dramatic expansion of vote-by-mail policies, expressing doubts about Americans who drop ballots at collection centers or allow third-parties to “harvest” ballots in large numbers. They avoiding large crowds and Covid-19 worries, but Trump said they also open the door to fraud.

Ballots are “being sold. They’re being dumped in rivers,” Trump said. “This is a horrible thing for our country. This is not going to end well.”

Biden pushed back, saying election fraud via mail-in voting has not been documented, and pointing to five states—two of which have Republican governors—where widespread voting by mail has been the norm for several election cycles.

‘This is all about trying to dissuade people from voting because he’s trying to scare people into thinking that this isn’t legitimate,” Biden said.

The Supreme Court was in focus early Tuesday night because Trump made his third nomination to the high court less than a week ago. Biden said no high-court vacancies should be filled before the next inauguration.

“We won the election. Elections have consequences. We have the Senate, we have the White House and we have a phenomenal nominee, respected by all,” Trump said of Judge Amy Coney Barrett and his desire to put a third justice on the high court in as many years.

Biden insisted American voters “have a right to have a say” in lifetime appointments to the nation’s highest judicial body, calling for the decision to go to November’s victor.

“The people already had their say,” Trump said, pointing to the 2016 election.

Republicans are moving quickly to confirm Barrett. Justice Ruth Bader Ginsburg died Sept. 18 from metastatic pancreatic cancer at the age of 87. The White House officially sent Barrett’s nomination to the Senate hours before the debate.

Barrett’s potential confirmation would mean conservatives hold a 6-3 majority. She met with Republican senators on Capitol Hill on Tuesday; Democrats have warned that she could usher in a reversal of the landmark Roe v. Wade decision that legalized abortion, and the Affordable Care Act.

Biden has urged Senate Republicans not to move forward with confirming Ginsburg’s replacement before the election.

“If Donald Trump wins the election, then the Senate should move on his selection and weigh the nominee he chooses fairly,” Biden said in a Sept. 20 speech at the National Constitution Center in Philadelphia. “But if I win this election, President Trump’s nominee should be withdrawn and I should be the one who nominates Justice Ginsburg’s successor.”

Biden has not released a list ofhis own potential Supreme Court nominees, as Trump did during the 2016 election and again in both 2017 and 2020.

Democrats have accused Republicans of hypocrisy for moving forward with Barrett’s nomination. Senate Majority Leader Mitch McConnell, a Republican, refused to schedule hearings for Merrrick Garland, who was to be President Barack Obama’s third justice, following the death of Justice Antonin Scalia during Obama’s final year in office.

McConnell has said the situation is different this time, since the same political party holds both the Senate and the White House.

There have been growing calls among Democrats for Biden to enlarge the court if he defeats Trump and Barrett is confirmed, in order to create a new liberal majority. Biden so far has not supported the idea.

The debate in Cleveland, Ohio, was the first of three showdowns between Trump and Biden before Election Day. The audience was limited, compared with past presidential debates, because of public health precautions related to the coronavirus pandemic.

Trump and Biden will meet again Oct. 15 and Oct. 22 for their final two debates in Miami, Florida, and Nashville, Tennessee. Vice President Mike Pence and Sen. Kamala Harris will face off Oct. 7 in Salt Lake City, Utah, for the only vice presidential debate.