Elephants Are An Integral Part of South India’s Navaratri Festivities

Once a part of the natural ecosystem, elephants are today procured through agents and middlemen.
By Sree Veena Mani September 27, 2020
Facebook
Twitter
Linkedin
Email 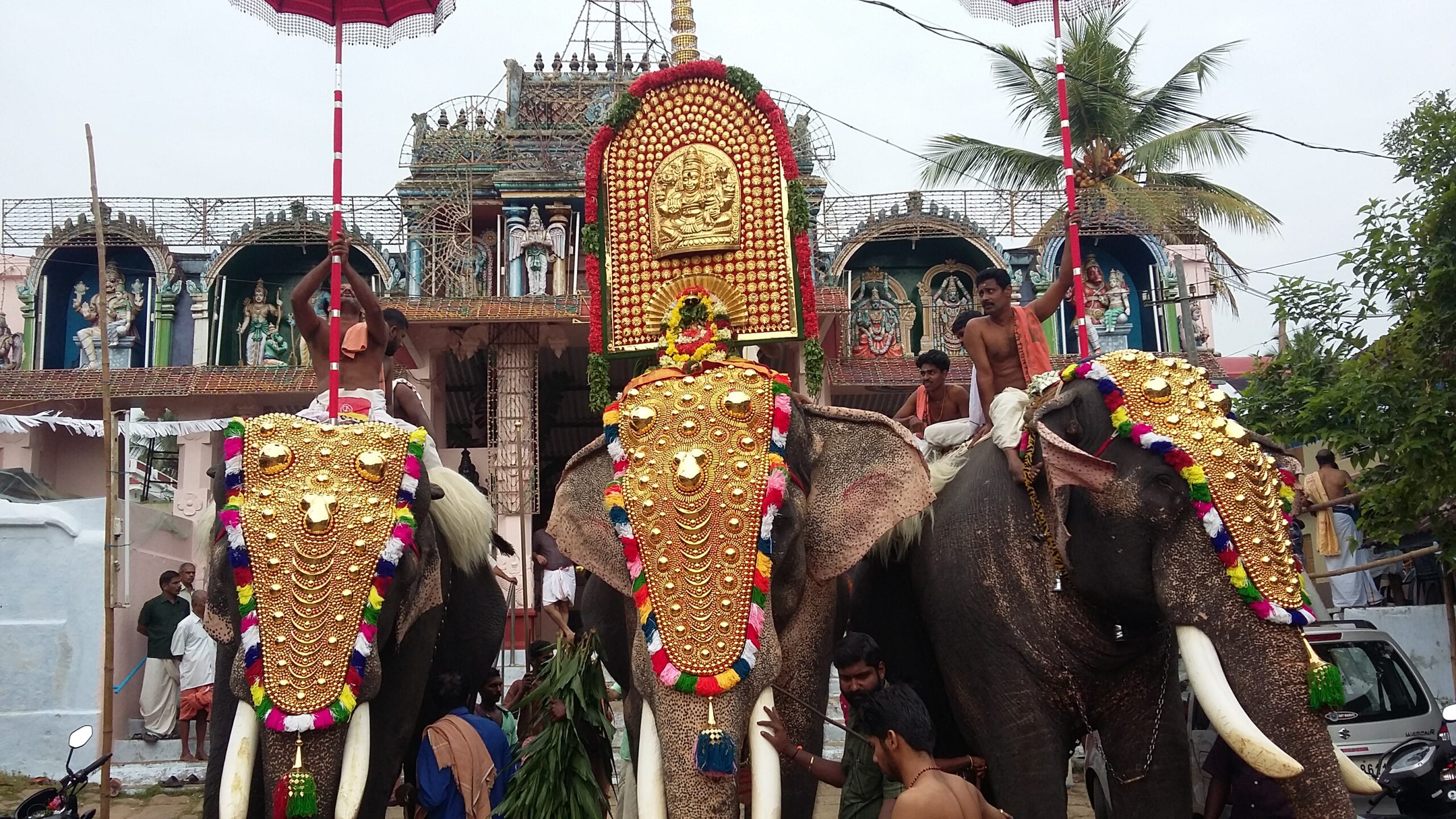 Elephants ready for a procession of the village in Vadakanchery, Kerala. Photo: Sivaraman Iyer

The multiculturalism and vibrancy of India are usually expressed through its festivals. The country is known for its fervor and gusto when it comes to celebrating these festivities.

Navaratri — one of the major festivals to be celebrated in India — spans across nine days and is dedicated to goddess Durga and her triumph over evil. Different states follow disparate cultural traditions during Navaratri. While Gujarat is famous for its Garba dance, Delhi witnesses scores of people queuing up overnight at temples to the mother goddess.

The southern states of Kerala and Karnataka have a special element to their festivities — elephants. The celebrations of the Tamil-speaking people in a Malayali-majority Kerala, from the Palakkad district, usually stands out. The gentle giants, dressed in a golden head covering, are a part of the temple processions at all the villages in Palakkad.

Laxmi Narayanan, a native of Vadakkanchery village in the Palakkad district, said that earlier the elephants were brought from the local forests, but there are agents today to supply these elephants for the festivals.

“Nowadays, there is a middle man. Earlier, the kings would go out hunting, bring home some elephants and domesticate them,” said Narayanan.

He adds the village would take the elephants from the families domesticating them.

“Traditionally, an elderly person from the village would write to people from other villages, who had elephants. Then, few people would go and pick up the elephants, after the monetary terms were discussed,” said Sivaraman Iyer, a native of Vadakkanchery, whose family was once involved in the process of getting the elephants for their Navaratri festivities.

Now, the elephants cost up to a few million rupees, said Iyer. At one point, the cost of an elephant was around Rs 10 or less than a dollar.

In the last three decades, the elephants were brought from Sonepur, a city in India’s eastern state of Bihar. While those elephants were not the first preference, the government ban on capturing the elephants from the forests in the Western Ghats of India left them with no choice.

These elephants are trained to be a part of the temple processions in Kerala. With these elephants, comes a Hindi-speaking mahout — a person who works with the elephant. The mahout stays till the elephant begins to follow Malayalam.

“In the 1980s, we started bringing the elephants from Bihar. They might have been from Assam, but we called them Bihar elephants,” said Iyer.

Nishant Srinivasaiah, a researcher on elephants, said the elephants and mahout could take about five years, in some cases, to adjust to each other and get into a routine.

To ensure the elephants are not ill-treated during these festivals, the Kerala government has issued notifications. An elephant cannot work for more than eight hours in a day, according to the rules.

The organizers of these festivals need to ensure the elephants are given water after three hours of work, rest after five hours of work and 12 hours of rest every day. The rules also lay down the means of transportation and the type of food for the elephants.

There are about 6000 elephants, according to the forest department’s estimates.

In Karnataka, Kerala’s neighboring state, the most famous Navaratri festival is the Mysuru Dasara festival. The Jumbo Savari or elephant procession is the main attraction for the foreign tourists, who come in large numbers.

Shiva Shankar, a Kannada culture activist, said this tradition is being followed since the reign of Krishnaraja Wadiyar — the19th-century Mysuru king. Usually, 15-20 elephants are part of the procession. Due to COVID-19, only five elephants will be brought for the procession.

An idol of goddess Chamundeshwari (a form of the mother goddess) is placed on the lead elephant during the procession.

“When Mysuru was ruled by the kings, the elephants came from the royal family. Now, we get it from the Nagarhole National Park”, said Shankar. He further explained a golden Howdah — the structure on which the idol of goddess Chamundeshwari is kept — weighs 0.8 tons (750 kg), and is made of gold.

Srinivasaiah said the elephants have to undergo special training because the environment is different from the forests. He stressed the elephants follow a routine. “I have seen cases where the mahout was supposed to give two pieces of jaggery but gave only one. The elephant did not budge till he got the second piece.”

Some elephants, that were part of the Dasara celebrations in Mysuru, were caught by trapping using Kheddas or a ditch during the British rule in India. Kheddas were done till the 1970s.