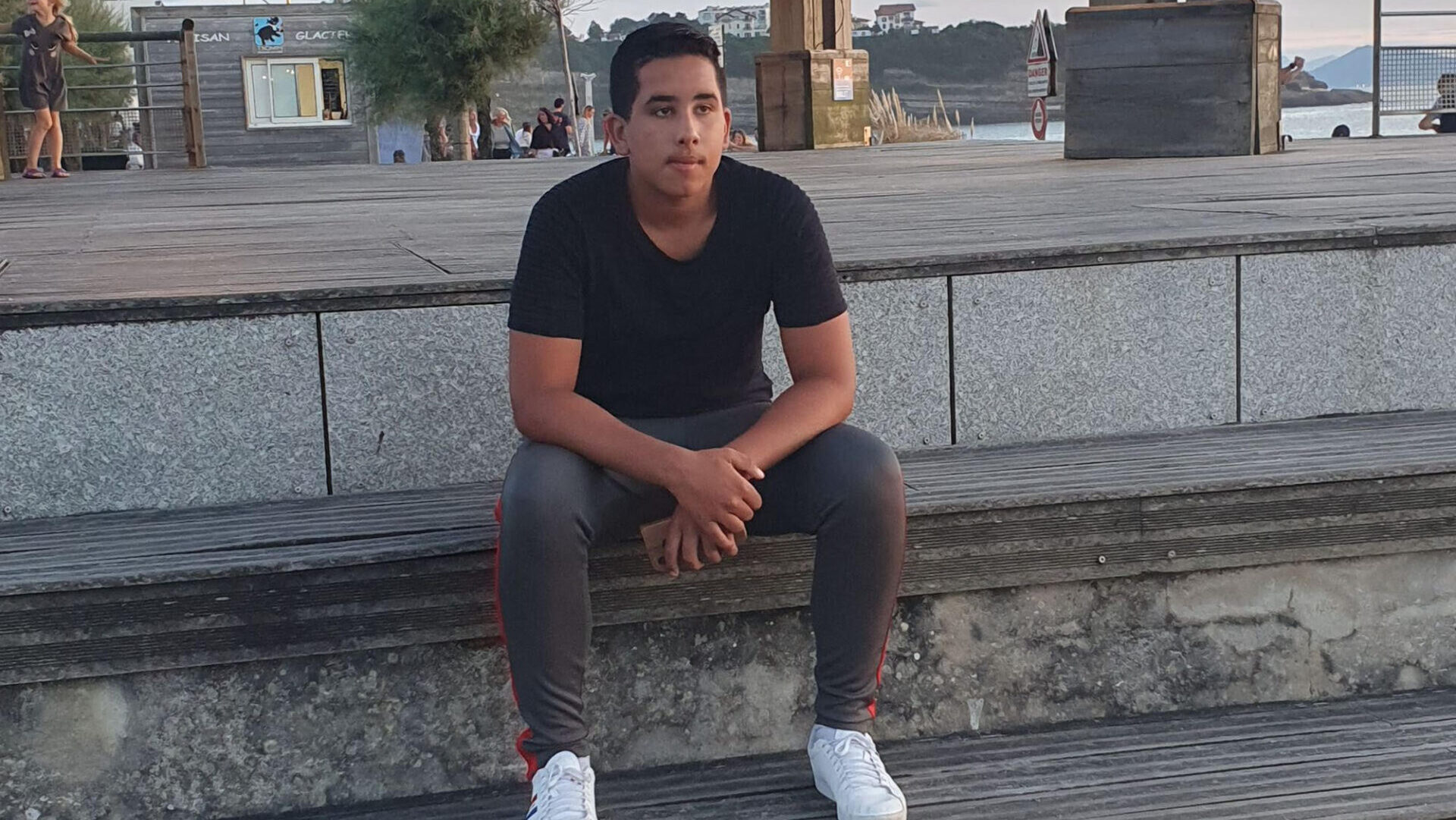 Ilies Pellisson poses for a photograph in an unknown location at an unknown date. (Real Press)

A French mother said she is proud of the man her formerly frail son is turning into after he took up rugby and tackled a violent mugger who had run off with a woman’s purse.

The child, Ilies Pellisson, is just 14 years old and plays for Aviron Bayonnais.

He lives with his family in Bayonne, a city in the southwestern French department of Pyrenees-Atlantiques, and on the day of the attack he had gone to the beach in the nearby town of Biarritz with his brother.

He said they were waiting for a bus in Ixelles square, which is just next to the police station, at around 2 p.m. on Sept. 13.

But the quiet was shattered when a retired woman, whose age is unknown, started screaming.

He quickly realized she was being robbed.

He told Zenger News what happened next in an exclusive interview: “We heard a woman scream. There was a man. It looked like he was pulling her arm. But actually he was pulling on her purse. My brother and I didn’t move, in case he had a weapon. We didn’t know. But then the man started to run away.

“But there was a dead end. So he ran back towards us. I told the lady I was going after him.

“I ran after him and hit him on the back of the head. On the skull. He fell on the ground.”

He said he was relieved to see the blow had knocked the fight out of the mugger and added he could see he was afraid.

He added: “The purse had fallen on the ground, with the money in it. I picked it all up and let him go.

“I went and gave it to the police as there was a police station nearby.

“Then they took my details and all that. That’s when the lady came in. She was afraid and crying. She thanked me. And then we left.”

But the story did not end there as on the bus they saw a man get on with a bloody arm and a slight limp.

He said: “We asked ourselves if it was him.

“We looked each other in the eyes. It was him. So I went to the front of the bus and I called the police.”

He said a short while later cops turned up and arrested the man, taking him off the bus in handcuffs.

He was not given a reward and in fact, at first, the woman victim thought he was the thief.

He said: “When she went into the police station, the woman looked at me and said: ‘Are you the one who mugged me?’ I said: ‘No, Madame, I’m the one who brought your purse back.’”

He added he was not worried about not getting a reward saying: “I wouldn’t have accepted any money.”

Asked if she was proud of her son, his mother Mallorie, 33, who works as a caregiver for people suffering from neuro-degenerative illnesses, said: “Yes, indeed.”

She said she was planning to meet them in Biarritz with her youngest child, and added: “They told me they were on the bus. So I picked them up in Anglet, not far away. They told me something had happened.

“When they told me all that, I was a bit… I thought ‘what if he had had a knife?’ Knowing that there was an incident that took place on around 8th July, there was a bus driver in Bayonne who was killed…

“That being said, I am very proud, because my son wasn’t recognized by his dad. He was quite fragile when he was younger. He was a fragile child. And rugby really helped him. And his actions that day are extraordinary …

“I’m very proud of him and of the man he is becoming.”

Ilies Pellisson wants to one day become a firefighter or a police officer.

The man arrested was reportedly under the influence of alcohol.

Once arrested, the suspect admitted what had happened. He was released and will be summoned before a court at a later date.

Zenger News contacted the Biarritz police station at 1 Avenue Joseph Petit for comment. They were unable to comment immediately and requested Zenger News write to them by email. At the time of writing, they had not replied.