Despite frantic rescue efforts, only a fraction of the 470 stranded whales were expected to survive.
By Les Steed September 25, 2020
Facebook
Twitter
Linkedin
Email 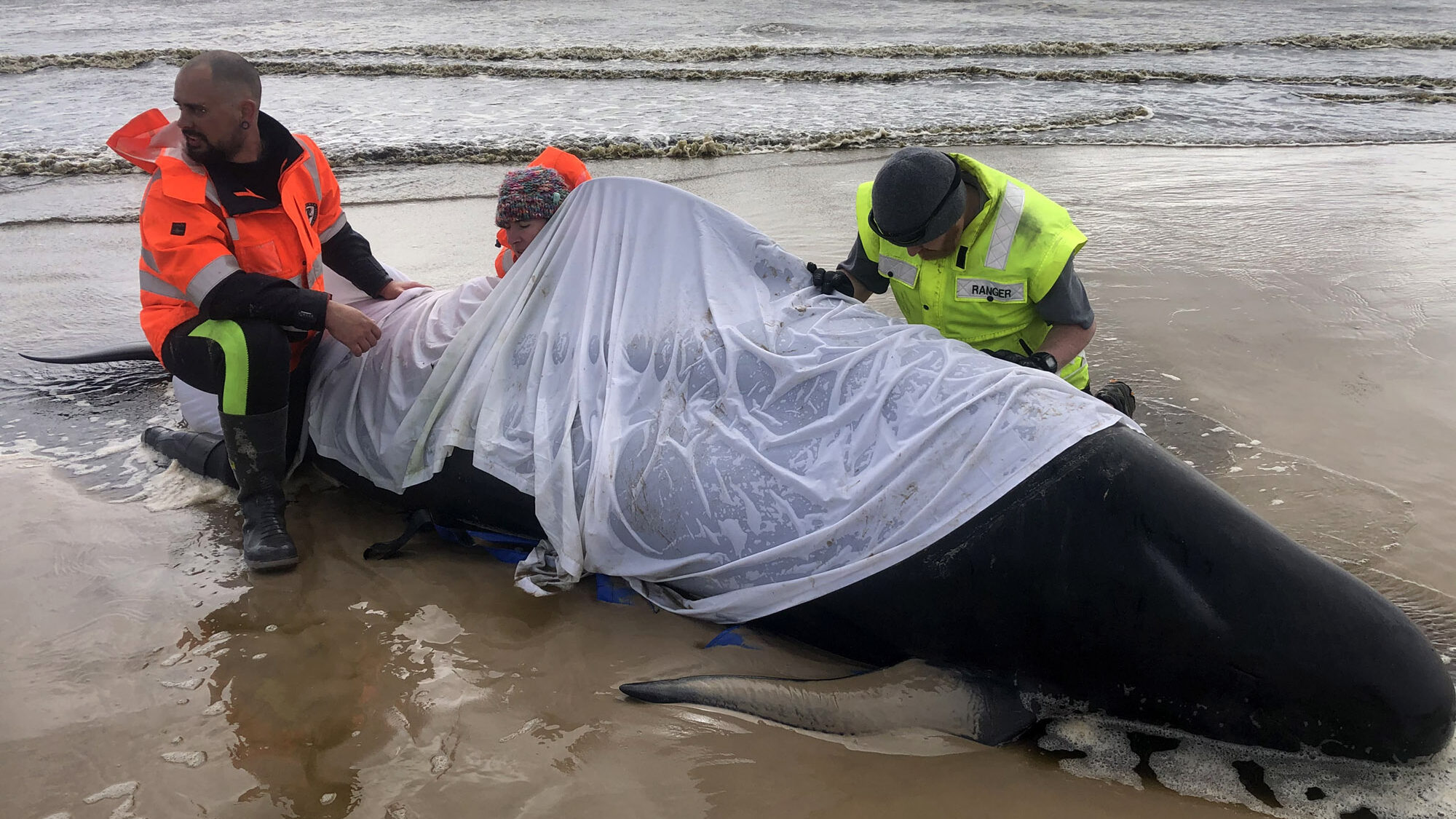 Dozens of whales found dead and stranded in Australia in an undated photograph. (Tasmania Police/Clipzilla)

Rescuers have been working frantically to try and save as many of the 470 long-finned pilot whales found stranded  on the west coast of Tasmania this week as possible. Despite those efforts, officials say roughly 380 of the creatures will likely perish as a result of mass beaching.

Tasmania Parks and Wildlife Service Manager Nic Deka said the first half of the pod (270 whales) was spotted struggling on a wide sandbank during an aerial reconnaissance of the remote Macquarie Harbor on Sept. 21. Then, two days later, roughly 200 more whales were spotted about 10 kilometers (6 miles) further down the coast struggling close to shore.

Rescuers have been freeing the whales by using boats, manpower and tarpaulins to drag the whales to deeper water. However, some of the creatures re-beach after being released in deeper waters.

Given the size of pilot whales – they are a species of oceanic dolphin that grows to 23 feet (7 meters) long and can weigh up to 3 tons (3,000 kilograms) – moving them is no easy feat. Thus far, only about 50 animals have been saved by a team of state park workers, fishermen and volunteers working in freezing waters.

Rescuers are now searching through the dying whales still left on the beach to identify those most likely to survive and prioritizing which ones to rescue. “From the air, they didn’t look to be in a condition that would warrant rescue,” Deka said. “Most of them appeared to be dead.”

He added: “While they’re still alive and in water, there’s still hope for them, but as time goes on they do become more fatigued.”

This stranding is the largest ever in  such event in Tasmania, Kris Carlyon, Marine and Conservation Program wildlife biologist said in a news release from the Tasmanian government’s Department of Primary Industries, Parks, Water and Environment. “Globally there has been some much bigger events than this, twice the size and over for example in New Zealand,” Carlyon added.

Officials estimate around a third of the original group of whales had died by the end of the day on Sept. 21, and that only 30 more are likely to have survived two days later. Officials said rescue efforts will continue until all the surviving whales are moved to deeper waters.

Scientists are still not sure  why the whales beached themselves. That topic was explored in an article by the Fish & Wildlife Foundation of Florida, which found that if one member of a pod creatures is sick or in trouble, its distress calls can cause the other members to follow it to the beach, resulting in a mass stranding. In addition, “Some scientists believe sonar signals and other man-made loud underwater noises may contribute to beaching events,” the foundation report notes.

Meantime, Tasmanian officials are also trying to determine what to do with the carcasses of the whales that died. “We can’t leave the whales in the harbor, as they will present a range of issues. We are committed to retrieving and disposing, but our key priority is to remain focused on the rescue effort,” said Deka, the parks and wildlife official.