While production aims to help the agricultural sector, hemp is not yet legal in the country.
By Raza Hamdani September 24, 2020
Facebook
Twitter
Linkedin
Email 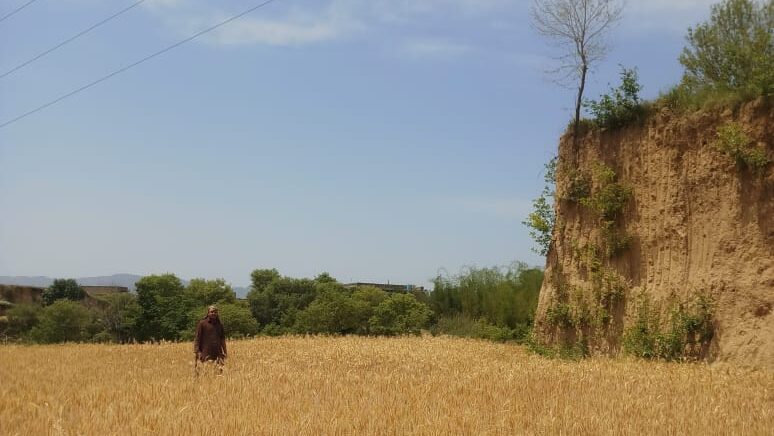 Naghib Khan, a landlord in Haripur, near Islamabad, Pakistan, on his land that was earlier announced to be a part of the first phase of hemp cultivation. (Courtesy: Raza Hamdani.)

Pakistan’s government approval to produce industrial hemp could result in a billion-dollar market. The country has pushed for the development of a cannabis-based economy to improve its foreign exchange position to tackle economic challenges.

The Cabinet approved the first-ever license for the industrial and medical use of hemp, under the Science and Technology Ministry and the Pakistan Council of Scientific and Industrial Research, Fawad Chaudhry, the minister for science and technology, tweeted on Sept. 1.

He said the “landmark decision” would place Pakistan in the international cannabidiol (CBD) market worth billions of dollars.

“The plant’s production was approved to be carried out only under government control for now. This would allow further research and safeguards in production,” Chaudhry said.

CBD is widely touted for its benefits in natural health care. It is said to relieve pain, possibly reduce anxiety and depression, and alleviate symptoms related to cancer and the side effects of cancer treatments such as nausea and vomiting.

While there are segments of the population that oppose hemp use or cultivation, Chaudhry sought to allay concerns. The minister said some people are misinterpreting the Cabinet decision as approval to cultivate a poppy-like crop in Pakistan that could be used to make addictive drugs.

“We want the hemp market to generate $1 billion (in revenue) in the next three years,” he said. The production in the first phase includes sites in Peshawar, Chakwal and Jhelum.

Several countries, including China and Canada, are cultivating hemp on tens of thousands of acres.

The minister said the plant’s seed is used to make hemp oil, the leaf is used in medicines, and the stem is used to make a fiber that can replace cotton in the textile industry.

The agricultural sector of Pakistan has been the backbone of the country’s economy and a major source of food security and employment. It is the largest sector in terms of labor participation, employing about half of the country’s workforce.

With the sector’s contribution to GDP dwindling to around 19 percent from 53 percent during the last few decades, the cultivation of hemp is seen as one way to boost the economy.

CBD is already a billion-dollar industry in the United States. China, the U.S. and India are among top exporters of CBD, with exports pulling in $912 million, $308 million and $283 million, respectively, in 2018.

Many countries are planning to go beyond the CBD business because the overall cannabis market is valued at upwards of $340 billion. There are about 263 million cannabis consumers worldwide.

“The legal cannabis industry has gone global as more than 50 countries around the world have legalized some form of medicinal cannabis,” a 2019 report by New Frontier Data states.

The cultivation of this agricultural commodity will produce a wide range of products and help generate tens of thousands of jobs across multiple sectors, including research, compliance, government regulation, transportation, laboratories, marketing and retail.

Pakistan’s government sees hemp’s potential as a sustainable replacement for cotton production. The country, which was once the fourth-largest cotton producer behind China, India and the United States, and the world’s largest exporter of cotton yarn, is witnessing a decline in the sector. Farmers are shifting from cotton to other crops due to imbalances in the industry, low prices and lack of high-quality seeds.

Supporters of the change say the growing conditions in Pakistan make hemp a potentially big crop in almost all regions. The plant already grows in the wild.

Naghib Khan, a landlord in Haripur, near Islamabad, said cannabis grows in a plentiful way on his lands, as it does in many other cities. He said the areas selected by the government for the first phase are suitable for growing hemp.

“The initial information said our area was included in the first phase of cultivation. But, it was later changed. I think it is a great initiative by the government if properly managed and implemented. The landowners and farmers will benefit,” Khan said. “However, there is many a slip between the cup and the lip. How will they distribute the seeds to the farmers? At what rate will the government buy? So on and so forth.”

The Pakistan Kissan Ittehad — an organization that represents small farmers — says the government should focus on the plight of armers.

Haseeb Anwar, the organization’s spokesperson, said that while the group welcomes the new government initiative, the power corridors must take into account the already dwindling agriculture sector.

Hemp currently is illegal as it is lumped with marijuana under the current laws of Pakistan.

Afnan Kundi, a senior lawyer at the Supreme Court, said many details are yet to be finalized. Once the process and procedure are announced, it will become clearer as to how to approach hemp production legally.

“In my opinion, only a change in rule by the Ministry of Narcotics will not be enough. Since the government is planning on issuing licenses for production, it has to pass a new law regarding the industrial production of hemp.”