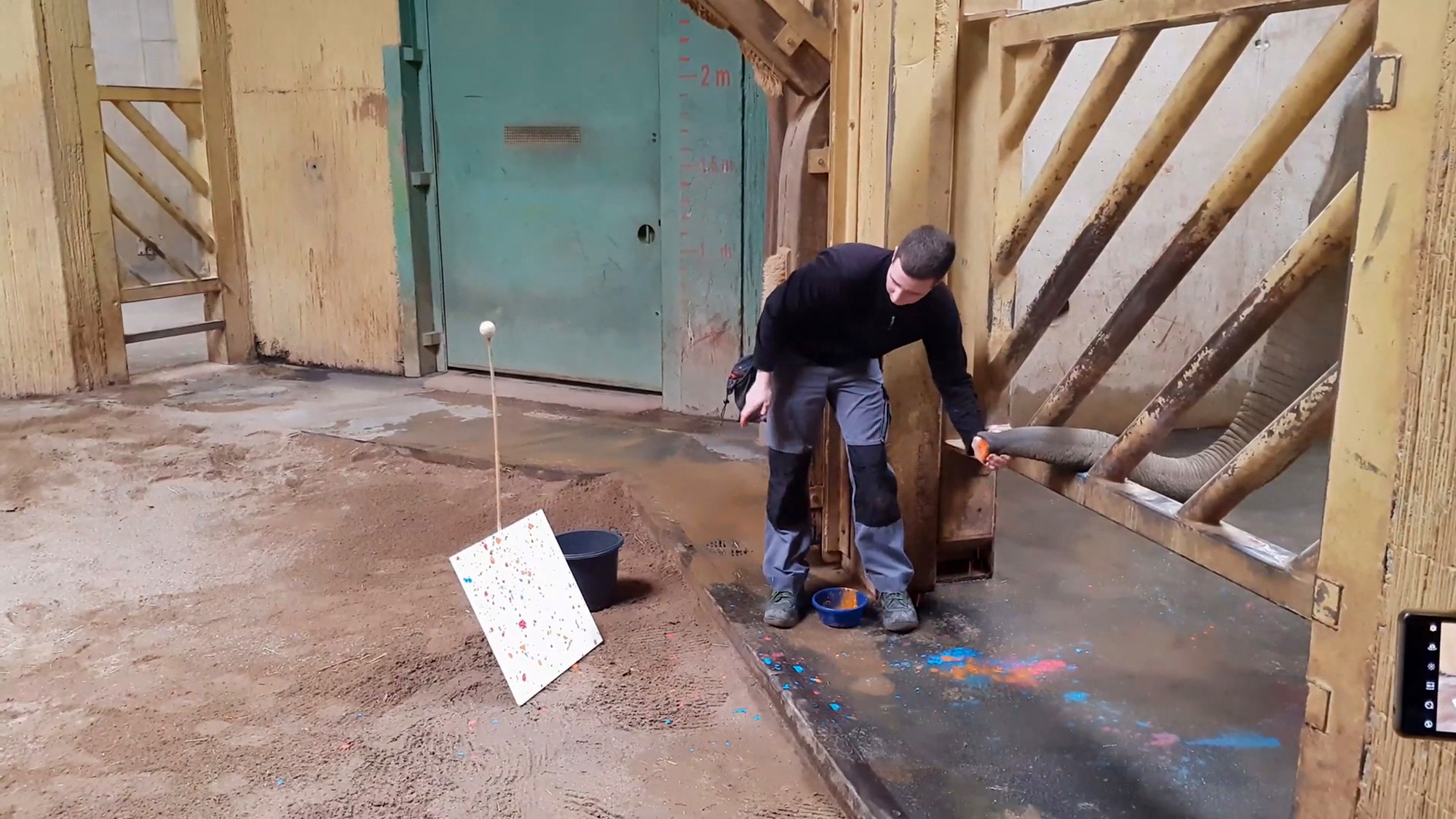 Zoo caretaker gives cues to Sita to blow the watercolor onto the canvas. (Zoo Osnabruck/Newsflash)

The world’s biggest paint sprayer may well be an elephant at the zoo here who uses her trunk to suck up colored paints and discharge them, thereby creating artworks being sold hundreds of euros each.

Sita the elephant started painting on canvases at Osnabruck Zoo in northwest Germany because keepers wanted to train her to spray on command during checkups by veterinarians. However, she was clearly enjoying herself and, since March, she has created paintings that have been sold to the public and raised 2,000 euros (about $2,4,00 U.S.).

That money, in turn, goes toward animal husbandry efforts at the zoo, as well as elephant conservation efforts in Thailand. According to the World Wildlife Federation, “Once common throughout Africa and Asia, elephants declined significantly during the 20th century, largely due to the illegal ivory trade. Though some populations are now stable and growing, poaching, human-elephant conflict, and habitat destruction continue to threaten the species.”

Zookeepers say when Sita is in the mood to paint (they can tell by her posture when she’s feeling artistic) they load up her trunk with watered-down, food-safe finger paints that she then sprays at a canvas.

Originally created as part of her daily training exercises to get her used to spraying water from her trunk when her vets need her to, Sita’s artworks now sell for up to 200 euros (about $240) apiece. The zoo currently has 14 works of her works for sale.

“Most of the time, the elephant has a lot of fun with it because she is very eager to learn, and she gets treats during training that she doesn’t want to miss,” says Andreas Wulftange, the zoo’s scientific curator. “She needs to be having fun though, so this doesn’t happen every day.”

The 7-year-old Asian elephant lives at the zoo with her mother, Douanita, and her brother, Minh-Tan. She follows in the artistic footsteps of one of the zoo’s orangutans, Buschi, who also paints.

«Previous Post
Test Your News Knowledge With Zenger: A Sign of Life on Another Planet»Next Post
Charity Founder Charged With Using Donations for a Luxury Lifestyle