Insurance coverage can fall short of what a business owner needs to resume operations after protests turn violent. 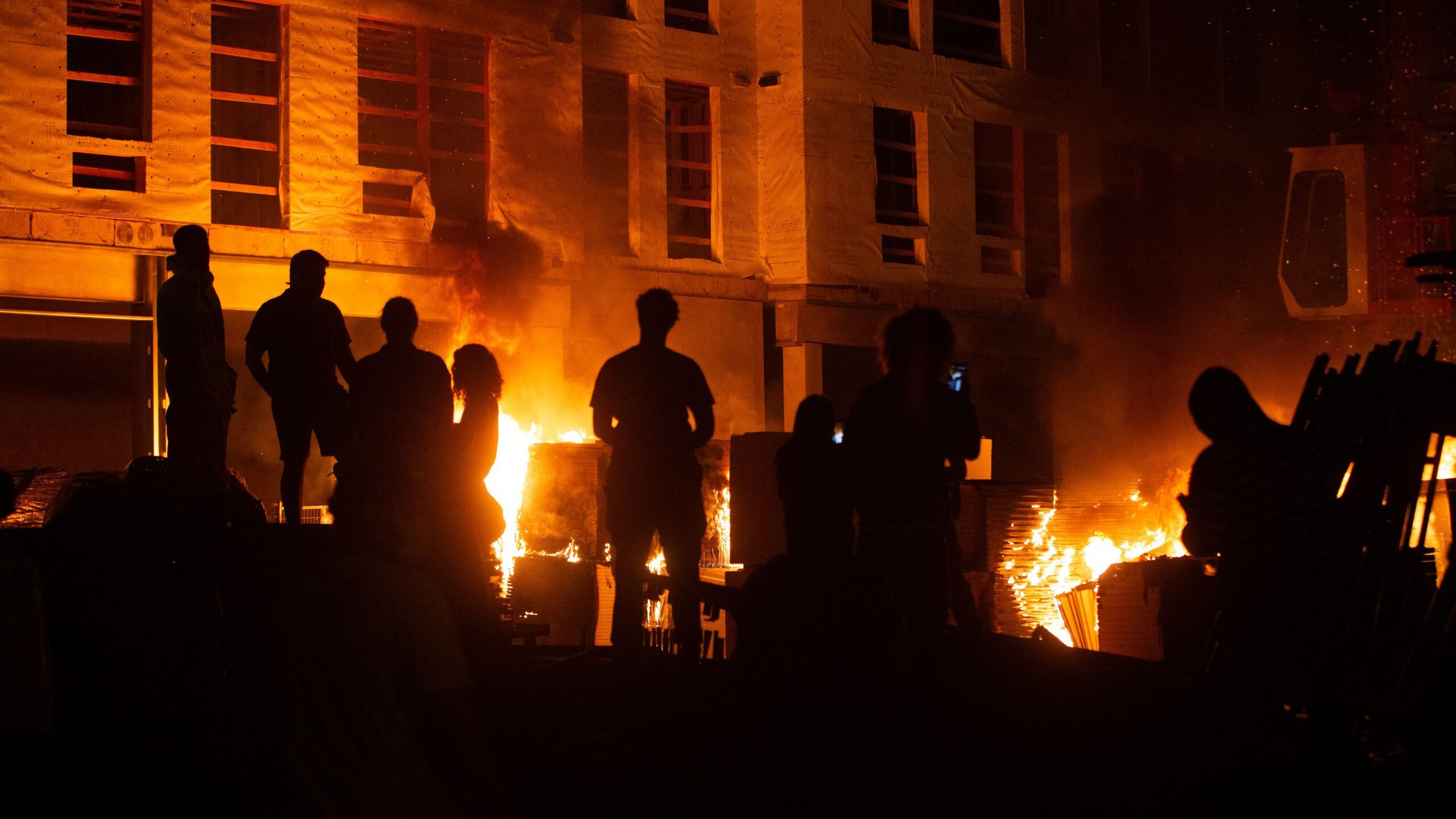 After a construction site was set on fire during riots in Minneapolis over the police killing of George Floyd, protesters gather on the site as they watched the fire on May 27, 2020. (Chris Juhn/Zenger)

The Cincinnati-based gift store owners’ experience reveals vital lessons for managers and the interplay between politics and insurance. The Deiningers’ difficulties may also be instructive to mayors and governors, who oversee police and insurers.

“We were truly in support of the [current] protests,” Carolyn said. “[I]n the scheme of things we were able to let it go because it feels feel like people are listening and talking and something positive might be coming out of this.”

Loretta Worters, vice president of media relations at the Insurance Information Institute, said that “with these riots, there is coverage [in commercial property policies] for physical damage to the business.”

Coverage riders expand protection, she said, whether for looting or a loss of business—provided a policy is still in force.

“A lot of small businesses either don’t have coverage or, particularly in the pandemic, some of these companies go bare, which is the term when they drop their coverage and decide not to renew,” Worters said.

Sitting at home on July 30, 2020, the Deiningers received a text from a good friend around midnight. Their store had appeared on television and the news wasn’t good.

“She said, ‘There’s rioting; it looks bad,’” Carolyn said. “Right after that, we started getting texts, emails. The alarms went off.” People had smashed glass and broken into the store.

Almost all their windows were broken and a handful of items stolen, requiring a full week of cleanup. Good insurance and a grant that covered the deductible helped.

Many small businesses that have seen damage and looting over the past months were likely not so fortunate. The limitations of insurance, potential fights with insurers and the reality of trying to rebuild and reestablish operations have become major hardships. Financial pressures pushed some to drop coverage entirely.

People who assume insurance companies will make every business owner whole are wrong. And the Deiningers aren’t the only business owners dealing with riots or looting.

Who has coverage and who doesn’t

Tim Gallagher, a senior vice president at the Marsh & McLennan Agency, a major U.S. insurance broker, said that “a few percent” of their clients “were impacted directly by the riots.” Some were heavily affected.

Gallagher is based in Minneapolis, where George Floyd died after police officer Derek Chauvin knelt on his neck for what video footage showed was nearly nine minutes, sparking the widespread protests and riots across the country. Many damaged and destroyed Minneapolis businesses were owned by immigrants and African Americans.

They see the same fallout as other business owners. No income for months. Existing expenses that can’t be ignored. Even with rent forbearance, landlords eventually expect their due.

Property owners look for ways to cut the bills and commercial insurance is one area as renewal prices have been trending more than 5% higher than the same time last year, according to data from the IVANS insurance industry exchange.

“We have a pretty vibrant small business unit that focused on companies with 50 or fewer employees,” said Gallagher. “Due to Covid, some of these businesses were not able to pay their premiums. If they were not in operation, they may not have maintained their insurance through this process.”

He wasn’t aware of any clients who had rioting or looting losses with no coverage.

Insurance coverage can fall short of what a business owner needs to resume operations. A policy that does not specifically offer “replacement cost” may leave an inadequate amount to rebuild and restock. With replacement coverage usually comes a coinsurance requirement to cover a specified percentage of that amount, like 80%. Fall below, and the amount covered starts to drop.

There are businesses that have reduced their coverage. “Those folks did call us,” said P.J. Miller, a partner with Wallace & Turner Insurance of Springfield, Ohio. “Their comments were, ‘I’m shut down, have been for a while, we don’t have the sales coming in, so how can I cut out some of the coverage that wouldn’t necessarily be needed during the shutdown?’”

If the cuts included business interruption insurance and, on reopening, the company found itself in a riot, that could be a problem. Time out of business means lost revenue. No coverage, no money coming in when it’s impossible to operate.

Many small businesses opt for 30, 60, or 90 days of interruption insurance, Miller says. However, serious damage could push recovery times far past those limits.

Tricks of the trade

An insurance company’s primary mission isn’t paying claims. If a building burnt down with all the receipts for inventory and fixtures, the owner won’t have proof of his losses—which an insurer will insist on seeing.

Business interruption insurance also leaves open the question of how losses are valued.

“The way an income claim is established is to look at prior periods of the business to see what the lost business is,” said Daniel Struck, a partner in the Chicago office of law firm Culhane Meadows. “An insurance company might make the argument, ‘Let’s look at the last three months when you were closed.’ It’s harder for a small business to argue against an insurer if the insurer is taking an adverse coverage decision. It costs money to do so.” That’s money the business likely doesn’t have, especially if the Covid-19 pandemic shut it down for months.

“A small company that appears to be legitimately headed out of business because of Covid, and which was headed that way pre-Covid, will have the hardest time,” said Mark Cooper, a partner with Michigan-based law firm Jaffe Raitt Heuer & Weiss. “There is a trend to be evaluated as to what these losses really are.” If the trend looks bad, so might the prospects of what help an insurance company will provide.

Recovery is a slow process. Some areas hard hit by rioting in the past, like South Los Angeles in 1992 after police were acquitted in the Rodney King beating case, weren’t restored even after decades.

A small business in an area that has seen rioting not only faces rebuilding but waiting for customers to return.

The recent Cincinnati rioting “has delayed bringing our employees back,” Mike Deininger said. “Not all our customers have returned.”

“We’ve been doing for 17 years and retail is tough,” Carolyn said. “Mike and I had been talking about retirement. It’s more a labor of love than a money-making opportunity. When this happened, especially since the damage of the protest happened, we have this new resolve to make this work and get back to where we were before with our neighborhood.”

«Previous Post
Have Your Fork and Eat It Too: Edible Cutlery Gains Foothold in Indian Market»Next Post
Ransomware Demands Surge During Pandemic