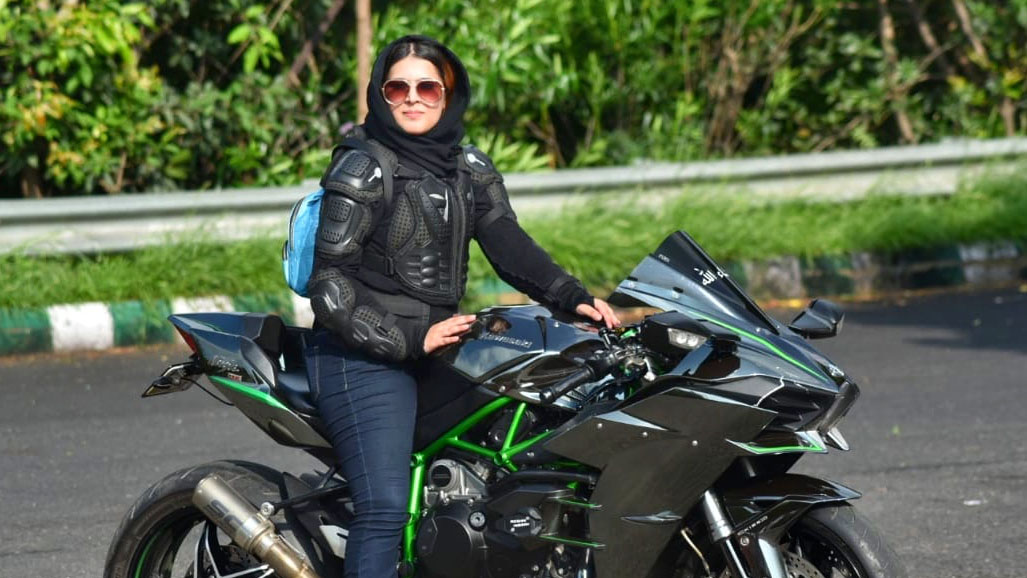 Roshni Misbah poses with her motorcycle in an undated photograph taken in an unknown location. (Courtesy: Mohammed Esa)

NEW DELHI — When 26-year-old Roshni Misbah zooms around on her motorbike in the mean streets of India’s capital, one can hardly look away. Her leather gear, boots and a shocking pink helmet grab attention. But what really turns heads is the fact that she wears a Muslim head covering—something that has earned her the nickname “Hijabi Biker.”

Now Misbah has a Kawasaki Ninja H2, one of the fastest bikes allowed on Indian streets. She’s the only woman in India to ride one, and she saved the money to buy it all on her own.

Few women in India ride two-wheelers, other than low-power scooters. Sports and cruise motorbikes are still primarily a man thing.

“At INR 3.9 million ($52,000), the bike has a pretty high price tag,” said Harmeet Singh, showroom manager at Kawasaki West Delhi. “You have to wait for six months to get delivery.”

Only one or two such bikes are sold in India every year, Singh said, and “Misbah is the only woman in India to own a Kawasaki Ninja H2.”

For Misbah, getting this bike meant saving up for months and selling her other Kawasaki Ninja, a lowlier model.

“People think my dad buys my bikes,” said Misbah. “It’s hard for them to assume that a woman can fund her interests.”

A graduate in Arab and Islamic culture from Delhi’s Jamia Millia Islamia University, Misbah runs a business selling motorcycle accessories and secondhand bikes. She also earns money by endorsing brands such as Liberty Shoes and Bosch automobile parts. In addition, she has been the brand ambassador for Indian Motorcycle.

“The first trip was from Kashmir to Kanyakumari,” said Misbah. “The second one was around the Golden Quadrilateral.”

The distance between Kashmir, the disputed hilly region in north India, to Kanyakumari on the southernmost tip of the country, is 1,775 miles. The Golden Quadrilateral—a network of highways that connects India’s four metropolises (New Delhi, Mumbai, Kolkata, and Chennai)—is about 3,600 miles long.

She may have ridden miles around the country, but her new ride will still be a challenge, say experts. And India’s roads are anything but safe. According to the National Crime Records Bureau’s 2017 report, there were 502,100 traffic accidents in the country in 2016 and 474,515 in 2017, the most recent year for which data are available.

Another Indian woman biker, Veenu Paliwal, died in a road accident on April 11 2016. She made headlines for riding her Harley-Davidson 48 in an otherwise male-dominated culture where women wearing the ghunghat (veil) are everywhere. Paliwal in 2013 reportedly reached a record street racing speed of 231.77 mph.

Her death near the ancient Indian city of Gyaraspur in central India brought the issue of road safety and biking to the the public’s front burner.

“The fastest motorcycles are usually legal only on racing tracks,” said Sarmad Kadiri, executive editor of Bike India magazine. “It’s a big machine and tricky to manage. The Kawasaki H2 is equipped with a supercharger, which one usually finds in sports cars but not in bikes.”

At 5 feet, 2 inches tall, Misbah can touch the ground only with her toes when she istraddles one of her mean machines. But “it’s all about skill. My height or my physical attributes don’t have much to do about it,” she said.

Making a U-turn can sometimes be a challenge. “It may take me a little longer,” she said, “but that’s OK.”

Misbah said she follows the tenets of her religion and finds no conflict between Islam and her passion.

“I have a graduate degree in Arab and Islamic studies—no one understands the essence of Islam better than me,” she said.

She has been taking her new bike out for rides on expressways on the outskirts of Delhi. The scarcity of traffic because of the nationwide lockdown to prevent the spread of Covid-19 gives her room to test her engine’s limits. And now Misbah plans to go on a cross-Indian road trip with her father, Mohammed Esa—also a bike lover—once the pandemic subsides

Esa had never thought his daughter would like riding motorcycles.

“She works very hard for anything she gets into,” he said. “I have seen her do things we never really thought she could. She is a confident girl.”

Esa said he and his wife always encouraged their daughter to break stereotypes.

“We live according to Islam,” said Esa. “Islam is progressive and modern, and she should be able to do what I could not.”

In India, Muslims constituted the largest minority at 172 million people when the 2011 Census was taken. They lag behind most other Indian socioeconomic groups in economic and education status, according to the Sachar committee report of 2006, initiated by then-Prime Minister Manmohan Singh.

Since the right-wing Hindu nationalist government of Prime Minister Narendra Modi came to power in 2014, Muslims have been marginalized further, according to the U.S. Commission on International Religious Freedom report published earlier this year.

The report identified India’s new citizenship law—which led to protests across the country— as anti-Muslim.

«Previous Post
Russia’s Covid Vaccine Candidate Sputnik V to Have Clinical Trials in India»Next Post
Have Your Fork and Eat It Too: Edible Cutlery Gains Foothold in Indian Market