Three Florida men were apprehended after officers were shot at outside of a nightclub.
By Lee Bullen September 18, 2020
Facebook
Twitter
Linkedin
Email 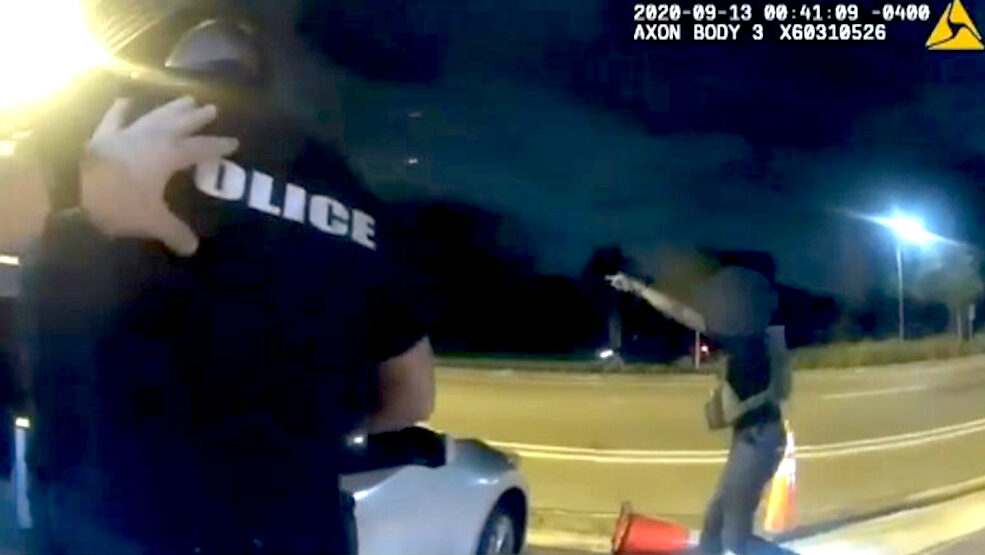 Police officers take cover behind a vehicle in Tampa on September 13, 2020. (Newsflash)

TAMPA, Fla.—Police responding to a shooting at a Tampa nightclub found themselves under fire by a drive-by shooter.

The altercation, which was captured on video, took place outside a nightclub in the Jackson Heights neighborhood of Tampa in the early hours of Sept. 13. The Tampa Police Department arrested Michah Omari Dozier, 22, in connection with the shootings at Club 1828.

The suspect faces 10 counts of aggravated assault with a deadly weapon on a law enforcement officer, aggravated battery with a firearm, and felon in possession of a firearm, police said.

Here’s how police said the shooting unfolded: At around 12.40 a.m., officers responded to reports of a gunfire inside the club that resulted in three patrons and a security guard being hospitalized with non-life-threatening injuries. While investigating, police said  gunshots were fired at officers, a security guard and patrons from a vehicle traveling north toward Hillsborough Avenue. With police vehicles in pursuit, the suspect’s car crashed a few blocks away. Its three occupants fled on foot and were subsequently captured.

The trio of suspects have been identified, and two were released pending the investigation. Dozier, who the police say was driving, remains in custody.

The Tampa gunfire is one of 453 mass shootings that have taken place thus far this year across the U.S. according to the Gun Violence Archive. (The archive defines mass shootings as any in which four or more people are shot and/or killed.)