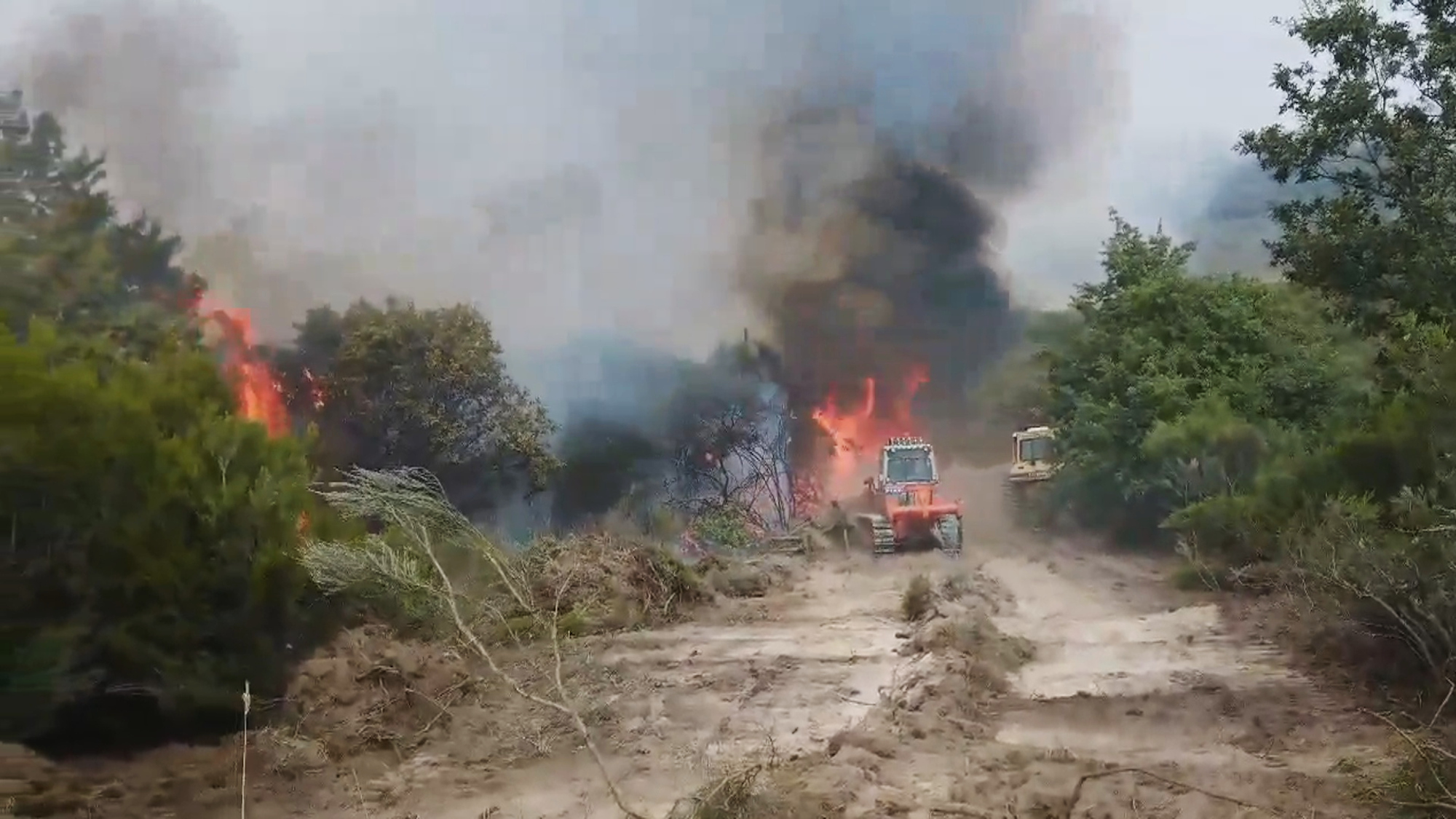 A tractor drives down a dirt road in the province of Ourense in northern Spain to put out the fire in an undated photograph. (@AT_Brif/Newsflash)

The American West isn’t the only region in the world fighting major forest fires. Northern Spain, for instance, is currently home to nearly a dozen blazes that burned more than 9,800 acres of land last weekend.

The fires, which were fed by strong winds and high temperatures, were reported in three provinces — Lugo, Ponteveedra and Ourense — the last of which suffered the most damage.

Videos of the blazes show authorities battling the flames, which can be seen painting the sky orange and consuming large areas of land. Among the tactics firefighters are seen using is placing large vehicles to create barriers and digging ditches to contain the flames.

Locals fear further spreading of the fires given the weather conditions as the region has reported some of their hottest months in history this summer.

In a statement, Spain’s Rural Affairs Councillor Jose Gonzalez said the situation is “complicated” due to changing winds, but fortunately did not cause any injuries except for a firefighter who suffered a heat stroke. Reports on any damage to property were not immediately available.

Firefighters are also hoping for some help from Mother Nature, as this coming week is expected to bring some rain to the region.

The Spanish blazes are dwarfed by those plaguing the western U.S.  So far this year, America has experienced 87 large wildland fires that have burned over 4.7 million acres, according to statistics compiled by the National Interagency Fire Center. Most of those wildfires are in California, Idaho, Oregon and Washington states.

The frequency and intensity of wildfires in the U.S. has made such events a controversial topic when it comes to whether global warning is fueling more such blazes. The Environmental Defense Fund is among those who say climate change “is making these fires even worse… Severe heat and drought fuel wildfires, conditions scientists have linked to climate change. If we don’t break the warming cycle, we expect more wildfires in the years ahead.”

On the other hand, many conservatives, such as high-profile radio host Rush Limbaugh, dismiss that notion. On his website, for instance, Limbaugh posted an item on Sept. 11 with the headline, “Liberal Policies, Not Man-Made Climate Change, Worsen Left-Coast Fires.”