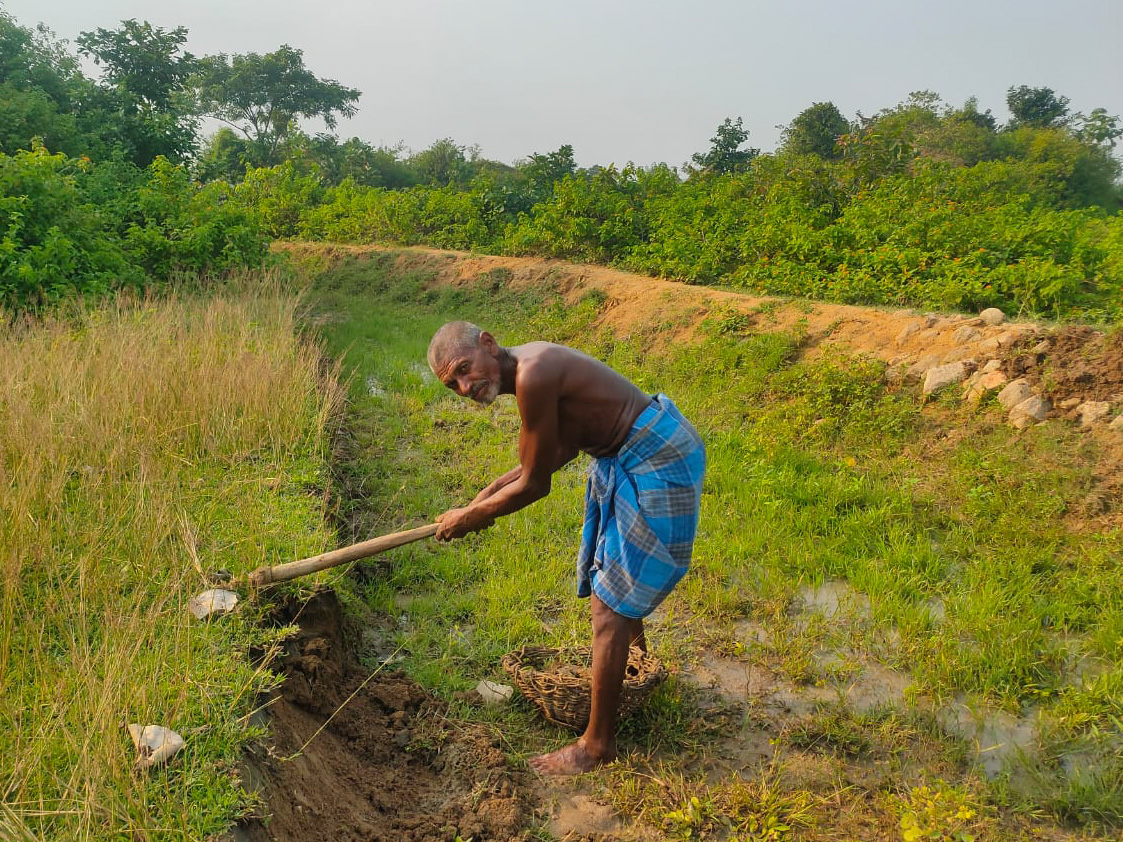 Laungi Manjhi, a 65-year-old resident of Kothilwa village in Gaya — a city in India’s eastern state of Bihar — has rejuvenated a 1.9-mile canal to conserve rainwater. Manjhi toiled on this canal for over three decades.

“It was 30 years ago when I started it,” Manjhi said. The local government officials are planning to build on his efforts and extend the project to help more villages.

Kothilwa’s residents belong to the Dalit community, which is placed at the bottom of India’s discriminatory caste system. The village falls on the “red-corridor” — the areas under the influence of outlawed Maoist groups. Most residents of Kothilwa are poor marginal workers, with little or no land.

Manjhi says he owns a bigha (1,000 square yards) of land, and rears cows and goats. Of his four sons, three work as daily wagers in other cities. Manjhi started his gargantuan effort when he saw water running off the hill and going into the river. “I thought it would be great if I could stop this, and instead channel the water for use.”

Every day, Manjhi would take his herd to the hills and leave them to graze, while he would break his back to dig the land. He was often discouraged by his family. “They told me I was wasting my time doing this. I would not get any wages for this. So, they asked me what will I eat?” he said.

Nothing, however, deterred Manjhi from carrying out the herculean task. He would fall sick, but would recover and continue the same drill. “I wanted the villagers to stay back and do farming here. Conserving water would make it easier,” Manjhi said.

The hilly terrain around Kothilwa is only fit for growing maize and lentils, according to Ram Vilas, a 32-year-old villager. “Manjhi wanted us to grow rice and wheat, which needed more water,” Vilas said. “There is no government here,” he said.

Manjhi’s effort came to the limelight, recently, when a local journalist visited the village to report on a road built by the locals from their contributions. They collected around Rs 300,000 from residents of six villages to repair the road and make it fit for use.

It was then that Manjhi shared the story of his hard work and showed it to the people. “They (the people) would say Laungi is digging, but we would always take it lightly. That day, we discovered it was a proper channel for water” Vilas said.

The local officials were equally awestruck with Manjhi’s efforts. Abhishek Singh – the District Magistrate (DM) of Gaya — said the officials were verifying the claims by Manjhi that it took him 30 years to finish it, and he did it alone.

“We have confirmed there is a channel, which he rejuvenated. It is around 1.9-mile (3 kilometres) long,” Singh said. “With his efforts, he has ensured water is channelized properly to a common pond for irrigation purposes.”

As news of Manjhi’s efforts flooded the local press, Singh put his officials on the task to inspect the project. The irrigation department has been asked to find ways to extend the project, so it can benefit other nearby villages. “We plan to extend the channel by another three miles (5 kilometres),” the DM said.

Meanwhile, for the locals in Gaya, Manjhi’s efforts have evoked the memories of another member from the Manjhi community – Dashrath Manjhi. Touted as the ‘Mountain Man’, Dashrath carved a road on a hill, after his wife reportedly fell from the hill and died in 1959.

Armed with a chisel and hammer, Dashrath labored for over two decades and carved out a 110-metre road in 1982. The new road cut short the distance, which earlier took more time to traverse because of the hill, and made it easier for the villagers to access the facilities in the nearby towns.

Dashrath further garnered fame for his back-breaking efforts when a Nawazuddin Siddiqui-starrer Bollywood biopic titled Manjhi – The Mountain Man was made in 2015. In 2016, a postage stamp was issued to commemorate his efforts.

“There may be many more Laungi Manjhis in other parts of the state,” Singh said. “People think this kind of work should only be done by government departments. But, Laungi has shown this can be done by individuals as well,” Singh said.

He said Manjhi will be made the brand ambassador for water conservation. “In a larger context, it might not be a big project. But for an individual, it’s a commendable job. We must appreciate his work.”