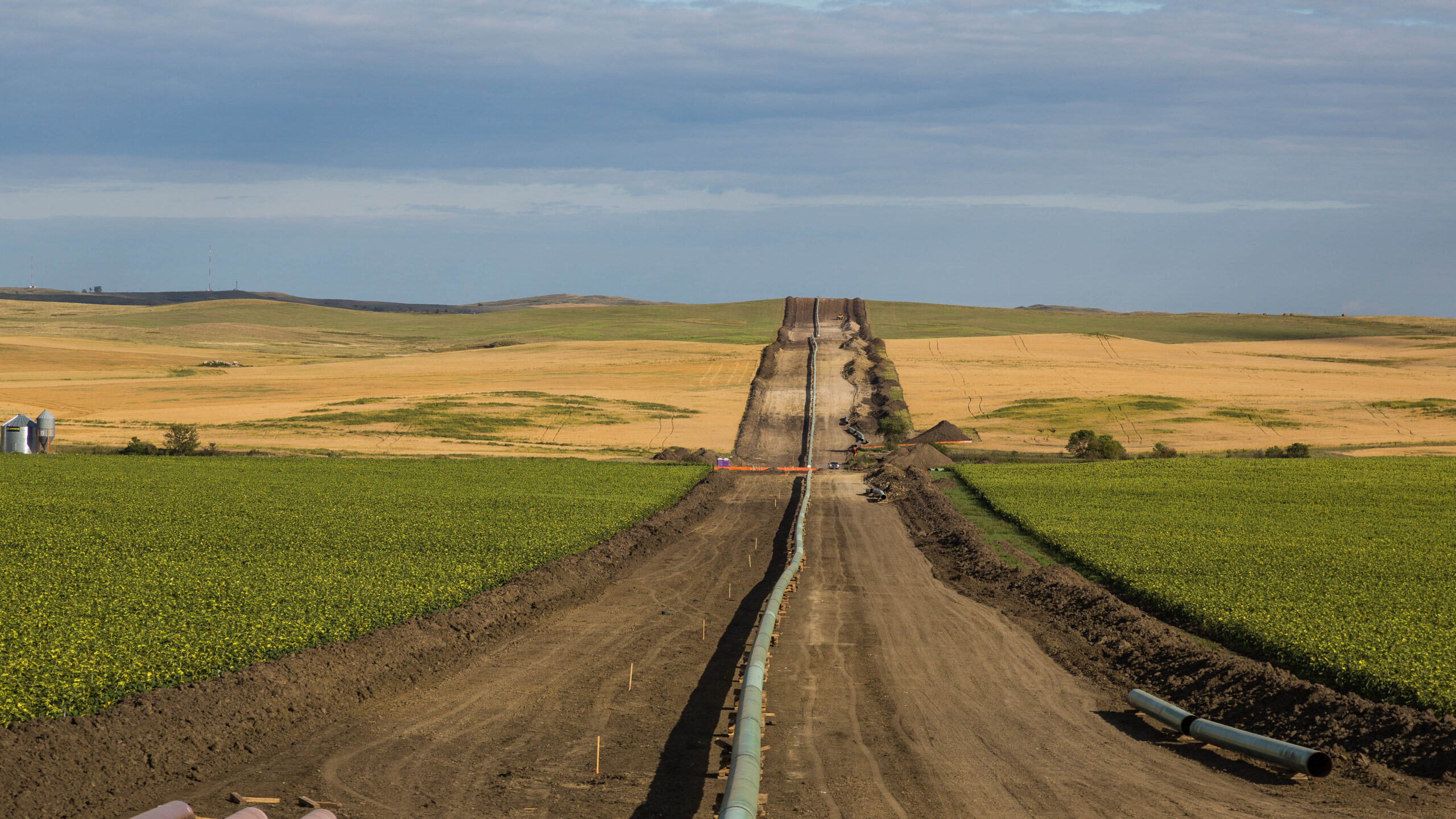 The Dakota Access Pipeline being installed between farms in New Salem, North Dakota on August 25, 2016. (Tony Webster via Flickr)

The Army Corps of Engineers has begun a court-ordered environmental review of the pipeline, according to a recently published notice in the Federal Register. As the review is conducted, a federal appeals court is allowing the pipeline to continue operations, reversing a lower court’s ruling that the pipeline must be shut down.

Last month, U.S. Court of Appeals for the District of Colombia overturned a July ruling by U.S. District Court Judge James Boasberg. “The purpose of this administrative stay is to give the court sufficient opportunity to consider the emergency motion for stay and should not be construed in any way as a ruling on the merits of that motion,” the three-judge appeals panel wrote.

It was the latest in a six-year battle between the crude oil pipeline’s opponents and proponents. The oil pipeline runs 1,172 miles underground from North Dakota to an oil terminal in Illinois, traveling under the Missouri River and Lake Oahe reservoir and through the Standing Rock Sioux Reservation, which spans North and South Dakota. It is owned and operated by Energy Transfer Partners and moves as much as 860,000 barrels of crude oil per day.

The lower court judge originally ordered the pipeline shut down within 30 days until a more thorough environmental impact study can be completed. That ruling found the Army Corps of Engineers violated the National Environmental Policy Act by not conducting a thorough investigation.

Jan Hasselman, an Earthjustice attorney representing the Standing Rock Sioux pro bono, said that the stay is merely a move by the court to buy time while it considers an appeal filed by the Army Corps of Engineers, adding that they will continue pursuing the argument.

“Earthjustice has been representing the Standing Rock Sioux Tribe in litigation against the Dakota Access Pipeline for four years. We’ll continue to defend the tribe’s most recent victory in court. Ultimately, the decision on whether to re-issue a permit will fall to the next administration, and will be influenced by the outcome of the 2020 presidential election,” Hasselman said to Zenger News.

The Standing Rock Sioux tribe relies on the Lake Oahe reservoir for drinking water and fishing. Pipeline opponents worry that a leak of the pipeline could pollute drinking water, harm wildlife and adversely affect the Sioux, while pipeline proponents argue it is safer than transporting oil through communities by rail or trucks.

“Although the tribe’s agency directors and expert consultants went to great lengths to try and educate the U.S. Army Corps of Engineers about the potential consequences of an oil spill and the abysmal safety record of the pipeline operator Energy Transfer Partners, their concerns were never taken seriously,” Hasselman said. “It was for this reason the tribe asked the court to halt pipeline operations and require the Corps to conduct a full environmental analysis.”

The Dakota Access pipeline has a sterling safety record, said Craig Stevens, a spokesman for the Grow America’s Infrastructure Now, a coalition of businesses, unions and trade organizations.

“Based on the corps’ decades of expertise and years of study on this specific path 90 feet below Lake Oahe, it is unquestionably safe. This debate is not about the safety of pipelines, it’s about a far left’s desire to keep U.S. energy resources in the ground and untapped,” Stevens said. “Their mission only seeks to weaken our nation’s national and economic security and tip the global balance of power towards our adversaries including Russia, Iran, and Venezuela.”

Doug Crow Ghost, the administrator of the tribe’s water resources, said they have a legal plan of action while they wait for the appeals process, but did not give further details. “I do not think that the Army Corps of Engineers under the current administration will do a though and honest study,” he said.

In a court brief filed by the state of North Dakota, up to 7,175 full time jobs will be lost if the pipeline shuts down. North Dakota will lose an estimated $4.9 billion in gas and tax revenues. Without the pipeline, crude oil will need to be shipped by train, which will affect farmers and food commodities.

“Many states produce large amounts of grain currently shipped by rail—grain that will suffer displacement owing to competition with higher-revenue oil for access rail transport,” the brief states, “if the Dakota Access Pipeline is shut down such competition is likely to revisit the market conditions that obtained before the pipeline became operational in 2017, namely intractable railroad congestion, rotting grain, higher food prices and, ultimately, a potential for food shortages.”