Activists call for punitive action as cases of sexual violence are on the rise in the country. 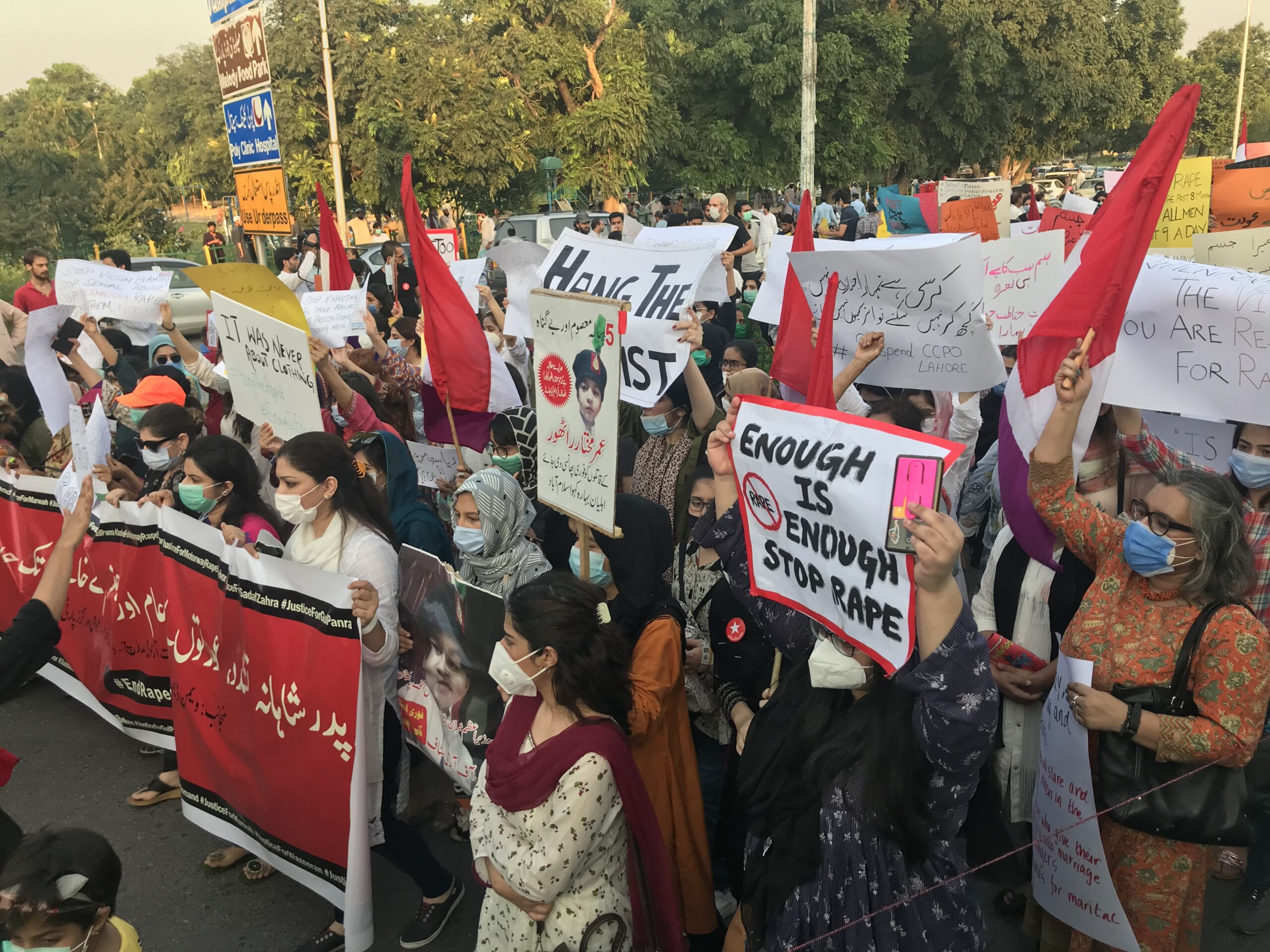 Protests erupted this week in Islamabad, Pakistan's capital, following a police chief’s comments about the victim of a gang-rape that took place on a highway near Punjab's provincial capital, Lahore. (Raza Hamdani/Zenger)

Protests have erupted in Pakistan after recent comments by Omar Sheikh, Lahore’s police chief, questioning the decency of a gang-rape victim on national television.

Sheikh blamed the victim for being out of her home late at night. His comments have been met with widespread outrage.

The incident took place on the motorway close to Punjab’s provincial capital, Lahore, 235 miles south of Islamabad, during the early hours of Sept. 10, according to a police report. A copy of this report has been obtained by Zenger News.

“What was the victim doing outside the house at 1 a.m.?” Sheikh said in a TV interview. “Why did she take the motorway instead of the GT Road?”

The motorway is considered one of the safest roads in Pakistan. The road network has its own motorway police, equipped with the latest automobiles and technology.

Sheikh also said Pakistan’s society is not such that women could travel late at night. “People with daughters and sisters, be cautious next time,” he said.

On the day of the incident, the victim’s brother received a call from her at 1 a.m. informing him that her car had run out of fuel on the motorway, according to the police report.

The victim was accompanied by her children and had just left her home in Lahore. The brother quickly reached the location on the motorway, along with a friend, only to find the vehicle empty with broken windows and bloodstains on its white exterior.

He searched the vicinity and found his sister and her children in nearby fields. His sister was visibly distraught and was struggling to make it toward him, along with her children. She said the assailants had grabbed her and the children and dragged them to the fields.

There, two men sexually assaulted her in front of her children. Then they robbed her of her valuables, including cash and jewelry.

This incident follows a similar sexual assault in Karachi where a 5-year-old girl was assaulted and killed, and her desecrated body was thrown into a trash heap.

There have been at least 2,000 registered cases of rape and 111 cases of gang-rape in the province of Punjab this year.

Experts say police officers are often not equipped to address the media on such sensitive issues.

Tahir Imran Mian, 42, who has conducted numerous training sessions, organized by the Ministry of Information, with police officers, said they are uncomfortable talking to journalists.

“As a rule of thumb, they (the police officers) are told to engage with the media in such a way as to avoid any gossip, hearsay, and rumors,” said Mian.

“The Lahore police chief did everything opposite to what the police officers are told,” he said. “Gender sensitivity and sectarian or religious sensitivities are usually drilled in these sessions. He went without any preparation.”

Sheikh’s comments have sparked demonstrations and protests all over the country, with people demanding the government take punitive action and fire him. Hundreds of citizens have taken to the streets and to social media forums to voice their opinions.

“It is not the attitude of an individual but of the ruling classes and the state,” said Minerwa Tahir, a social activist who has a postgraduate degree in gender and sexuality from SOAS University of London.

“I don’t think sexual violence is simply a question of patriarchal ideology — that’s only a symptom,” she said.

Minerwa said the root cause of the problem is the material condition of the society where men feel they can violate the bodies of women since the latter are economically weaker.

The police chief’s comments were also condemned by the federal minister for human rights, Shireen Mazari.

“Nothing could ever rationalize the crime of rape, she tweeted.

“For an officer to effectively blame a woman for being gang-raped by saying she should have taken the GT Road or question as to why she went out in the night with her children is unacceptable,” she wrote on Twitter. “Nothing can ever rationalize the crime of rape. That’s it.”

Tahira Abdullah, a veteran human rights defender, said this is just the tip of the iceberg of the violent crimes committed against women and girls in Pakistan that go unreported. Though she considers the publicity about the crime to be a good development, she emphasized that police reforms are needed to prevent gender-based violence.

“It is important a gender-crime unit is established in all the provinces, with specially trained female staff, hotlines, DNA testing, and longer-term PTSD trauma counseling and therapy,” she told Zenger News.