A ruling by the Court of Appeals allows the convicted member of the ruling party to attend, escorted by prison guards. 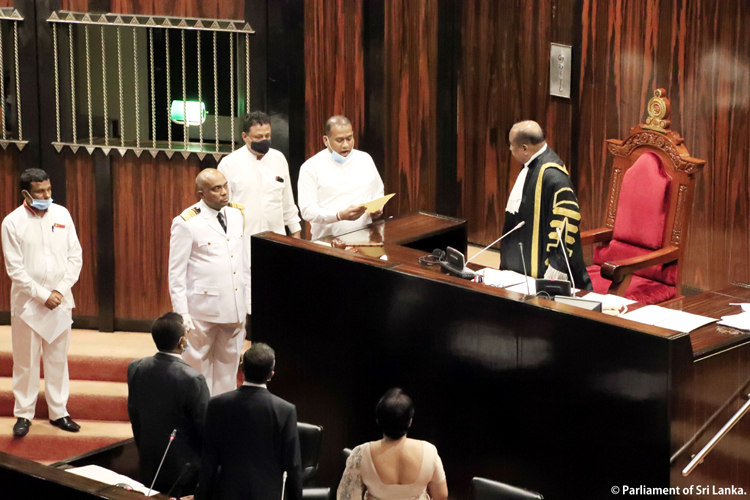 Premlal Jayasekara, a convicted murderer on death row, was sworn in as a member of parliament on Sept. 8, prompting opposition members to walk out in protest.

Jayasekara, also known as Chokka Malli, was found guilty by the High Court of Ratnapura on July 31 of murdering activist Sunil Perera, popularly known as Shantha Dodamgoda, ahead of presidential elections in 2015. He was sentenced to death along with two others convicted of the same crime.

Nonetheless, he took the oath as a member of parliament before House Speaker Yapa Abheywardhane after the Court of Appeals ruled he could not be barred from attending.

Jayasekara had filed a writ petition before the Court of Appeals requesting permission to attend parliament after he won the election in Ratnapura by 142,037 preferential votes. The Ratnapura district, about 60 miles east of Colombo, is famous for gem mining.

“This has never happened in history,” Harin Fernando, a member of parliament from the opposition party Samagi Jana Balawegaya (SJB), told Zenger News. “A convicted person has been allowed to slide in only because he made an appeal.

“Initially, the secretary-general of parliament did ask the attorney general for his opinion,” he said. “It was clearly stated that he was not allowed to enter parliament.”

Attorney General Dappula de Livera said that Jayasekara was not eligible to be a member of parliament under Articles 89 (d) and 91 (1) (a) of the Constitution.

Ruling party members, however, claim that since the Court of Appeals has allowed Jayasekara to attend parliament, it would have been contempt of court for the secretary-general to keep him out.

“It would be a contempt of court,” Keheliya Rambukwella, a spokesperson for the Cabinet confirmed. “A murder is not murder when there is an appeal until and unless the decision of the lower court is affirmed by the appeals court.”

On the day Jayasekara was sworn in, members of the SJB wore black sashes in protest and staged a walkout.

“We are quite alarmed by the behavior of the government and how the speaker overruled everything,” said Fernando. “The appeal was ruled in favor of Jayasekara despite the attorney general’s opinion. It is all very confusing.”

Perera, the man Jayasekara is convicted of killing, was a political activist of the United Nations Party of former president Maithripala Sirisena. In 2015, while Perera was decorating the stage for a political rally at Kahawatte in Ratnapura district, three men opened fire, killing him.

Jayasekara was allowed to file nomination papers by the Election Commission of Sri Lanka before he was convicted.

There is some precedent for people charged with crimes being allowed to become members of parliament in Sri Lanka.

Sivanesathurai Chandrakanthan, also known as Pillaiyan, a former Tamil militant and current supporter of the Sri Lanka People’s Front, remains in remand custody in connection with the 2005 killing of the former member of parliament Joseph Pararajasingham. However, he was permitted to submit his nomination papers in Batticaloa, where he was elected with 54,198 preferential votes. The High Court of Batticaloa allowed him to attend the parliamentary session on Aug. 20 this year.

Opposition leaders did not protest his oath-taking.

“The difference is that Pillaiyan has not been yet convicted,” said Fernando.

Fernando also said that the SLPP had previously opposed convicts being inducted into parliament.

“In 2010, they did not allow Gen. Sarath Fonseka, who had won the election, to participate in parliament as a UNP member of parliament,” he said.

“Fonseka could have appealed to a higher court,” said Rambukwella, the Cabinet spokesperson. “If there is a loophole in the law, the opposition should take that up in parliament and not just blindly protest.”

But opposition leaders also pointed out that the status of bills for which Jayasekara casts his vote will be under a shadow if his conviction is confirmed by the higher court.

“The future of Sri Lanka hangs in balance,” said Fernando.

Since being elected to power in early August, the SLPP government has vowed to change the constitution. President Gotabaya Rajapaksa has announced that his government plans to repeal the 19th Amendment to the Constitution, which limits presidential tenure to two terms and to draft a new constitution for Sri Lanka. The president also said changes would be made to the country’s electoral system.

“These are dangerous developments,” said Fernando.

“The proposed 20th Amendment will give absolute power to the president. He cannot be questioned even in court for a case on fundamental rights. That’s dangerous in a democratic setup.”

“A law like this will prevail even after Gotabaya Rajapaksa is not president anymore,” he said.

The gazette notification of the 20th Amendment was criticized in political circles not only because of the powers it gives the president but also because it proposes that people with dual citizenship can be sworn into parliament.

This is seen as a move to get Basil Rajapaksa, a brother of the president and the prime minister, into parliament. Basil Rajapaksa holds citizenship in the United States and Sri Lanka.

The opposition, however, is planning to make the road difficult for the government.

“We are building a ground campaign from next week,” said Fernando. “We will visit every village of our country to create awareness about the 20th Amendment.”