An estimated 4.5 trillion cigarette butts are thrown every year worldwide. 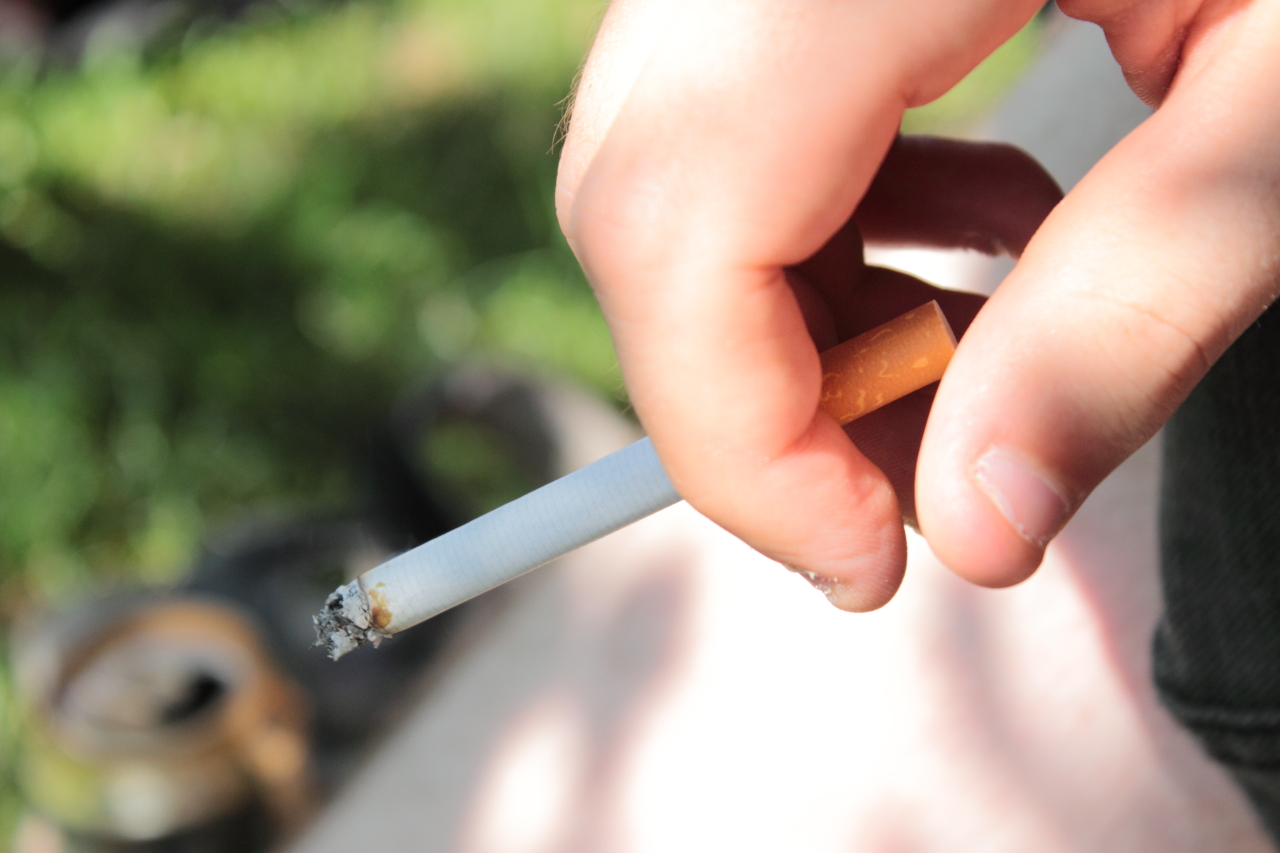 A hand holding a cigarette in an unknown location in an undated photograph. (Kari Söderholm via Flickr)

Setting a three-month deadline, the National Green Tribunal of India has directed the Central Pollution Control Board to come up with guidelines for the disposal of all cigarette butts.

The order pertains to commercial cigarettes and to hand-rolled cigarettes, known as beedi.

Discarded cigarette butts are the most common form of litter — an estimated 4.5 trillion are tossed every year worldwide.

The order, issued last week, calls for guidelines “in the interest of the environment.”

While tobacco and cigarette smoking have long been acknowledged as health hazards, green activists have been raising awareness about their environmental hazards as well.

“This is the first such order where the issue of cigarette butts causing environmental destruction has been recognized,” said Dr. Pankaj Chaturvedi, a Mumbai-based cancer surgeon. Chaturvedi, one of the most prominent anti-tobacco crusaders in the country, was among those behind the petition filed by Doctors For You, a pan-Indian nonprofit humanitarian organization.

“Our petition was much larger and aimed at the environmental hazards of both smoking and smokeless forms of tobacco,” he said.

The green tribunal order relied on a study by a group of experts from the Indian Institute of Toxicology Research. While their analysis of cigarette and beedi butts showed that the concentration of various chemicals, based on the parameters analyzed, was lower than the prescribed limits, “cellulose acetate is a major component of the cigarette and beedi butts. Studies show its degradation will persist for a longer duration.

“These studies, under the natural environmental conditions and laboratory simulating conditions, should conclude the safety or toxicity of cigarette butts to further correlate with human-health-risk assessment,” the order said.

The petition by Doctors For You highlighted many more impacts of tobacco. “Cigarette and bidi butts thrown carelessly are a common cause of forest and residential fires. They are also a threat to life, property, and forest lands,” the petition said. “Tobacco cultivation and curing process contribute immensely towards these environmental impacts — deforestation, soil depletion, loss of soil nutrients, and pollution due to the heavy use of agrochemicals.”

It stated that these butts consist of un-smoked remnant tobacco, cigarette filters, and a paper wrap.

“When discarded carelessly, they leach toxic chemicals into the environment. Thus, it contaminates the environment with heavy metals and over 4,000 poisonous chemicals such as nitrosamines, polycyclic aromatic hydrocarbons, nicotine, and others present in the un-smoked remnant tobacco. The filters can also trap residues from smoking, including arsenic, cadmium, and toluene,” the petition said.

Some activists said they expected a much more comprehensive and environmentally responsive order.

“We are looking into the order and will accordingly take a call on the further course of action,” said Sanjay Seth of Sambandh Health Foundation.

A 2016 parliamentary committee report on the effects of tobacco curing on the environment and health stated that tobacco curing and cultivation are not only destroying forests, but also contributing to the greenhouse effect.

“The committee is at a loss to understand the reasons for the limited success of using solar energy, biogas, and electricity for curing tobacco,” it stated. The report calls for an environmental impact assessment of the cultivation of tobacco to know its harmful effects.

“The remnant tobacco contributed to a degree of toxicity, which was conferred by the smoked filter alone. The fishes were found to be less sensitive to cigarette-butt leachate than previously tested daphnids. Smoking was found to have increased the toxicity of cigarette filters,” the study said.

“Discarded cigarette butts are not biodegradable, and they remain in the environment,” said Shaunak Modi, a marine researcher and member of Marine Life of Mumbai, an outreach program. “The cigarette butts are often picked up by birds. There are records of birds using them in the nest, thus exposing their young ones to toxic waste. The small animals by the sea also pick them up.”

The green tribunal’s order may be in a step in the right direction, but activists believe much more is needed.

“To start with, cities such as Mumbai need a proper garbage disposal policy,” said Modi. “In my opinion, the issue of cigarette butts should be tackled at the manufacturer level. Why not get the companies to make the cigarette butts biodegradable?”