Tasmanian Angel: Baby Wallaby Takes a Peek from its Pouch 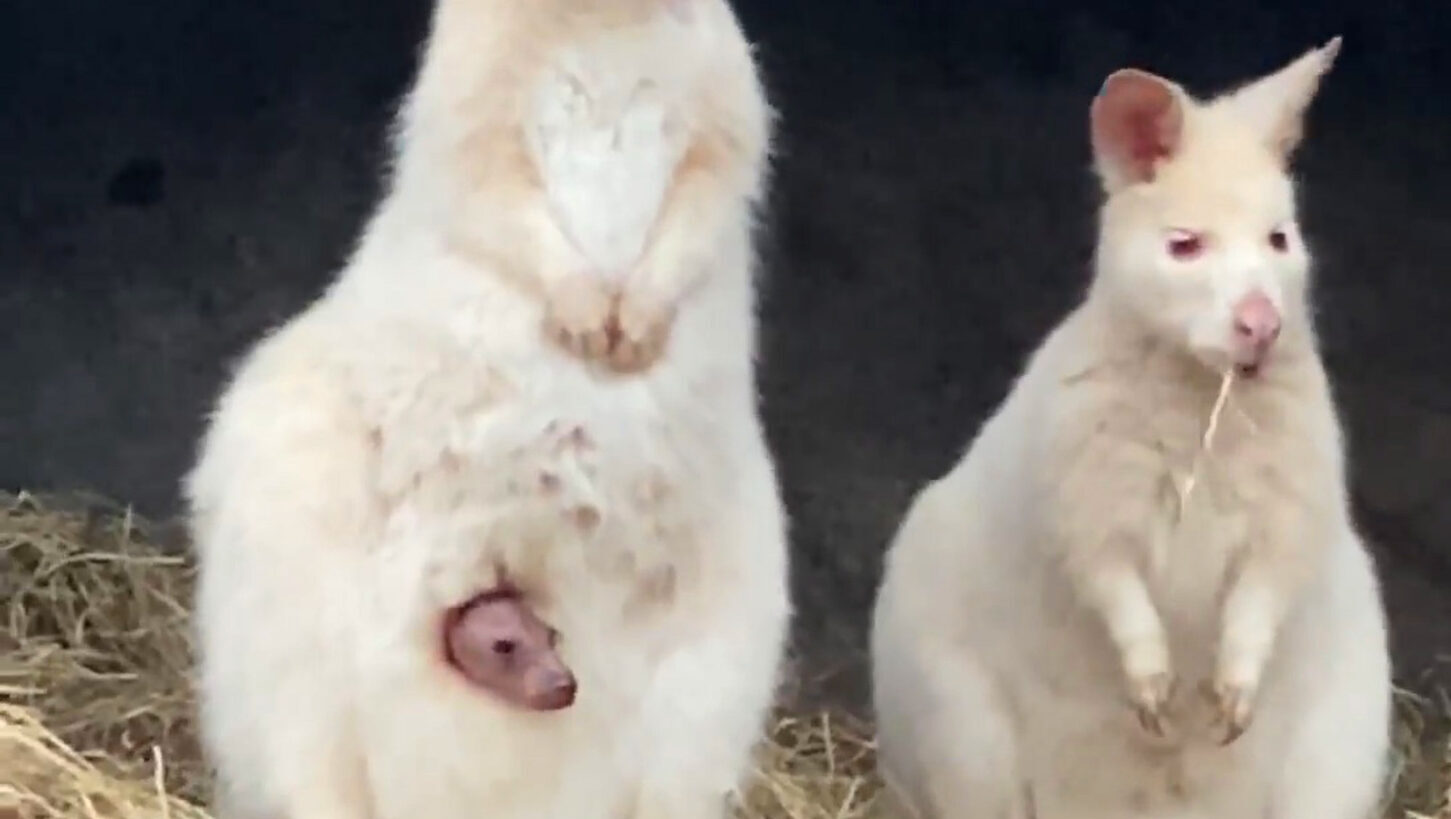 One little wallaby popping its head out from its mum's belly and the another wallaby is eats next to them. (@WingsWildlife/Clipzilla)

Visitors to a Tasmanian wildlife park got a sneak peak at a recent arrival: the joey of a red-necked wallaby (Macropus rufogriseus).

Video taken at the Wing’s Wildlife Park on the island state of Tasmania shows a wallaby’s offspring popping its head out of its mother’s pouch to check out the world at large. The mother wallaby is standing straight up on two legs with both ears pointed up while fixing her gaze on something when her joey – the Aborigine word for “small animal” – pops its small, hairless head out and takes a long look around.

The park shared the video and captioned it: “Hello little one. One of our Bennett’s joey has popped its head out to say hello.”

The red-necked wallaby is also referred to as Bennett’s wallaby. Such creatures are named for the reddish fur on their napes and shoulders, according to the Animal Diversity Web. Though they have a white chest and belly, the rest of their bodies are gray. In addition, the ADW says such wallabies typically come in litters of one, which means this little one is probably not sharing the pouch with any siblings.

Like kangaroos, wallabies are marsupials, which means they give birth to underdeveloped young which spend up to seven months in their mother’s pouch. Though kangaroos and wallabies are similar in many other respects and both are found throughout Australia and Tasmania, their most apparent difference is their size: Kangaroos are much bigger, standing as tall as 6.5 feet and weighing 200 pounds, while wallabies only grow to about 3 feet tall and weigh around 50 pounds.

As for the outlook for the joey wallaby’s kin, it’s gotten better in recent years, the ADW notes: “Red-necked wallabies have been trapped extensively for fur and persecuted by ranchers who claimed that they competed with cattle and sheep for grass. Forest clearing has also reduced their numbers in some places.

“However, population numbers have recovered in recent years and they are now common to abundant throughout most parts of their range. The species is protected by law in all states in which it occurs, but it may be killed under license as a pest of crops or pastures or during open seasons in Tasmania.”

Given its relatively stable situation, the International Union for Conservation of Nature’s “Red List of Threatened Species” categorizes the wallaby’s foreseeable future as being of “least concern.”