Craftsmen are making traditional toys out of industrial fiberboard instead of the softwood they have used for generations. 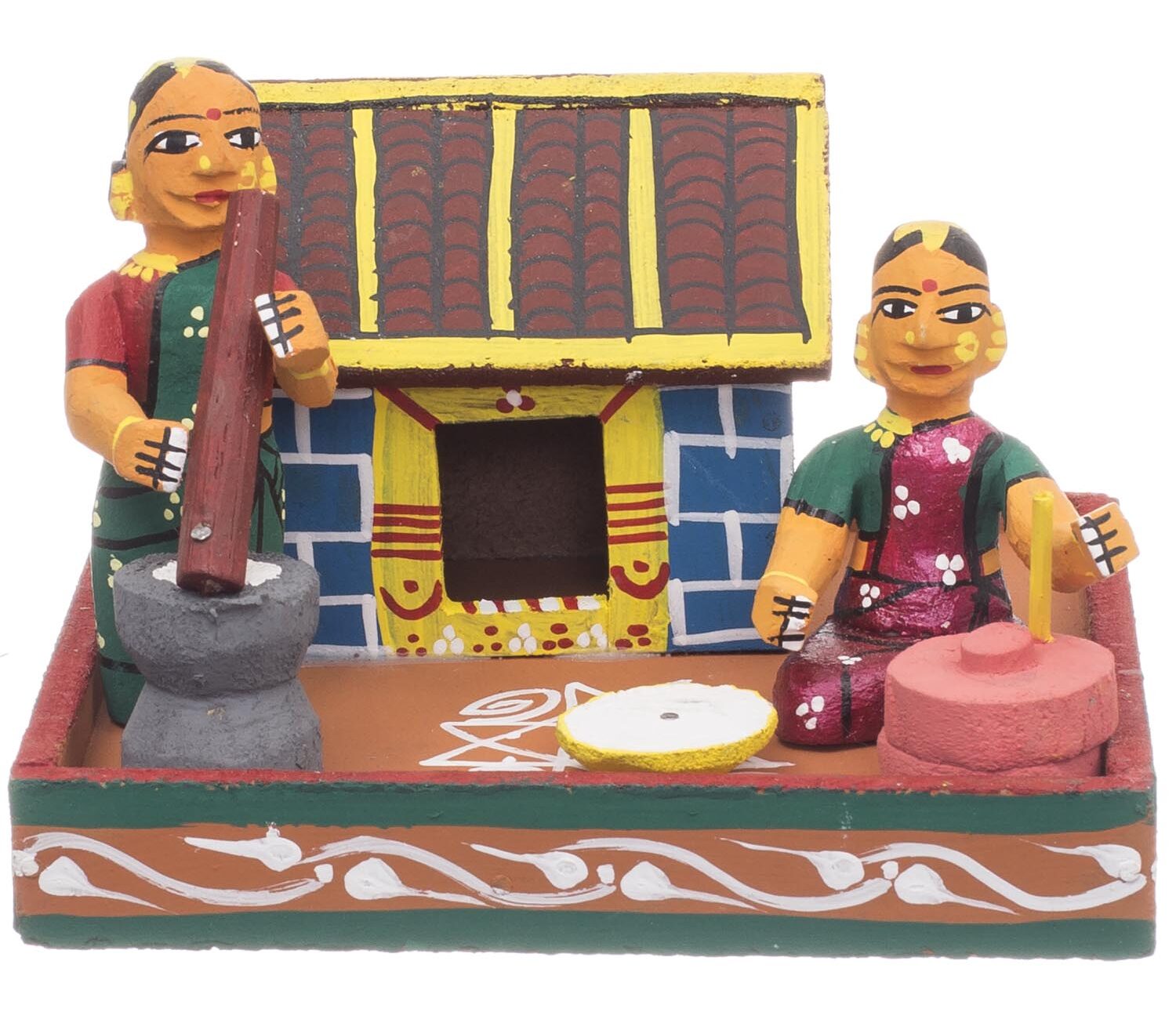 Scene at a village home created in wood. (Courtesy of CraftCoup)

India’s regional toy-making traditions are in danger, because artisans can’t find enough of a particular kind of wood.

South India’s vibrantly colored heritage toys could disappear, along with those from the states of Andhra Pradesh, Karnataka, and Tamil Nadu

Toy makers are finding it difficult to sustain themselves, in part because of the wood shortage but also because many Indian parents show little interest in teaching children about their heritage.

“For toys, we need a softwood called Tella Poniki,” said Surya Prakash, a toy maker in Kondapalli. The government is trying to plant trees to meet the shortfall, but that will take a few years to show results. ’Til then, we will diversify our product-base to continue our business.” Prakash has been trying to replace Tella Poniki with MDF, medium density fiberboard, an industrially produced artificial building material.

Kondapalli has been a hub of toy-making for more than 400 years. Many artisans in this area come from families who have been practicing this art for generations.

Mahender Rakhshi, who runs an online-aggregating platform for traditional toys, said that Kondapalli toy makers associated with his platform are exploring other raw materials like terracotta and papier-mache to make their products.

“Toy makers are even making the famous dancing-dolls of Thanjavur [a city in Tamil Nadu],” said Rakhshi. “It will take time, but they are trying to evolve.”

In addition to these issues, toy makers are also facing the problem of labor. Surya Prakash said that there are only about 60 people left in Kondapalli who are making handmade toys. He said that the production is so little that exporting is not an option for them.

“We can make just about enough to sell in the local markets of Kondapalli and send it to handicraft emporiums across the country,” said Prakash.

“Last year, we got a huge order of miniature bullock-carts for a destination wedding in the Middle East. However, we could not accept the order because we lacked the manpower,” said Rakhshi

Rakhshi said that many toy makers are being forced to leave this business for jobs in alternative sectors.

Channapatna is a town around 37 miles (59.55 km) from India’s tech-hub Bengaluru. It has earned the moniker “Toy City.” Former first lady of the U.S., Michelle Obama, visited the city in 2010.

The chief minister of Karnataka BS Yediyurappa, on Aug 30, announced that Koppala would be made a toy manufacturing cluster — a special economic zone that will generate 40,000 jobs in five years.

Toy makers in Channapatna, where the traditional toy industry exists, however, are looking for opportunities in the anti-China sentiment that has spread across the globe. But, they worry that they do not have enough manpower and ways to market themselves.

“We are not sure if our toy makers in Kondapalli and Channapatna can take up all orders that might come their way in the wake of the current anti-China sentiments,” said Rakhshi.

“We are used to displaying our toys at local fairs and sending them to handicraft emporiums run by the Karnataka government,” said B. Raju, a toy maker in Channapatna. “Foreigners buy our products when they come to these fairs or when they visit Channapatna.”

A 2017 study conducted by the economic services group of the National Productivity Council  stated that 96 percent of traditional toy makers do not export their products. The study said that these manufacturers are not aware of export procedures. It also suggested that most toy manufacturers are self-financed and lack institutional support.

The toy industry was worth $1.75 billion in 2019, according to an IMARC study. A major part of the toy sector is unorganized, the NPC report said.

While traditional toys, from dancing dolls to wooden kitchen sets, were once a part of an Indian child’s toy box, today many have been replaced with plastic ones.